9 Scripting Languages You Need To Know
(Click image for larger view and slideshow.)

At its Android Developer Summit on Monday, November 23, Google previewed Android Studio 2.0, the next version of its Android integrated development environment (IDE).

Google introduced Android Studio at Google I/O 2013 as an alternative to the open source Eclipse IDE. While Eclipse is still widely used and is suitable for a variety of programming languages, Android Studio offers developers a tool specifically tuned to Android development. For example, it includes a project automation tool called Gradle as an alternative to Apache Ant. Many developers have observed that this makes the application build process more efficient.

Google's interest in developing Android Studio extends beyond delighting developers with better tools. The company also has to consider comparisons between its tools and those offered by rivals. Both Apple's Xcode and Microsoft's Visual Basic are used by millions of developers worldwide, and are considered fairly polished tools for creating apps. Google has to ensure that Android development tools are competitive. 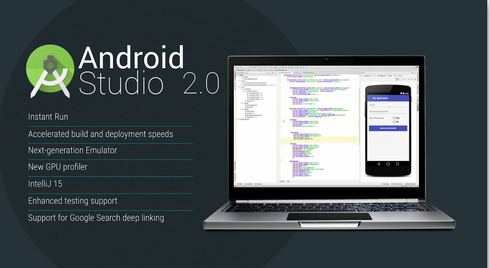 Android Studio 2.0 promises faster builds and deployment, and it adds a feature called Instant Run that allows developers to see the effect of code changes on a connected device or emulator immediately. Such feedback can accelerate the development process considerably.

It also adds a GPU Profiler, a tool that can help identify performance problems related to GPU bottlenecks or inefficient code.

"One of the big problems with graphics-intensive development is you'll see a scene and you get a problem," explained Stephanie Cuthbertson, Google product manager for Android, at the event. "And you're not really sure exactly what caused it. So one of the things you'll find in the GPU Profiler is you're able to record and replay the entire GPU stream frame by frame."

While GPUs traditionally have helped accelerate applications that rely on sophisticated graphics, they've become increasingly important for data-intensive applications, such as cryptography and machine learning.

In addition, Android Studio 2.0 adds support for Google Search deep linking, the process by which developers can make internal app content visible to those using Google Search. Through a feature called Intention Actions, Android Studio 2.0 will suggest placement and configuration for deep link code. It also includes static analysis, to alert developers when deep links have been misconfigured, and real-time testing, to show how Google will index and render app pages.

[Read about Google's efforts to improve its cloud offerings.]

Android Studio 2.0 won't be released until next year, presumably in conjunction with Google I/O 2016, but it's available in Android Studio's canary release channel, so developers can provide feedback prior to the stable release.

Thomas Claburn has been writing about business and technology since 1996, for publications such as New Architect, PC Computing, InformationWeek, Salon, Wired, and Ziff Davis Smart Business. Before that, he worked in film and television, having earned a not particularly useful ... View Full Bio
We welcome your comments on this topic on our social media channels, or [contact us directly] with questions about the site.
Comment  |
Email This  |
Print  |
RSS
More Insights
Webcasts
Protecting Mobile Apps and APIs from the Inside Out
How Cyber Attackers Will Use & Abuse AI, ML Against the Enterprise
More Webcasts
White Papers
Getting Cloud Management Right
Economies of Database Scale Achieved
More White Papers
Reports
State of Endpoint Security: How Enterprises Are Managing Endpoint Security Threats
An Insider's View into a Supply Chain Attack
More Reports

Google's development tools have lagged behind Apple and Microsoft. It's good to see Apple catching up. There is so much variety in Android devices that it's difficult for emulators and developers to deliver consistent user experience.
Reply  |  Post Message  |  Messages List  |  Start a Board

@Nasimson: Exactly. Ever since Eclipse ADT and Android Studio mixed together to form a universal IDE for Android, I think this will be good for all the app developers around the world.
Reply  |  Post Message  |  Messages List  |  Start a Board

@Sunita: AppStore are in competition to woo developers to wire their first app on their platform. Especially smaller AppStore like Microsoft and BB.
Reply  |  Post Message  |  Messages List  |  Start a Board

MS is better off than BB as of this moment. I reviewed the Priv. It isn't top of the line for a flagship device running android. Nevertheless it is a practical device. MS is trying hard to get developers on board for the universal app store, and with the release of the Lumia 950, more apps are needed than ever.
Reply  |  Post Message  |  Messages List  |  Start a Board

The Instant Run is a huge boon to fast development. No more waiting to deploy on the connected device! Maybe Google can update the API for cloud connection inside the app. It's totally complicated.
Reply  |  Post Message  |  Messages List  |  Start a Board

Where was the instant run when my team was developing android apps?!
Reply  |  Post Message  |  Messages List  |  Start a Board

I also think the both together, Google and Eclipse, can bring great things to the developer community.
Reply  |  Post Message  |  Messages List  |  Start a Board
Editors' Choice
Hot Topics

Study: Cloud Migration Gaining Momentum John Edwards, Technology Journalist & Author,  6/22/2020
White Papers
Getting Cloud Management Right
The Threat From the Internet--and What Your Organization Can Do About It
Critical Capabilities for Attack Surface Management
Securing Financial Data From Within
Why Now Is the Time for Security Validation