At last, app-dependent travelers can get directions even in areas with no network connection. But it's only for Android users, for now.

Google has updated Maps for Android so it will provide navigation assistance and searchable location data while offline.

"Now you can download an area of the world to your phone, and the next time you find there's no connectivity -- whether it's a country road or an underground parking garage -- Google Maps will continue to work seamlessly," said Amanda Bishop, Google Maps product manager, in a blog post. Offline navigation in Maps for iOS is "coming soon," she also noted.

Google previewed its plan to make turn-by-turn directions available offline at the Google I/O developer conference in May.

Google has been slow to make its products function offline. This may have something to do with the company's commitment to an ad-based business model and to cloud computing, both of which depend upon network connections to remote servers.

Offline usage isn't necessarily a denial of information to Google. According to a company spokesperson, offline searches get added to the user's search history once a connection is reestablished. But, of course, without a network signal there's no location data to be had. 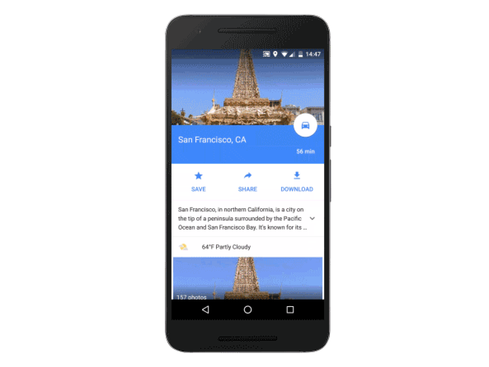 Google took steps to implement offline functionality in Google Apps back in 2007 with the introduction of a technology called Google Gears. By 2009, Gmail could cache messages for offline access. But Google abandoned Gears by 2010 when the HTML5 specification provided a standards-based way to create offline Web apps.

In 2011, Gmail, Calendar, and Docs began getting offline capabilities, but even then, despite acknowledging that customers wanted their Web apps to work offline, Google didn't seem sold on the idea. Rajen Sheth, product manager for Google Apps at the time, said, "Offline is not necessarily an everyday use-case. People are online most of the time now."

Now, consider Bishop's more recent characterization of network availability. "Roughly 60% of the world is without Internet today, and even where online access is available, it can still be spotty," she said. And note the change in messaging from Google's Chrome developer website: "Because Internet connections can be flakey or non-existent, you need to consider offline first: write your app as if it has no Internet connection."

Google's focus has become more global, and Android has moderated the importance of the cloud. Android apps are expected to do much more than Web apps when they are offline, even if Web technology has advanced to the point where Web apps can run locally. Offline is no longer discussed as an edge case.

Maps has had the ability to cache map regions for display in the absence of a network connection since 2012. But Google removed this feature in 2013 when it released a version of Maps tuned for tablets. The company subsequently restored the ability to store map regions offline after users complained.

[Read Why Android Fragmentation Is a Good Thing.]

Maps for Android deepens Google's commitment to utility without connectivity. It provides not only turn-by-turn directions for the disconnected, but searchable location data about destinations, including hours of operation, contact information, and ratings.

To download data for a local area, search for a location and tap the "Download" button on the resulting place sheet (while you have a network connection). You can also use the Google Maps menu to access "Offline Areas" and tap the "+" button. Once an area is downloaded, the Maps app will automatically switch to the cached data when a network signal is unavailable.

All that remains for Maps users to do to avoid getting lost is maintain battery power long enough to arrive at the desired destination.

Thomas Claburn has been writing about business and technology since 1996, for publications such as New Architect, PC Computing, InformationWeek, Salon, Wired, and Ziff Davis Smart Business. Before that, he worked in film and television, having earned a not particularly useful ... View Full Bio
We welcome your comments on this topic on our social media channels, or [contact us directly] with questions about the site.
Comment  |
Email This  |
Print  |
RSS
More Insights
Webcasts
The Failures of Static DLP and How to Protect Against Tomorrow's Email Breaches
Strategies for Success with Digital Transformation
More Webcasts
White Papers
How to Prioritize Risk Across the Cyberattack Surface
Cyber Threats & Trends: Jan-June 2020
More White Papers
Reports
Special Report: The Changing Face of Threat Intelligence
DNS Network Traffic Volumes During the 2020 Pandemic
More Reports

I am looking forward to see offline version of Google Maps on iOS. Apple map is good as well but somehow I prefer Google Maps since I have been using it for such a long time...
Reply  |  Post Message  |  Messages List  |  Start a Board
Editors' Choice
Hot Topics