Expect a demonstration of the next version of Android, along with a standalone photo-sharing service and a new iteration of Chromecast.

Google's developer conference, Google I/O 2015, begins on Thursday, and much of the agenda has been detailed already or hinted at in articles, leaks, or inadvertent disclosures.

Undoubtedly there will be surprises. But here's what we expect to see at the show.

Android M. Android is arguably Google's most significant consumer-facing product these days, even if it's not the company's main source of revenue. No Google developer conference would be complete without an introduction to the next version of Google's mobile operating system.

Google VR. Google has several virtual-reality-related projects and investments and would benefit from a more coherent approach. The company has committed to producing another version of Google Glass and has had success with its Google Cardboard VR headset. So it would make sense to enhance the Cardboard SDK for Android by adding support for Google Glass 2, or to release an entirely new Glass SDK for VR and AR (augmented reality). Google needs to do something to underscore its commitment to VR so that Facebook and Oculus don't dominate whatever market emerges.

Women. USA Today reports that Google has made a conscious effort to increase the number of women attending Google I/O. Women represented only 8% of attendees in 2013, according to Google. So Google has been offering tickets to women-in-technology groups to encourage them to attend. Last year, 20% of Google I/O attendees were women, and this year that figure is expected to reach 23%. Silicon Valley is not known for its diversity.

Google Photos. Google+ previously subtracted Google Hangouts from its portfolio to allow the communications service to stand alone. Now, Google Photos is ready to go solo, according to Bloomberg, though in doing so it is expected to become more integrated with Facebook, Google+, and Twitter. Google is somewhat late to the game. Apple recently released a revised Photos app for iOS and OS X, and Amazon last year launched Prime Photos. 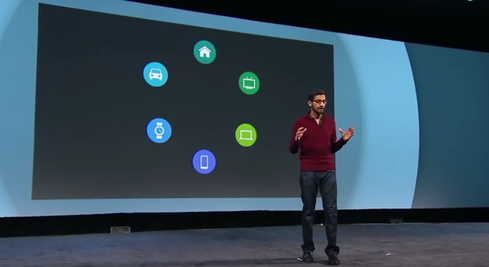 Brillo. Google is developing an operating system for resource-constrained Internet-of-Things devices called Brillo, according to The Information. The software is said to be a version of Android that can fit in as little as 32MB of memory. Android Lollipop presently requires 512MB of memory on 32-bit devices at common screen sizes. That requirement ranges from 416MB (Android Watch) to 1824MB (560dpi or extra large screen on a 64-bit device).

Chromecast 2. Google's Mario Queiroz talked about a new version of Chromecast late last year, and the Google I/O schedule includes a session that deals with developing Chromecast games. Given that it has been two years since Chromecast debuted, it's about time to refresh the hardware with 802.11ac support.

Easier Login. Earlier this month, TechCrunch noted that Google has separated its name and password login form elements so they occupy separate pages. In its product forum, a Google representative explained the change thus: "...we're working toward introducing new authentication solutions that complement traditional passwords." Having already made this separation on Android last year, Google appears to be preparing to allow users to log in to its services more easily, perhaps by making two-factor authentication automatic in some instances.

Polymer 1.0. Last year, Google introduced a JavaScript library called Polymer for making modular Web components, chunks of code that generate familiar Web elements such as sliders. Though there appear to be more JavaScript frameworks and libraries than anyone really needs -- Mozilla has a similar project called X-Tag -- Polymer has attracted significant developer interest because of Google's clout in the industry, and because it promises to make Web code easier to create, manage, and reuse. The presence of a session devoted to Polymer 1.0 indicates that the code library is mature enough to promote more widely.

ATAP Wearable. Google's Advanced Technology and Projects Group (ATAP) teased "wearables that we hope will blow your socks off" in a deliberately cryptic preview of its Google I/O session. That sounds signficant. ATAP is also the group overseeing Project Ara, Google's modular smartphone. At the beginning of the year, Paul Eremenko, head of Project Ara, said that the third iteration of Google's modular phone prototype, Spiral 3, is planned for second quarter 2015. The Spiral 3 endoskeleton, Eremenko said, will support hardware module communication via inductive connections rather than direct electrical contacts.

Live Imagery. There's a session at Google I/O titled "The Earth in Real Time," at which the company intends to discuss Skybox, a satellite imagery company acquired last year. It's too soon for Street View Live (and with luck, we'll never see Google cameras watching everything in real time), but Google may be ready to make live video feeds of certain areas available to corporate clients, perhaps through Google Earth Enterprise.

Thomas Claburn has been writing about business and technology since 1996, for publications such as New Architect, PC Computing, InformationWeek, Salon, Wired, and Ziff Davis Smart Business. Before that, he worked in film and television, having earned a not particularly useful ... View Full Bio
We welcome your comments on this topic on our social media channels, or [contact us directly] with questions about the site.
Comment  |
Email This  |
Print  |
RSS
More Insights
Webcasts
Protecting Your Enterprise's Intellectual Property
Building the SOC of the Future: Next-Generation Security Operations
More Webcasts
White Papers
A Practical Guide to SASE Migration
The Insecure State of Microsoft Teams Security
More White Papers
Reports
Assessing Cybersecurity Risk in Todays Enterprises
Are Unprotected Cloud Databases Leaking Your Data?
More Reports

@Charlie: I didn't know about this project but it seems intersting. Though I wonder what Google might be looking to acquire out of this project. Are they possibly planning to move towards a Linux based architecture?
Reply  |  Post Message  |  Messages List  |  Start a Board

One of the things that Android may be missing right now is an integration with the big screen and a technology to project content over the big screen. Right now, the smartphones are almost becoming as powerful as computers but the small screen is a limitation which is why people still have to use laptops. Android should do something about this.
Reply  |  Post Message  |  Messages List  |  Start a Board

Tomk, the choice of the name Next worked out nicely for Steve Jobs, during his years away from Apple. Maybe that luck will hold for the Google cloud as well.
Reply  |  Post Message  |  Messages List  |  Start a Board

Google may wait on that since the company has scheduled a Cloud Platform event called Next in mid-June.
Reply  |  Post Message  |  Messages List  |  Start a Board

Last year, Google chose Google I/O to talk about its experience in launching and managing Linux containers as part of its infrastructure, an important addition to what had been a discussion focused mainly on Docker. It also made Kubernetes an open source code project. As the only company launching 2 billion containers a week, I hope there are updates on those fronts.
Reply  |  Post Message  |  Messages List  |  Start a Board
Editors' Choice
Hot Topics