On Wednesday Google plans to introduce several changes to Google Apps that aim to enhance collaboration and content creation.

In a phone interview, Ryan Tabone, director of product management at Google, described the update as an effort to make the collaboration features in Google Apps more useful and productive.

For Docs, Tabone said Google plans to add a button at the top of the screen, "See new changes." The idea is to make revision tracking more accessible and easier to attribute to a specific document collaborator.

Some users tag their changes using the Comments option, said Tabone, but not everyone remembers to do so, making change attribution more of a challenge. "See new changes" provides quick access to recent changes. There's also the more extensive "See revision history" option in the File menu of Docs for a more comprehensive record of changes. 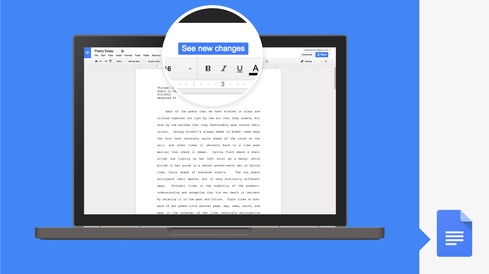 Tabone said that Google, in keeping with its commitment to collaboration, also wants to refine the process by which people research, refine, structure, and distribute their thoughts using online tools. Toward that end, the company is extending its Research tool to Android devices. Research applies machine learning to make online media creation easier.

"Increasingly, we're seeing enterprises asking how to make employees more productive," said Tabone, who noted that on a mobile device it can take more than 14 steps just to insert an image into a document.

Released in 2012 for Docs, and now available on Docs for Android, Research simplifies the process of finding images or text and adding them to a Docs file.

[Read about Google's Next thermostat upgrade.]

Google Forms has been beefed up with a variety of new templates for Docs, Sheets, and Slides.

Voice input, common on mobile devices, is now built into the Web version of Google Docs through a feature called Voice Transcription. The feature is accessible from the tools menu in Chrome. Tabone said that Docs users can now dictate long-form documents in 40 languages and insert punctuation and new lines by voice as needed. 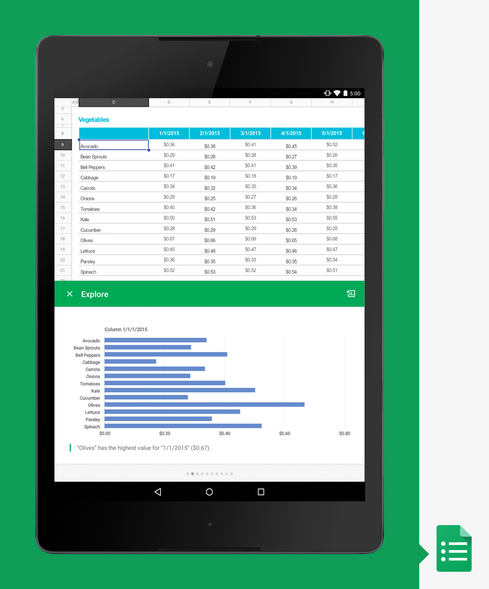 Finally, there's a Google Sheets feature called Explore that will automatically analyze spreadsheet data and generate charts from it. You simply select data in a spreadsheet and then select Explore. Google will interpret and present the data.

"There's so much overhead in learning presentation tools and structuring and capturing data," said Tabone. "This is a way to shorten that flow."

Thomas Claburn has been writing about business and technology since 1996, for publications such as New Architect, PC Computing, InformationWeek, Salon, Wired, and Ziff Davis Smart Business. Before that, he worked in film and television, having earned a not particularly useful ... View Full Bio
We welcome your comments on this topic on our social media channels, or [contact us directly] with questions about the site.
Comment  |
Email This  |
Print  |
RSS
More Insights
Webcasts
Securing and Monitoring Networks in the 'New Normal'
Building the SOC of the Future: Next-Generation Security Operations
More Webcasts
White Papers
The Network for Whatever's Next; A CxO Guide
IDC Workbook: Best Practices for Cloud Security
More White Papers
Reports
Are Unprotected Cloud Databases Leaking Your Data?
Special Report: Understanding Your Cyber Attackers
More Reports

Improved change tracking is certainly something I've been waiting for from Google Apps. The platform is different than other productivity options because it is so easy to collaborate. Problem is, it is always hard to keep track of changes.

This is going to improve the experience by a lot in my estimation.
Reply  |  Post Message  |  Messages List  |  Start a Board

Those all sounds like great features to improve collaboration. The Explore option mentioned at the end is probably one of those I'd use most of all. In my environment, we have to be creative about how we tell the story of enabling business with technology. Visualizing that data is a critical piece of that puzzle. If Google can help make that easier and more intuitive, I'm sold.
Reply  |  Post Message  |  Messages List  |  Start a Board

I am really pleased to hear about the Voice Transcription feature for Google Docs. Being able to dictate long-form documents could be useful, if and only if it works well. I haven't used the Voice input on iPad, have you? Google should make inserting images and links on Google Docs on mobile devices easier. -Susan
Reply  |  Post Message  |  Messages List  |  Start a Board
Editors' Choice
Hot Topics