IDEs, as the name suggests, integrate a variety of different developer tools into a single application to simplify the process of writing, managing, and building apps. Although many developers rely on text editors and command-line tools, IDEs can make development much easier.

Google provided Android developers with a preview version of Android Studio at its developer conference last year. The 1.0 release brings improvements suggested by beta users and general stability fixes. Android Studio can be thought of as Google's answer to Apple's Xcode.

Android Studio might prove tempting for users of Eclipse, an open-source Java-based IDE that supports a variety of different programming languages through plugins. Studio is based on the IntelliJ IDEA Java IDE and tends to be more responsive and less demanding of computing power than Eclipse. It relies on a Gradle-based build system, which has been decoupled from the IDE itself. This means app builds can be done inside or outside the IDE and IDE updates don't affect builds. Eclipse uses Apache ANT. 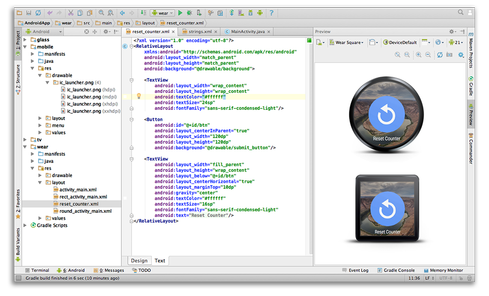 Android developers that have spent a lot of time in Eclipse might be reluctant to switch to a new build tool chain. But Google says it has stopped development on the ADT Plugin for Eclipse, a move that might be rephrased as "migrate now."

Thomas Claburn has been writing about business and technology since 1996, for publications such as New Architect, PC Computing, InformationWeek, Salon, Wired, and Ziff Davis Smart Business. Before that, he worked in film and television, having earned a not particularly useful ... View Full Bio
We welcome your comments on this topic on our social media channels, or [contact us directly] with questions about the site.
Comment  |
Email This  |
Print  |
RSS
More Insights
Webcasts
Building the SOC of the Future: Next-Generation Security Operations
ROI and Beyond for the Cloud
More Webcasts
White Papers
Centralized Security Policy Management Across Hybrid Cloud Environments Should be an Obvious Strategy
From MFA to Zero Trust
More White Papers
Reports
The State of Threat Detection and Response
2021 Top Enterprise IT Trends
More Reports