The development would put Google in direct competition with online retailer Amazon, which pays Google more than any other company for search ads.
8 Google Projects To Watch in 2015
(Click image for larger view and slideshow.)

Following in the footsteps on online retail giant Amazon and Web-based auction house eBay, search and advertising powerhouse Google is reportedly working on a button-based feature that would allow users to instantly buy products they search for.

According to a May 15 report in The Wall Street Journal, which quoted unnamed sources familiar with the development, the ability to make instant purchases based on search results will be deployed on Google's mobile browser.

Once users have selected the purchase option, which will only accompany sponsored search results, they are taking to a separate page where they can chose shipping options, make other customization choices like color or size, and then complete the purchase.

Google is reportedly in talks with Macy's department store as a launch partner, and the article also stated the Google won't be offering the service as a feature of its desktop browser.

The WSJ article indicated some retailers are worried the feature could serve as a barrier in the relationship between stores and consumers. 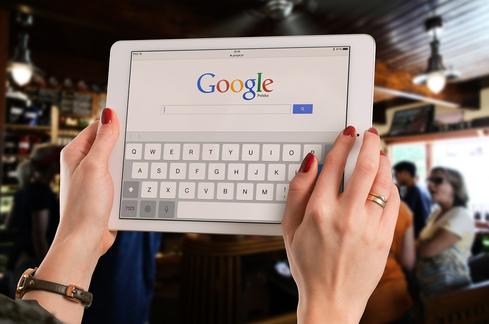 "To mollify retailers' concerns, Google will allow consumers to opt into the same marketing programs that they would be exposed to had they made the purchase on the retailer' own websites, one of the people said," according to the Journal. "That means retailers will get address information and likely email addresses for future marketing efforts as long as shoppers opt in."

The paper first reported Google's plans to develop such a feature in December 2014, a strategy that would put the company in direct competition with online retailers like Amazon, which currently dominates the market.

The move could certainly ruffle feathers at Amazon, which spent nearly $160 million on Google US search ads in 2013 -- far more than any other company.

Overall, the top 25 US search ad buyers alone spent $1.34 billion in 2013 on Google, according to Ad Age DataCenter's first ranking based on data from AdGooroo, a Kantar Media company focused on search marketing.

By 2018, mobile search spending will reach $28.41 billion, or 85.9% of the US digital search advertising market, according to a June 2014 report from eMarketer.

Google owned 82.8% of the $2.24 billion mobile search market in 2012, the report noted, and as the market continues to fragment it is adding additional features to its mobile-centric search platform to attract new revenue. (Google's share dropped to 68.5% in 2013, as other players have ramped up their efforts to become the entry portal for mobile information.)

Earlier this month the company revealed more of its searches take place on mobile devices than on computers in 10 different countries, including the US.

In light of this trend, Google also instituted changes to its search algorithm that give greater weight to those sites that work well on mobile devices, as well as making updates to AdWords, the company's online advertising service.

Nathan Eddy is a freelance writer for InformationWeek. He has written for Popular Mechanics, Sales & Marketing Management Magazine, FierceMarkets, and CRN, among others. In 2012 he made his first documentary film, The Absent Column. He currently lives in Berlin. View Full Bio
We welcome your comments on this topic on our social media channels, or [contact us directly] with questions about the site.
Comment  |
Email This  |
Print  |
RSS
More Insights
Webcasts
What We Can Learn from Sports Analytics
Strategies for Success with Digital Transformation
More Webcasts
White Papers
The Essential Guide to Securing Remote Access
The Insecure State of Microsoft Teams Security
More White Papers
Reports
Assessing Cybersecurity Risk in Todays Enterprises
Are Unprotected Cloud Databases Leaking Your Data?
More Reports

Read this I am not surprised that Google had not done something like this much earlier. I guess previously they did not want to ruffle Amazon's feathers, but for some reason now they don't care.

I think the online shopping experience still has some room for improvement. Google probably is in the best position to do that – they are really good at making easy to use consumer products. I just think they really need to tighten up the overall Android experience in order to properly pull it off.
Reply  |  Post Message  |  Messages List  |  Start a Board
Editors' Choice
Hot Topics