Over the weekend, the Vietnamese developer of Flappy Bird removed his app from the iTunes App Store and Google Play at the height of its popularity, leaving people perplexed, money on the table, and opportunists scrambling.

On Saturday, via Twitter, Nguyen Ha Dong announced his plan to withdraw Flappy Bird from app stores in less than a day. The Hanoi-based game maker then did as he said he would on Sunday, turning the app into an instant collector's item.

Nguyen said he's overwhelmed by the attention that accompanied sudden, worldwide recognition for a game that surged to the top of app store download charts around the globe at the beginning of the month. "I cannot take this anymore," he explained in the tweet announcing the takedown. Separately, he acknowledged the success of his game, but said, "...it also ruins my simple life. So now I hate it."

The free, ad-supported game has been downloaded more than 50 million times. In an interview with The Verge last week, Nguyen said the app has been generating an average of $50,000 in mobile ad revenue per day. According to Vietnam's VnExpress, the game's success also brought in emails from other developers who claimed Nguyen had copied elements of their games.

Reuters on Sunday reported that two friends of Nguyen's claimed the developer had received a legal threat from Nintendo and that Nintendo said it does not intend to file a lawsuit -- which is not a denial that it sent a cease-and-desist letter. Kotaku characterized Flappy Bird as a ripoff of Nintendo's Super Mario Bros, while others have said the game appears to be merely inspired by Nintendo's classic game. 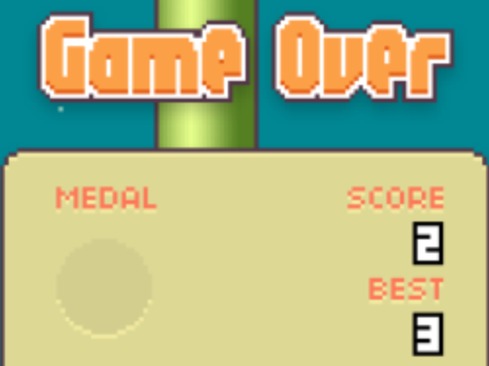 Nguyen himself responded to Kotaku's assessment by saying he didn't steal anything. He also insisted his decision to remove the game had nothing to do with legal issues.

Still, a few of those observing the sudden success of Flappy Bird -- it was released in May 2013 and then saw a surge of downloads starting in November, according to metrics site App Annie -- see something suspicious in the game's swift rise.

A recent blog post from iPhone app marketing company Blue Cloud Solutions says the game's download statistics look like they're the product of bot activity, although post author Carter Thomas says he has no proof of this and allows for the possibility of a pure viral hit. 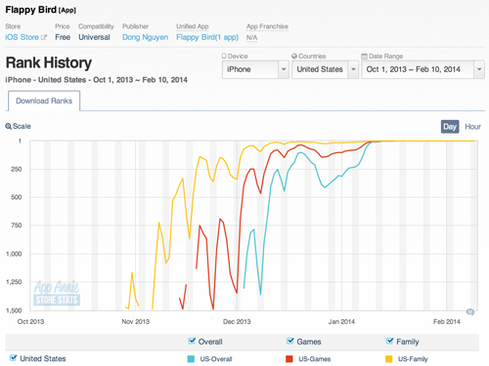 Meanwhile, some of those who managed to download the game before it was removed have decided to sell phones with the Flappy Bird app installed through eBay. eBay has almost 10,000 for-sale listings related to Flappy Bird, with some in the $10,000 to $50,000 range. Of the 200 or so Flappy Bird auctions that have already ended, most have concluded without a sale. However, someone appears to have managed to find a buyer willing to pay $10,000 for a phone with Flappy Bird on it. Another seller completed a sale for $7,100.

And in Apple's App Store and Google Play, apps using the word "Flappy" are proliferating, hoping for scraps of the popularity that Nguyen discarded.

Thomas Claburn has been writing about business and technology since 1996, for publications such as New Architect, PC Computing, InformationWeek, Salon, Wired, and Ziff Davis Smart Business. Before that, he worked in film and television, having earned a not particularly useful ... View Full Bio
We welcome your comments on this topic on our social media channels, or [contact us directly] with questions about the site.
Comment  |
Email This  |
Print  |
RSS
More Insights
Webcasts
Building the SOC of the Future: Next-Generation Security Operations
Making Cybersecurity Work in Small and Medium-Sized Businesses
More Webcasts
White Papers
Ahead of the Curve: Accelerate Cyber Response with DNS Insights
How to Compete in Financial Services IT
More White Papers
Reports
Assessing Cybersecurity Risk in Todays Enterprises
Special Report: Edge Computing: An IT Platform for the New Enterprise
More Reports

Interesting tagging along w/ my son to a video game mail order/showroom stocked w/ games one would have thought would be dead by now on i.e. Nintendo 64 platforms, and are still in big demand.

>This guy is the Dave Chappelle of mobile app developers.

Or the Disney of mobile app developers. Disney has long had a successful strategy of withdrawing its videos/DVDs from distribution for a few years to create scarcity and stimulate demand. It's probably worth trying for apps that get enough initial recognition. You can't buy this kind of PR.
Reply  |  Post Message  |  Messages List  |  Start a Board

This guy is the Dave Chappelle of mobile app developers.
Reply  |  Post Message  |  Messages List  |  Start a Board

I'm not a big gamer, of the deep or shallow variety, but might simple and mindless be a big part of the appeal of these games?
Reply  |  Post Message  |  Messages List  |  Start a Board

I'd love someone to develop a game that bridges that gap between these ultra casual experiences and something deeper and more meaningful. I think it's great that people are enjoying games more than ever, but these experieces are so shallow and forgetful, that they don't mean anything. All these people enjoying Candy Crush and Flappy Birds, if they could take the time to play a game that has a story, or deeper gameplay mechanics, I think they'd be amazed with the fun they could have and they're remember it afterwards - maybe even learn something.
Reply  |  Post Message  |  Messages List  |  Start a Board

I'm more a fan of The Impossible Game.  Very difficult, but with variety.
Reply  |  Post Message  |  Messages List  |  Start a Board

FWIW, numerous Redditors have suggested (and I doubt that they're wrong) that the "completed sales" on eBay are probably fakes, to get attention.

In any case, it's all the more unlikely that a phone with Flappy Birds on it is worth a small fortune if reports that the game is coming back are correct.
Reply  |  Post Message  |  Messages List  |  Start a Board

You have to respect a person who values happiness and simplicity over money. That's so rare these days.
Reply  |  Post Message  |  Messages List  |  Start a Board

I have heard before of success ruining the good life... but have no firsthand knowledge of it.
Reply  |  Post Message  |  Messages List  |  Start a Board

People doubting this was a viral hit weren't at the same basketball game I was at recently, as a dozen 7th graders sitting behind me dueled each other on their phones to topple the Flappy Bird champ. Sure sounded viral to me.
Reply  |  Post Message  |  Messages List  |  Start a Board
Page 1 / 2   >   >>
Editors' Choice
Hot Topics