Wheeler's proposed rules would classify broadband providers as common carriers, meaning they would be subject to the same open access rules that currently regulate telecommunications companies.

The proposal would mean that broadband providers -- identified by the FCC as the retail broadband services that Americans buy from cable, phone, and wireless providers -- would be governed under the same regulatory requirements as telecommunications companies. The distinction is an important one: Telecommunications providers are subject to stringent rules requiring open access to their networks as well as consumer privacy protections that currently do not apply to broadband providers.

The announcement marks a new phase in the long-running battle between broadband service providers, the technology companies that depend on them, the customers who rely on such services, and the regulators trying to ensure a level playing field.

Wheeler's proposal also puts mobile and wired broadband providers into the same bucket for the first time in the ongoing net neutrality debates. The announcement stated that, while the FCC's 2010 open Internet rules had limited applicability to mobile broadband, "The new rules -- in their entirety -- would apply to mobile broadband." The announcement goes on to state: "Today, 55% of Internet traffic is carried over wireless networks. This proposal extends protections to consumers no matter how they access the Internet, whether on their desktop computer or their mobile device."

A year ago, a federal court for the second time struck down the FCC's 2010 blocking and non-discrimination framework. The court disallowed the FCC's rules then because it found the agency was regulating Internet providers – defined by law as information services – as if they were telecommunications services.

The FCC's rationale for doing so was to prevent Internet service providers from discriminating against network traffic for their own gain, as AT&T did from 2007-2009 when it had an arrangement with Apple to block Skype and other VOIP services on the iPhone. It took FCC intervention to end that practice.

In an op-ed in Wired, Wheeler said he initially hoped to rely on an alternative regulatory regime, under which the actions of network operators could be judged by the standard of "commercial reasonableness" under Section 706 of the Telecommunications Act of 1996. "While a recent court decision seemed to draw a roadmap for using this approach, I became concerned that this relatively new concept might, down the road, be interpreted to mean what is reasonable for commercial interests, not consumers," he wrote.

AT&T, a company with considerable commercial interest in the way broadband network providers get regulated, is not pleased. In a blog post published Monday in anticipation of Wheeler's announcement, Hank Hultquist, VP of federal regulatory policy at AT&T, laid out the basis for a future legal effort to avoid classification as a common carrier.

Hultquist argues that the FCC cannot classify companies as common carriers without providing proof that they exercise market power in the area where the regulation is imposed. He also insists that broadband providers offer both information and telecommunication services, and thus cannot be classified only as one or the other.

Doug Brake, telecommunications policy analyst at the Information Technology and Innovation Foundation, a group funded by technology and telecommunications organizations, criticized Wheeler's plan in a statement: "The decision to classify broadband as a telecommunication service in order to apply common carrier regulations is an unjustified, overblown response to what has in actuality been a by-and-large hypothetical concern."

It's worth a moment to parse the language used by Brake. A "by-and-large hypothetical concern" differs from a hypothetical concern. The former happens rarely; the latter has not happened. Beyond AT&T's blocking of VOIP services, advocacy organization Free Press has documented at least a dozen instances where telecommunications companies have violated net neutrality principles, or have expressed interest in doing so. 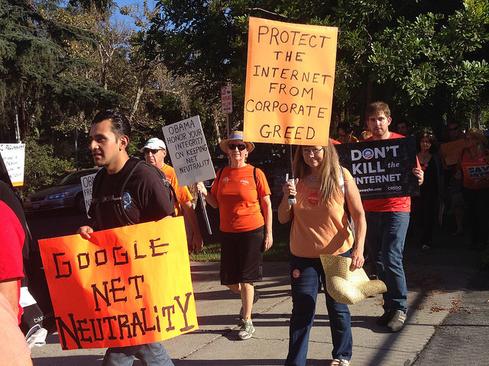 Net neutrality has broad support from the American public. A study released by the University of Delaware's Center for Political Communication in November found that 81% oppose "allowing Internet service providers to charge some websites or streaming video services extra for faster speed." And that support cuts across political lines.

The issue's popularity among Americans has not been lost on politicians. In November, President Obama urged the FCC to adopt tough net neutrality rules. And on Wednesday, Sen. Ron Wyden (D-Ore) and Sen. Chuck Schumer (D-NY) were among those expressing approval of Wheeler's proposal.

"Millions of American small businesses, consumers, and innovators spoke, and Chairman Wheeler listened," Wyden said in a statement. "Without the open Internet, startups will never leave the garage. The FCC should adopt this proposal and ensure that monopolies are never allowed to slam the door on American innovation."

In a statement, Schumer compared the Internet to the nation's highways of the 20th century, noting: "Today's Internet must be an open, unfettered road that spurs innovation, communication, and explosive economic growth. Under these new FCC rules it will be so for the next generation of American students, scientists, artists, and entrepreneurs."

Net neutrality is also being considered in Europe. On Monday, in a guest blog post to the European Commission's website, Tim Berners-Lee, the creator of the Web and founding director of the World Wide Web Foundation, warned that failure to protect the principle of net neutrality would lead to censorship.

"Maintaining this net neutrality is critical for the future of the Web and the future of human rights, innovation and progress in Europe," he said.

Thomas Claburn has been writing about business and technology since 1996, for publications such as New Architect, PC Computing, InformationWeek, Salon, Wired, and Ziff Davis Smart Business. Before that, he worked in film and television, having earned a not particularly useful ... View Full Bio
We welcome your comments on this topic on our social media channels, or [contact us directly] with questions about the site.
Comment  |
Email This  |
Print  |
RSS
More Insights
Webcasts
The Experts Guide to Ransomware Response
Multi-Cloud Data Management for Modern Applications
More Webcasts
White Papers
Guide to Enabling 5G Deployments
Top Serverless Security Risks and How to Mitigate
More White Papers
Reports
Are We Cyber-Resilient? The Key Question Every Organization Must Answer
Planning Your Digital Transformation Roadmap
More Reports