An email address is all that's required to create a user account. Hello, retro chatrooms?

Rooms was inspired by early forms of online interaction, says Facebook product manager Josh Miller, in a blog post. The goal of the app, he suggests, is to capture the spirit of early Web communities, of forums, message boards, and chat rooms where common interests and conversational contributions mattered more than concrete identities.

Rooms might aspire to be the mobile heir to the retro Internet -- before cookies, tracking, and privacy became mainstream concerns -- but it doesn't embrace anachronisms such as all-text environments, the whine of acoustic modems, or huge phone bills. It remains thoroughly modern in its commitment to promote content sharing. And in its abundance of vapid commentary, Rooms shows itself to be timeless.

The app, available only for iOS devices at the moment, allows users to create chat rooms that provide a feed of photos, text, and videos based on a user-determined topic. An email address is all that's required. Users can share room invitations using online channels or QR codes printed on paper. They can also restrict access to rooms by age and ban room visitors by nickname.

Miller says room creators can control the look of the room as well as the topic. But most significantly, they can control how they're identified. "One of the things our team loves most about the Internet is its potential to let us be whoever we want to be," Miller says. "...That’s why in Rooms you can be 'Wonder Woman' – or whatever name makes you feel most comfortable and proud." 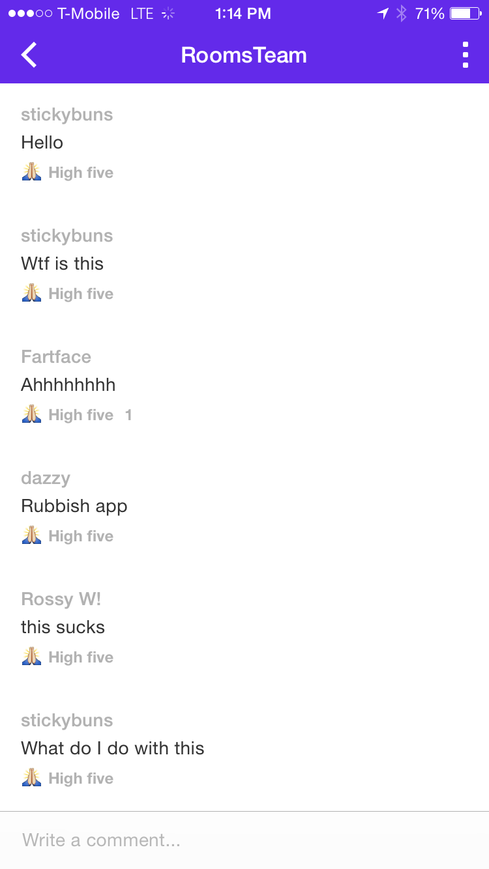 This differs from Facebook's name policy: "We require people to provide the name they use in real life; that way, you always know who you're connecting with. ...Pretending to be anything or anyone isn't allowed."

Facebook's policy has problems because it's inherently contradictory, allowing identity to be fluid while insisting it's fixed. Facebook recently acknowledged the difficulties of its approach after the company, responding to community reports of fake names, took action against the accounts of people in the LGBT community who go by their stage names.

In keeping with its embrace of pseudonyms, Rooms itself does little to identify itself as a Facebook product beyond the obligatory App Store vendor links. The app's Create an Account page notes, "By continuing you agree to our Terms of Service," without actually identifying whose Terms of Service have been offered for acceptance. Only if you click through is it clear that you're agreeing to Facebook's Data Use Policy and Cookies Policy for Rooms.

Rooms is a product of Facebook Creative Labs, which has de-emphasized Facebook in some of its other apps, such as Slingshot. In an interview with the New York Times in April, Facebook CEO Mark Zuckerberg explained that the company's all-in-one desktop experience doesn't work for mobile devices. "So what we're doing with Creative Labs is basically unbundling the big blue app," he said.

That's helpful from a design perspective, because mobile apps work better when they're focused on a few functions. And it might also help attract users who might otherwise avoid Facebook: The Rooms app comes without the baggage of the brand.

Thomas Claburn has been writing about business and technology since 1996, for publications such as New Architect, PC Computing, InformationWeek, Salon, Wired, and Ziff Davis Smart Business. Before that, he worked in film and television, having earned a not particularly useful ... View Full Bio
We welcome your comments on this topic on our social media channels, or [contact us directly] with questions about the site.
Comment  |
Email This  |
Print  |
RSS
More Insights
Webcasts
The Failures of Static DLP and How to Protect Against Tomorrow's Email Breaches
5 Steps to Solving Modern Scalability Problems
More Webcasts
White Papers
How to Prioritize Risk Across the Cyberattack Surface
The 2020 Duo Security Trusted Access Report
More White Papers
Reports
2020 State of DevOps Report
DNS Network Traffic Volumes During the 2020 Pandemic
More Reports

"That's helpful from a design perspective, because mobile apps work better when they're focused on a few functions. And it might also help attract users who might otherwise avoid Facebook: The Rooms app comes without the baggage of the brand."

Thomas, attracting more users is an important factor and I think this will helps for that.
Reply  |  Post Message  |  Messages List  |  Start a Board

@Thomas true. I think its a miscalculated move by FB as I am not seeing their intended audiance. I believe that time will tell the real story. I am keeping my fingures crossed onto this one and tightly  :)
Reply  |  Post Message  |  Messages List  |  Start a Board

I'm assuming Facebook believes it can monetize interest-based sharing. But it's not quite clear to me why anyone feels the need to do this on mobile phones.
Reply  |  Post Message  |  Messages List  |  Start a Board

I am having a strange flashback to Second Life. Remember that? Similar concept. I don't see who the desired audience is for FB.
Reply  |  Post Message  |  Messages List  |  Start a Board
Editors' Choice
Hot Topics