Apple's Maps service has been gaining traction in the years following its bumpy rollout, and the acquisition of Coherent Navigation could make the app even more precise with GPS technology.

News broke Sunday that Apple has made yet another acquisition in its attempt to improve its mapping technology, this time buying Coherent Navigation. The deal comes just a few weeks before the annual Worldwide Developers Conference in San Francisco.

On May 17, Apple sent a tacit acknowledgement of the deal in an email to The New York Times.

"Apple buys smaller technology companies from time to time, and we generally do not discuss our purpose or plans," the company said in the email.

The Bay Area company, which was founded in 2008 and has worked with companies like Boeing in the past, specializes in developing High Integrity GPS, also known as "iGPS," which uses satellite signals from the Iridium low-Earth orbit telecommunications system and the US Air Force-operated GPS mid-Earth orbit navigational satellites.

The result is an augmentation to GPS that provides iGPS receivers with improved navigation, higher signal integrity, precision accuracy, and more jam-resistant capabilities.

High Integrity GPS also has the potential to provide geographic positioning data to within centimeters, a vast improvement over current stand-alone GPS, which provides data within meters. 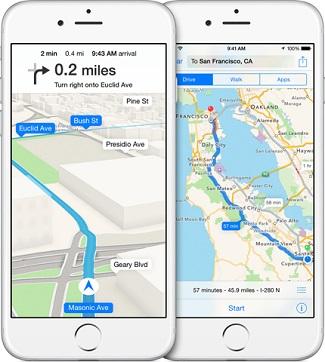 Coherent Navigation's former CEO, Paul Lego, began working for the Apple Maps team in January, according to his LinkedIn profile.

Apple's initial rollout of its Maps application in 2012 headed south almost immediately, with users complaining of multiple errors -- a backlash so strong that CEO Tim Cook was forced to publish an apology.

The disastrous launch also led to the firing of Scott Forstall, senior vice president of iOS software and the person directly responsible for mapping.

However, Apple appears to have made strides in the meantime, as a 2013 report from IT research firm comScore, published in The Guardian in November of that year, found of 35 million iPhone owners in the US used Apple's maps during September 2013, compared to a total of 58.7 million Google Maps users across the iPhone and Android base.

"Right now, Apple Maps very good for directions, but not so great on getting you information on specific shops and local information, a la Google Maps," Michael Oh, president of Apple retail and care specialist TechSuperpowers, told InformationWeek. "We were just joking about it last week. If you want to look up the information for a business that closed down a few months (or years) ago, Apple Maps is a good place to go. Still, I use Apple Maps for navigation and it excels there."

Oh noted integration with the Apple Watch is "amazing," and it's clear that sticking with Google Maps would never have made sense with products coming out like the Watch.

"The only thing that they should have done was make the move sooner so that they weren’t so far behind," Oh said.

The acquisition suggests the market for mobile mapping technology is becoming increasingly competitive.

Earlier this month, The New York Times reported Uber, best known as a low-cost alternative to taxis, had submitted a bid for as much as $3 billion for Nokia's HERE maps business, which is Google Maps' main competitor.

[Read more about the upcoming iPhone.]

German automakers like Audi, Mercedes, and other market leaders like Facebook are also reportedly part of the bidding war for HERE. The fact the several automakers, along with Uber and other high-tech companies, such as Facebook, are willing to plunk down billions for these firms shows how important mobile is to the future.

This is not the only company Apple has acquired that will help improve Maps. For instance, in 2014, Apple bought Spotsetter, which gathers information from different social media sites and offers recommendations based on that intel to users.

Apple is expected to talk about iOS 9 at the WWDC in a few weeks. the company could also detail new Map features speak about how the acquisitions now fit in with its vision.

Nathan Eddy is a freelance writer for InformationWeek. He has written for Popular Mechanics, Sales & Marketing Management Magazine, FierceMarkets, and CRN, among others. In 2012 he made his first documentary film, The Absent Column. He currently lives in Berlin. View Full Bio
We welcome your comments on this topic on our social media channels, or [contact us directly] with questions about the site.
Comment  |
Email This  |
Print  |
RSS
More Insights
Webcasts
Detecting and Preventing Insider Data Leaks
Nip Ransomware in the FUD: Detecting Attacks Pre-Encryption
More Webcasts
White Papers
Why Add Security to Your Skill Set and How to Do It
Stop Malicious Bots For Good: How Better Bot Management Maximizes Your ROI
More White Papers
Reports
The Infoblox Q4 2020 Cyberthreat Intelligence Report
How Data Breaches Affect the Enterprise (2020)
More Reports

CRM Trends 2021: How the Pandemic Altered Customer Behavior Forever Jessica Davis, Senior Editor, Enterprise Apps,  2/18/2021
White Papers
Why Add Security to Your Skill Set and How to Do It
Supercharge Incident Response with DDI Visibility
Are We Cyber-Resilient? The Key Question Every Organization Must Answer
The Hidden Security Risks of APIs: How to Protect Your Brand, Business, and Data
Balancing Hybrid Storage as Part of a Hybrid Cloud Data Management Strategy