Former iPhone users can deactivate their numbers to fix a bug that sent some texts via iMessage rather than SMS.

Apple quietly released a tool over the weekend that allows people to strip their numbers from its iMessage service. The tool became necessary after a bug caused messages to lose their way when users switched from iPhones to non-iPhones. The issue has been going on for years, and the new tool should make life easier for those who change phones often, or those who switch from an iPhone to a different type of device.

This problem first arose with the arrival of iMessage. Apple's iMessage service allows iOS device users to send messages to one another over WiFi or data networks rather than over traditional cellular-based SMS services. The idea -- a noble one -- was to help defray the cost of messaging plans. When two people use iMessage between iPhones, the conversations are free. Apple made this obvious by coloring the text bubbles blue. When people send messages from an iPhone to a non-iPhone, the conversations must be paid for through a carrier-based messaging plan. Apple colored the text bubbles in non-iMessage conversations green.

At issue is what happened when an iPhone user who registered his or her number with iMessage moved on to another phone. Apple retained the number in its iMessage service. When an iPhone user went to message a former iPhone user, the message would often be sent to that person's iMessage account, rather than be sent as an SMS to his phone. The result? Millions of lost or undelivered messages. You can understand how this might be frustrating. 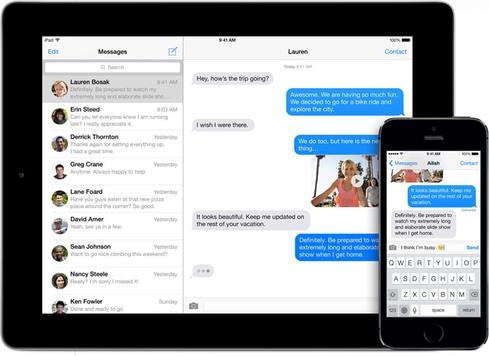 This solution is long overdue and should be a welcome one for any former iPhone user with messages trapped in iMessage Hell.

Eric is a freelance writer for InformationWeek specializing in mobile technologies. View Full Bio
We welcome your comments on this topic on our social media channels, or [contact us directly] with questions about the site.
Comment  |
Email This  |
Print  |
RSS
More Insights
Webcasts
Zero Trust for a Work-From Home World
People Are The Most Important Part of Autonomous SOC
More Webcasts
White Papers
Sunburst: Impact and Timeline
Maturing Your Cloud Security Program
More White Papers
Reports
Are We Cyber-Resilient? The Key Question Every Organization Must Answer
Building the SOC of the Future
More Reports