Apple's new support and features for the iWork suite of apps refine usability.

Apple has released a new version of its iWork suite of apps, bringing new hardware support and some new features. There are updates for Pages, Numbers, and Keynote on iOS 9 and OS X, less than a month after Apple introduced OS X 10.11 El Capitan.

Apple approached the iWork refresh the same way it did with the latest version of OS X -- with an eye for refinement in usability as well as polish aimed at making everything just work better.

Updates to the iWork productivity suite allow Split View to be performed under OS X 10.11, and enable the new 3D touch feature of the iPhone 6s. This allows the iPhone 6s to have "Peep" and "Pop" functionality alongside pressure-sensitive 3D controls when creating and editing documents.

Each of the apps has multiple specific changes for iOS, Mac, and iCloud versions. Yes, iWork for iCloud -- Apple's answer to Microsoft's Office 365 suite -- has finally come out of beta along with the refreshes.

A full and rather large list of the changes broken down by app and the operating system each one works under can be found on the Apple site.

Helping all of its products work together, Apple has implemented Handoff support that lets users switch between iOS and OS X when they are working on iWork documents. 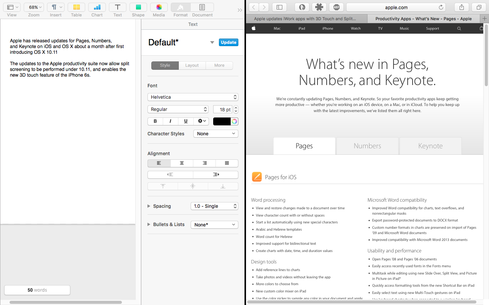 Some other changes are minor, but useful.

A feature in Pages now allows users to view the character count with or without spaces. That's not a major thing, but it can come in handy. However, changes like the full bidirectional support for both Arabic and Hebrew actually widen a core functionality.

Sticking with Pages for a moment (which is one of my most-used Mac apps), improved compatibility with Microsoft Word is a most useful feature. There is now much better compatibility for charts, text overflows, and nonrectangular masks. That compatibility had previously been a problem in some complex documents.

Being able to export password-protected documents to the DOCX format is another useful addition.

Apple also says that it has updated the Pages file format (as well as the Numbers file format) which will make it easier to send documents via services such as Gmail and Dropbox. This format change also allows the viewing of shared Pages documents in an iOS or Android browser.

Numbers -- the spreadsheet application -- has a plethora of small changes as well.

The new Transpose feature makes it simple to rearrange the data in tables.

Custom number formats as well as headers and footers are now preserved when importing Microsoft Excel spreadsheets as well.

Changes specific to the iOS version of Numbers allow landscape orientation to be utilized on the iPad and iPhone, which is something that users have been demanding for a while. It seems a bit silly that this kind of basic functionality has been so long delayed for these devices.

Additionally, Apple has rolled out improvements in the Accessibility features of all the iWork component apps. Apple's VoiceOver has greatly increased its usefulness with new commands for most of the major functions of each app.

As you can see, the real magic happens under the hood of the apps. Apple should be commended for taking this kind of approach instead of creating flashy new features that are poorly implemented.

Larry Loeb has written for many of the last century's major "dead tree" computer magazines, having been, among other things, a consulting editor for BYTE magazine and senior editor for the launch of WebWeek. He has written a book on the Secure Electronic Transaction Internet ... View Full Bio
We welcome your comments on this topic on our social media channels, or [contact us directly] with questions about the site.
Comment  |
Email This  |
Print  |
RSS
More Insights
Webcasts
What We Can Learn from Sports Analytics
How Elite Analyst Teams are Transforming Security with Cyber Reconnaissance
More Webcasts
White Papers
A Technical Deep Dive on Software Exploits
The Essential Guide to Securing Remote Access
More White Papers
Reports
The State of Threat Detection and Response
Are Unprotected Cloud Databases Leaking Your Data?
More Reports