Three apps, downloaded to tens of millions of Android devices from the Google Play store, foisted ads for apps on unsuspecting users.

Google has suspended three applications from the Play Store after being alerted to the presence of malicious adware. A security firm revealed the infected apps to Google and believes they've been installed on many millions of phones and tablets.

The development raises a number of questions about how Google operates the Play Store and whether or not its reactive approach is the right one.

One of the apps, a solitaire game called Durak, targeted English speakers, according to Avast, the security firm that discovered the adware. The other two applications -- an IQ test and a history app -- targeted Russian speakers. Durak hit the Play Store in December and has been downloaded between 5 and 10 million times.

Whoever created the apps used a clever ploy. The creator remained dormant for a period of up to 30 days in a clear attempt to hide.

"After 30 days, I guess not many people would know which app is causing abnormal behavior on their phone, right?" noted Avast's Filip Chytry in a blog post. All three apps behaved normally after they were installed. Perhaps a week or two later, some users reported some strange behavior from their device after a reboot.

At the 30-day mark, however, things got ugly. 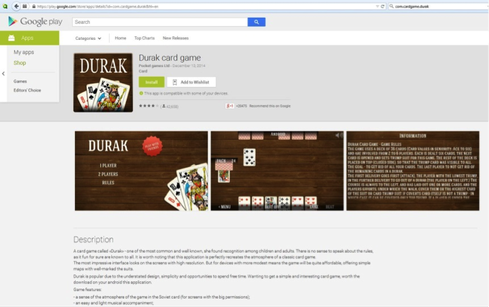 Basically, the adware used system-level notifications to generate advertisements for other apps and services. This is strictly verboten behavior. Google was quick to respond to Avast's alert, suspend the apps, and assure people that they shouldn't worry. Hopefully Google plans to do a lot more, because there's plenty to worry about here:

[Where are the Android 5.0 Lollipop updates? Check out how the smartphone market is responding.]

Assuming those apps were free, you get what you pay for.
Reply  |  Post Message  |  Messages List  |  Start a Board
InformationWeek Is Getting an Upgrade!