Echo microphone and speaker system lets you talk to Amazon's cloud and get answers, news, and music.

Apple has Siri. Google has Voice Search. Microsoft has Cortana. To meet the expectation of platform parity, Amazon introduced a cloud-based voice query system of its own on Thursday.

Amazon Echo currently is being offered by invitation only, to Amazon Prime members for $99 (for a limited time) and to the general public for $199. It is a microphone and speaker system tied to Amazon's cloud that listens for a selected keyword and interprets the words that follow as a command or search query.

Prompted by a "wake word" -- Amazon proposes "Alexa," but it could just as well be something more fun, such as, "OK, Google," "HAL," or, for fans of Alien and Psycho, "Mother" -- Echo can stream news, weather, and information on demand from local radio stations or music services such as iTunes, Pandora, and Spotify. It can play music from the cloud through Amazon Music Library, Prime Music, TuneIn, and iHeartRadio. It can create alarms, timers, and lists. It can answer common questions using Wikipedia. Amazon plans to add more services over time.

It's tempting to think of Echo as Siri incarnated as a plastic cylinder, but it's rather a different beast. Siri and its peers are present sometimes, when your phone is nearby or, in Google's case, when your computer is running Chrome. Echo is present always, so long as it's plugged in and connected to a wireless network. And its visible presence invites interaction in a way that smartphones do not.

Echo is not a mobile device, yet it's designed to be useful as users move around it. Echo is an Internet of Things device that could motivate customers to buy compatible Bluetooth-enabled devices that they can order around by voice command. It is also a social device: Where smartphones tend to be personal devices, Echo attends to everyone in the area. But there's an Echo app, too. 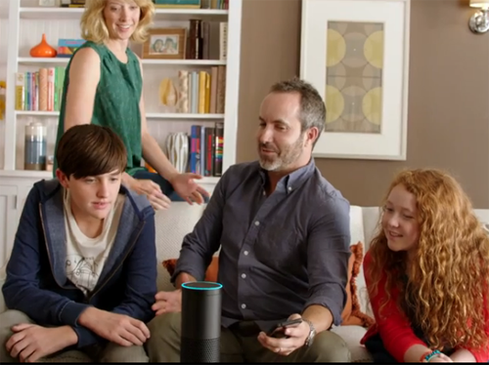 A family peppers its new Echo with questions
in an Amazon promotional video.

What's more, Echo's strength as a speaker makes it better suited to deliver audio services than a smartphone with limited audio output capabilities. And if Echo finds favor as a home audio system, speakers that lack a microphone for bi-directional audio transmission could become quaint. Sonos should worry.

Those who value privacy are already worried. The risk posed by devices that listen is well known, though probably more acute in corporate or government offices than in the homes of boring people who flaunt their activities on social media and still get little attention. At the 2013 Black Hat security conference, Kevin McNamee, director of Alcatel-Lucent's Kindsight Security Labs, demonstrated how to subvert a smartphone to track location, intercept communication, and activate the camera and microphone. And there have been reports of such intrusions outside of conference settings, such as the hacking of a baby monitor.

"This 'Internet of Things' trend coincides unfortunately with the 'dragnet surveillance' trend," Miles Richardson, a computer scientist graduating from Yale at the end of the year, wrote in a Hacker News post. "With every new product launch from a 'cloud company,' I increasingly feel as if I'm reading the tombstone of modern society. The selling point behind these devices is convenience, but at the cost of security. I don't think I need to explain to [Hacker News] why an always-on, Internet-connected voice recording device is something to keep out of your house."

Amazon did not immediately respond to a request to clarify what Echo transmits and what gets stored in Amazon's cloud. If only there were some device that would answer such questions.

It doesn't matter whether your e-commerce D-Day is Black Friday, tax day, or some random Thursday when a post goes viral. Your websites need to be ready. Get the new Battle-Tested Websites issue of InformationWeek Tech Digest today (free registration required).

Thomas Claburn has been writing about business and technology since 1996, for publications such as New Architect, PC Computing, InformationWeek, Salon, Wired, and Ziff Davis Smart Business. Before that, he worked in film and television, having earned a not particularly useful ... View Full Bio
We welcome your comments on this topic on our social media channels, or [contact us directly] with questions about the site.
Comment  |
Email This  |
Print  |
RSS
More Insights
Webcasts
Monitoring the Invisible - Digital Experiences in a Zero Trust World
Leveraging Infrastructure as Code to Streamline Security & Operations
More Webcasts
White Papers
Are Your Managed Services Right for Your Business?
Case Study: What Elite Threat Hunters See That Others Miss
More White Papers
Reports
SANS Institute Survey: The State of Cloud Security
The Infoblox Q1 2021 Cyberthreat Intelligence Report
More Reports
Copyright © 2021 UBM Electronics, A UBM company, All rights reserved. Privacy Policy | Terms of Service