Alphabet, Google's new parent company, exceeded analysts' expectations due in large part to the strength of its mobile search business, according to company executives.

Google's revenue in Q3 2015 grew 13% year-over-year. The company had been expected to report revenue of $18.54 billion, according to Thomson Reuters.

Ruth Porat, CFO of Alphabet and Google, said in a statement that Google's Q3 results underscore the strength of Google's business, particularly in mobile search. She noted that six Google products now have more than one billion users globally. These include: Search, Android, Chrome, Maps, YouTube, and Google Play.

Porat said that for its Q4 report, Alphabet will disclose Google earnings as well as "other bets," companies like Calico and Nest that were previously operated as divisions of Google. She also noted that the strong dollar had a $1.6 billion impact on Google's results, or $1.3 billion when the company's currency hedging program is taken into account. 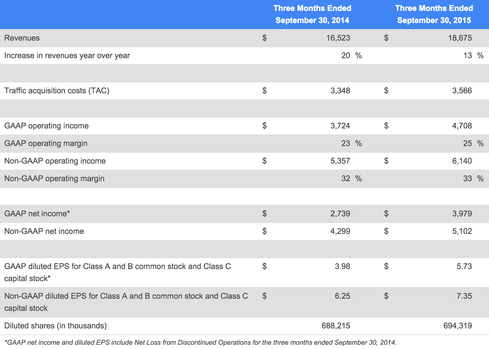 But questions raised by financial analysts on the company's conference call suggest ongoing doubts about Google's ability to monetize that traffic. Investors hope that Google will be able to match its desktop search revenue by selling ads on mobile devices, but history may not repeat itself.

In a recent blog post, The Guardian's Charles Arthur articulated those concerns, noting that the average number of Google searches per smartphone per day is less than one. He characterizes mobile search as "a real problem for Google."

To hear Porat or Pichai tell it, mobile search is one of the many opportunities for Google.

Pichai also expressed optimism about cloud computing. "On the cloud side, it's an exceptional opportunity," he said. "Every business in the world is going to run on cloud eventually."

Pichai said Google's enterprise business, Google for Work, now has over a million paying customers. And he emphasized Google's commitment to machine learning, which informs the company's translation capabilities among many other applications.

"Our investments in machine learning and AI are a priority for us," said Pichai.

The company also announced that its board had authorized the company to buy back up to $5,099,019,513.59 in shares starting this year. The very specific dollar amount corresponds to the square root of 26 -- the same number of letters in the alphabet.

Thomas Claburn has been writing about business and technology since 1996, for publications such as New Architect, PC Computing, InformationWeek, Salon, Wired, and Ziff Davis Smart Business. Before that, he worked in film and television, having earned a not particularly useful ... View Full Bio
We welcome your comments on this topic on our social media channels, or [contact us directly] with questions about the site.
Comment  |
Email This  |
Print  |
RSS
More Insights
Webcasts
What We Can Learn from Sports Analytics
How Elite Analyst Teams are Transforming Security with Cyber Reconnaissance
More Webcasts
White Papers
A Practical Guide to SASE Migration
The Insecure State of Microsoft Teams Security
More White Papers
Reports
How Data Breaches Affect the Enterprise (2020)
2020 State of Cybersecurity Operations and Incident Response
More Reports