InformationWeek picks eight different iPhone apps to help you take pictures and create stellar holiday memories. The best part is that most are free. 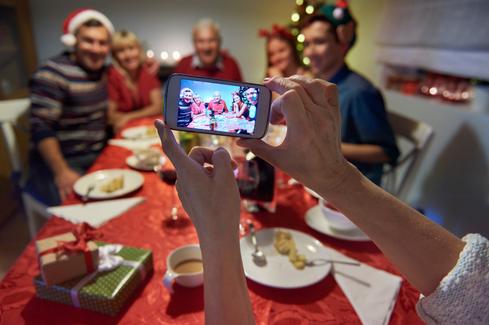 For most of us, the holidays equal memories. With every last relative carting around a plus-sized smartphone, it's important that your visual season's greetings are up to snuff.

More than 80% of consumers expressed frustration with smartphones at the holiday dinner table, but 31% of consumers say it's acceptable to take and share photos only, according to a recent survey by Sequence. What this seems to mean is that as long as you're not eating, snapping shots wherever you happen to be during the holiday is going to be ok with friends and relatives.

With such high-tech capabilities placed in our gloved hands, however, it can be a little overwhelming to see the number of applications dedicated to sprucing up and sending your photos -- not to mention that you may be dealing with older generations who aren't (gasp!) on Instagram or other popular social media platforms.

In addition, Google Photos recently rolled out a feature called shared albums -- originally announced back at Google's event in September -- which lets you share photos in an album with anyone you want.

With the holiday rush entering its final, madcap phase, it's easy to overlook some of the things, like great photo editing and sharing apps, that can help make this season's memories even more special. We've put together a list of great applications that will help you do just that.

From social media sites, to photo editing suites, and ways to send your photos around the world for very affordable rates, we've collected some of the best apps the Apple Store has to offer.

(All images courtesy of the Apple App Store)

I don't mind to pay a reasonable price for keeping the best memories - the memory is very valuable and not replacable.
Reply  |  Post Message  |  Messages List  |  Start a Board

@Yalanand: I don't remember which phone company did it, I think it was HTC that tried to capture the ambiance of the shot you were taking with its camera. It captured 2 seconds of sound. A
Reply  |  Post Message  |  Messages List  |  Start a Board

@Yalanand: Really good idea on the sunset camera app. But I think beautified sunsets are interesting but upto a certain point of time. Slowly the app would fade away from the marketplace.
Reply  |  Post Message  |  Messages List  |  Start a Board

@Nasimson: I really loved the Storyline feature on Windows Phone. While the same thing can exist for Android or iPhones as well, it isn't that good because I think features like Storyline( where you can assign a voice note or a text note to a photo describing the event of that photo) should really have a nice and powerful synch feature with any digital gallery/computer.
Reply  |  Post Message  |  Messages List  |  Start a Board

@Nasimson: Indeed. I've heard a lot of camera apps can make up for this if you tweak their settings. The only downside of that is that you have to fiddle too much to get the right exposure. Why can't there be certain preset filters for sunsets I wonder. Maybe someone will develop it in their camera app.
Reply  |  Post Message  |  Messages List  |  Start a Board

Nice collection of apps Nathan. It's worth mentioning here that Google Photos has unlimited storage and that's a killer. All my phones and tabs have this app. And all photos are backed up automatically. And I can retrieve these from any device.
Reply  |  Post Message  |  Messages List  |  Start a Board

@yalaland: You've hit on an important unmet need. This is a niche. But rather than a separate app, this should be a feature within existing camera app.
Reply  |  Post Message  |  Messages List  |  Start a Board

The postcard app is a really good one. I need to check it out. What makes me uncomfortable is the fact that people of the digital age, especially the kids, are staying inside the house and not going out, liking pictures on Instagram and feeling happy. I really think the more we let technology control us the less happy we become.
Reply  |  Post Message  |  Messages List  |  Start a Board


A good collection indeed. I thing memories are more important than pricing. If anything can get your memories safely and as originally as possible than I think small price will not do any harm. I personnaly will go for Pro Camera 8 and hope that I can save these wonderful memories for as long as possible.