50%
Tweet
Microsoft is testing a one-handed software keyboard for the iPhone that fans out from one corner -- a move that may strike a bit of deja vu for those who saw the company's last angled one-handed keyboard in 2012.

Microsoft has gone back to the drawing board for its angled, one-handed software keyboard and may be hitting a winner this time around. The software giant is reportedly testing its Microsoft Word Flow keyboard for iOS, which allows users to type away with just one hand on an arched keyboard, according to a report in The Verge.

Under the current design that Microsoft is internally testing, users would have the ability to cradle the iPhone in one hand and use their thumb on the arched keyboard that fans out from the lower corner of the phone, according to The Verge, which cites "Sources familiar with Microsoft's plans." With one tap on the keyboard, users can toggle between the one-handed mode and the more traditional keyboard display. 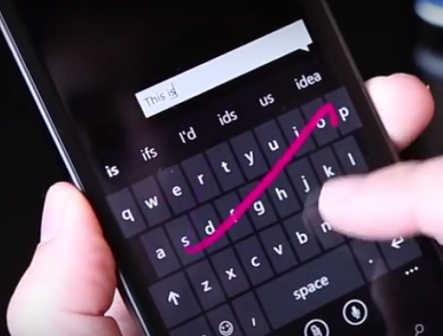 Back in 2012, Microsoft noodled around with a similar concept, in which the keyboard was also angled and designed for users to type with their thumb while holding the device with one hand, according to a post by WMPowerUser. The older design, however, had several letters clustered on a single key, requiring more thought when typing. Under the Windows Phone keyboard for iOS, each letter has its own key.

It remains unclear why this angled, one-handed, thumb-typing feature has taken this long to re-emerge, but then again, Microsoft's Windows Phone efforts have undergone a lot of changes, such as the company's Nokia acquisition that was designed to boost its phone efforts, but fell short.

With Microsoft's latest reincarnation of the arched keyboard, Microsoft Word Flow for iOS will also offer many of the same features as its Windows 10 Mobile phone does, such as the ability to swipe letters rather than type, word suggestions that pop up to ease typing, and emojis, notes The Verge, pointing to a possible Word Flow release on iOS in the near future and an Android version sometime this year.

As for Windows 10 Mobile users, it's unclear whether they will receive the benefits of this arched one-hand design. Their mobile keyboard has the ability to squash the keyboard to the far right or left of the screen. What may be a likely scenario is that Microsoft will let the market decide which is the preferred choice and, in future updates, morph the winner onto those devices that don't have the winning keyboard.

Dawn Kawamoto is an Associate Editor for Dark Reading, where she covers cybersecurity news and trends. She is an award-winning journalist who has written and edited technology, management, leadership, career, finance, and innovation stories for such publications as CNET's ... View Full Bio
We welcome your comments on this topic on our social media channels, or [contact us directly] with questions about the site.
Comment  |
Email This  |
Print  |
RSS
More Insights
Webcasts
Using Artificial Intelligence, Deep Learning and Machine Learning for Cyber Defense
Profile of an Online Attack
More Webcasts
White Papers
Winning at Cyberrisk Management
Human Layer Security for Dummies
More White Papers
Reports
The Future of Multi-Cloud Networking 2020
Remote Network Management: The Enterprise at Home
More Reports

I disagree. Microsoft has been very slow to develop apps for Android. They waited so long to bring Office to mobile (Android and iOS) that they mostly missed the opportunity. I don't think a keyboard replacement is something they would willingly develop for Android first. The company behind Swype is far smaller than the all mighty Microsoft.
Reply  |  Post Message  |  Messages List  |  Start a Board

@nomii: I'd expect Microsoft's app to be buggy, slow and bloated in size. I've not tried this app, but I've come to expect this from all things Microsoft.
Reply  |  Post Message  |  Messages List  |  Start a Board


@Nasimson I agree with you there. TouchPal is really very handy to use. But I am sure that MS must be having something better than what the market is already having. If they cannot do that then its no use to develop something not user friendly under such a big banner. What do you say?

@Michelle: I've tried Swype, but better than that I've found TouchPal. It's faster to load, and remembers what I type and also offer suggestions. The flow typing is so better than touch typing.
Reply  |  Post Message  |  Messages List  |  Start a Board

Will the Microsoft keyboard be more stable?
I bet it is. Otherwise Android would have been the first to get it. :)
Reply  |  Post Message  |  Messages List  |  Start a Board

This is an interesting development... Swype is an amazing keyboard and works well on Android. They already have aversion for iOS (though has some limitations and bugs). Will the Microsoft keyboard be more stable?
Reply  |  Post Message  |  Messages List  |  Start a Board
Editors' Choice
Hot Topics