50%
Tweet
Microsoft's latest hardware project could involve a modular computer with stackable components, as indicated by a new patent.

10 Top CIO Priorities: The Reality Vs. The Ideal
(Click image for larger view and slideshow.)

It seems Microsoft is brainstorming a modular PC. The company recently published a patent application for a "modular computing device," which would consist of separate pieces that could be swapped out for upgrades and customization. It initially applied for the patent in July 2015.

The range and functionality of computer hardware is continuously increasing, with faster processors and greater memories becoming available. Normally, consumers have to purchase a new PC to access these features.

A modular design would make PC advancements more accessible to everyday consumers, who would be able to upgrade their devices for lower cost. 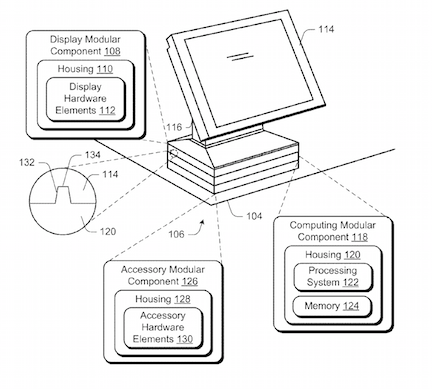 The computer would be made of several hardware components stacked together to create a functional PC. If one piece stopped working or needed an upgrade, it would be simple to purchase and install a specific replacement part, rather than buy a new computer.

Microsoft's modular design would include a display connected to the computer via a hinge. Some of the hardware parts, including a graphics card, removable battery, and processor, would be stacked in pieces attached magnetically or by mechanical latches.

The patent application explains how accessory modules could enable gesture recognition for user input. Others could serve as output devices for speakers or holographic projections, indicating the PC's potential compatibility with HoloLens.

While it's already possible for PC owners to replace components of their modern computers, it's difficult to successfully swap hardware without extensive knowledge of how PCs work.

Microsoft indicates this device would be easy for everyday consumers to use. It describes how "the computing device may be altered and changed readily by a user in an intuitive manner without requiring that person have detailed knowledge of the hardware."

It seems this project would fall under the management of the Surface team. Tim Escolin, one of the patent's authors, is a senior industrial designer for the Surface devices and accessories division, as noted by VentureBeat in the first report on Microsoft's patent update.

Microsoft's PC design is a concept reminiscent of Google's Project Ara, a modular smartphone platform designed to let users create a phone that suits their preferences. Google delayed the launch of Project Ara in August 2015 with the promise it will debut later this year.

Other companies have also explored the potential for modular computers. In Sept. 2015, Acer debuted the modular Revo Build Mini PC, which allows consumers to customize their device with "blocks."

A patent application is a far cry from a finished product, and this news doesn't necessarily guarantee Microsoft will debut a modular computer in the coming years. However, the launch of Surface Pro 4 and Surface Book are clear indicators the company is committed to competing in the hardware space.

What are your thoughts on the concept of a modular PC? Is this something you would be willing to try? Where are the potential problems for an idea like this?

Kelly Sheridan is the Staff Editor at Dark Reading, where she focuses on cybersecurity news and analysis. She is a business technology journalist who previously reported for InformationWeek, where she covered Microsoft, and Insurance & Technology, where she covered financial ... View Full Bio
We welcome your comments on this topic on our social media channels, or [contact us directly] with questions about the site.
Comment  |
Email This  |
Print  |
RSS
More Insights
Webcasts
Keeping the Business Running with Remote Network Management
5 Ways to Jumpstart AI
More Webcasts
White Papers
2019 Software Exploits, a Technical Deep Dive into Vulnerabilities
2020 Trends to Watch: Cybersecurity
More White Papers
Reports
The New Face of IT Automation
State of Cybersecurity Incident Response
More Reports

@jries921, vnewman2
Good topic... I am curious too!
about your " patent application will just be rejected on the basis of existence of prior art" comment...
Lets test and see if this is true... existing Datacentroid patent (#US 8195625)
Reply  |  Post Message  |  Messages List  |  Start a Board

Maybe Microsoft is slipping... didn't they do a patent search? the Datacentroid patent (US 8195625)

I no longer have confidence that such will be the case,  If patent applications were properly researched and the law was properly applied, junk patents would disappear overnight, but as far as I can tell, patent examiners no longer have the time or resources to do their jobs right, there is no penalty for gaming the system, and current judicial precedent is severely out of harmony with the spirit of the law.
Reply  |  Post Message  |  Messages List  |  Start a Board

@jries921, if that is the case, then the patent application will just be rejected on the basis of existence of prior art (evidence that your invention is already known).  The firm I used to work for was one of MSFT's preferred IP firms and they would submit applications like throwing noodles at the wall, hoping some would stick.  It often depends on the examiner it gets assigned to at the USPTO.
Reply  |  Post Message  |  Messages List  |  Start a Board

Unless there is something here that isn't being reported, these are concepts that are half a century old at least and weren't originated by MS or any of its current employees.  In any case, modular personal computers have been sold continuously since the late 1970s.  MS did not invent them, though it has written a lot of software for them,

Patents should only be granted for real inventions (that are actually new) and this doesn't seem to meet that standard.
Reply  |  Post Message  |  Messages List  |  Start a Board

Why are they bothering? This would have been revolutionary in 1990, a bit less so now that tablets and laptops have become small, fast, and cheap.
Reply  |  Post Message  |  Messages List  |  Start a Board

This harks back to the old "mini-computers" of the 1980's. Unlike mass-marketed PC's, which had to be cheap to manufacture, the "mini's" had what were called backplanes, into which technicians inserted boards to accomplish the different functions of the machine as a whole. I remember being horrified when I first saw the guts of an IBM PC, where the peripheral boards were mounted onto the motherboard. Horrors!- I thought. This unstable situation will never last, the motherboards will crack after a few day's use.

Well, the idea has lasted thirty years so far. I wonder if this new possible modality will stave off early obsolescence, if adapted?
Reply  |  Post Message  |  Messages List  |  Start a Board
Editors' Choice
Hot Topics

More Informa Tech Live Events
Now That Ransomware Has Gone Nuclear, How Can You Avoid Becoming the Next Victim?The Changing Face of Threat IntelligenceWhy Performance Testing is More Critical Today