Connect up to three iDevices simultaneously and quickly switch between them with just a keystroke with Logitech's latest, Mac-worthy, wireless keyboard.

Earlier this week, I received a Logitech Bluetooth Easy-Switch Keyboard to review. Does it resolve my wireless keyboard issues? Is it a good edition to your computing rig? Let's take a quick look and see.

I began my Mac journey in 2006 when I bought my first 15-inch MacBook Pro. Truth be told, I bought it to be a Windows machine. Even then, the high quality, value-retaining hardware was difficult to resist; and Apple's Boot Camp made it easy to run Windows on my Mac. Today, I'm a full Mac convert, and prefer using OS X 10.8 Mountain Lion on my early 2011 15-inch MacBook Pro. 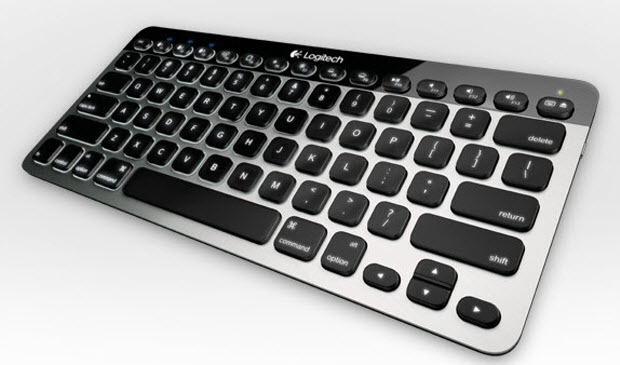 My desktop setup includes a Hengedock vertical dock, Thunderbolt display, Apple full-sized USB keyboard and Apple Magic Mouse. I swapped out my hard drive for a 256GB SSD and further tricked it out by pulling out the SuperDrive and putting in OWC's Data Doubler, a 2.5-inch drive mounting bracket and 480GB SSD, for a total of 736GB of lightning quick, solid state storage. I have a USB Blu-ray DVD drive sitting on my desk for those times I need access to optical storage. It's a nice setup and one that works well for me.

The one thing that's really missing from this setup is a wireless keyboard. I have an Apple Wireless Keyboard, but there were some things about it just didn't work for me – size, no backlight and double AA batteries. Those shortcomings kinda killed it for me, and so it sits in its box.

The Logitech Bluetooth Easy-Switch Keyboard is designed for use with Apple products, and as such is covered in the same type of material as your Mac Laptop or Mini – with Aluminum. This finish makes the package look like it belongs – like the Bluetooth Easy-Switch Keyboard was meant to be a part of your computing rig. It's similar in shape and size to the Apple Wireless Keyboard, but is $30 USD more expensive. The keys are spaced at about the same distance and are approximately the same size. As such, touch-typing on it is easy and comfortable. Key travel is a bit firmer than you might think, compared to both the Apple Wireless Keyboard and the full-sized, USB keyboard.

The biggest issue I had with the keyboard's size and feel was that it laid flat on my desk. Both the Apple Wireless and full-sized USB Keyboard are raised at approximately 10-12 degrees, to facilitate a better typing angle. The Logitech keyboard lies flat, requiring you to hover your hands over it in order to type. With other keyboards, you can rest the heal of your palm against the typing surface or table you have it on. This isn't a deal breaker, but will require some getting used to in terms of typing style and comfort.

The keyboard uses Bluetooth 3.0 to communicate with your Mac and two other iDevices and requires Snow Leopard 10.6.8 or later on the desktop and iOS 4.0 or later on your iDevice. While the device works and functions as it's intended to without Logitech's Preferences Pane, it's a good idea to install it. Without it, you're not going to be able to control how the keyboard's function keys work – either as standard function keys, or as special keys. While Apple's standard keyboard preference pane does this for nearly all other keyboards, it doesn't work with Logitech's, and this was perhaps the most frustrating thing about the device for me. I had to install the preference pane just for this purpose.

As I mentioned, the keyboard works just fine without it. You really don't miss anything else without it, and the on-screen visuals that it also supplies is a nice to have. However, none of it is needed in order to have the keyboard function.

When I got the keyboard, it needed charging. It uses a standard microUSB cable for that purpose, and you can either use the included cable or one for any other device you might have lying around. The keyboard was usable during charging, and charged in a couple of hours. So far, it's lasted just over a week on the charge it took. In fact, according to the Logitech Preference Pane, the battery level for the keyboard doesn't look to have moved. A charge should last you weeks of casual to moderate use when left on in between uses.

The big selling point of the keyboard is its ability to swap between your Mac and your iDevice with little to no issues. I'm happy to say this worked flawlessly for me. Pairing the keyboard to both my Mac and iPad required nothing more than turning it on, choosing one of three different communication channels and then allowing the keyboard to find its host. I was typing and switching between both – on the fly – with nothing more than a tap of F1 or F2 (or F3...the three communication channels I mentioned). The keyboard didn't miss a beat after the host device acknowledged the connection. It's really kinda cool.

At $99.99 USD, the Logitech Bluetooth Easy-Switch Keyboard is a bit on the pricey side for me. While impressive looking and working well, I was only slightly impressed. The biggest draw to the keyboard is its ability to switch between any Mac or iDevice with a touch of a function key. Unless you're going to carry it with you when you travel – and some might – this ability isn't as big a deal as you might think. I don't see how you'd swap between your Mac and your iPad or iPhone in the same computing session -- not when you have a much better screen on your Mac or desktop monitor and can easily sync content from it to your Mac.

The ability to store more than one wireless profile on it is nice, but I've been able to use my Apple Wireless keyboard with both my Mac and my iPad. I wasn't able to switch between them as quickly and easily, but again, I likely won't use both in the same computing session so it doesn't matter.

Is the Bluetooth Easy-Switch Keyboard from Logitech for you? That's a matter of personal preference. Right now, I'm on the fence. It's not bad at all, but I've got other options that are just as good, and I think I'm happy with what I have right now.