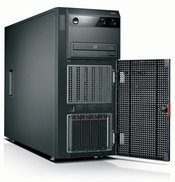 The entry-level TS130 tower replaces the previous TS200v model. Its $499 starting price tag is intended to attract smaller businesses taking the first-server plunge, particularly those firms that have previously tried repurposing a desktop as a server. Two hard disk drives offer up to 4 TB of SATA capacity.

It also features Intel's AMT 7.0 remote management functionality, likewise aimed at SMBs with limited IT resources. Andrew Jeffries, Lenovo's product marketing manager for ThinkServer, stressed remote management as the must-have feature for smaller firms, particularly those that outsource IT to a managed service provider (MSP) or other third party.

"The TS130 now allows the MSP to bring in the server as part of the manageability solution," Jeffries said in an interview. "That allows the business partner to really take the offerings and really ramp those up a bit."

The TS430, on the other hand, is an all-new tower unit geared for growing businesses that want to hedge between budget consciousness and the possibility of rapid expansion. The server's eight hot-swap drives expand to 16-TB SATA or 4.8-TB SAS storage. Like the TS130, it also includes remote management features, though its are based on IP-KVM. The TS430 starts at $699.

Jeffries said growth-minded SMBs are asking not just for expandability but for increasing performance; he points to hardware-based SAS RAID technology as an example. "I've been able to grow my company from a dozen to 50 to 100 to 400 employees," Jeffries said. "I need a very sophisticated server now." Both new ThinkServer units run on Intel Xeon processors and support either Windows Server 2008 R2 or Windows Small Business Server 2011. Both towers are rack-able.

The value play for the TS130 could be particularly timely. Recent IDC research on SMB technology spending showed that server adoption, though static among midsize companies, is growing among small businesses. That has been driven in part by an increasing number of inexpensive servers on the market.

"So many small businesses over the years might have been saying: 'You know what, I don't have the money,'" Jeffries said, noting that those companies would often retrofit a desktop to act like a server--a potentially risky move. "Now, you're getting true server-grade features for around the same price as a desktop."

In fact, the TS130 actually beats some desktops on price: Lenovo also launched the ThinkCentre M71e desktop on Tuesday that starts at $529. Though aimed more at larger enterprises, it's an entry-level PC that may likewise find its way into smaller office environments. Lenovo typically defines SMB as up to 500 employees.

It doesn't pay for small and midsize businesses to protect against security threats faced by only the largest companies. Here's how to focus your efforts on the right threats. Download our all-digital supplement. Download it now.

We welcome your comments on this topic on our social media channels, or [contact us directly] with questions about the site.
Comment  |
Email This  |
Print  |
RSS
More Insights
Webcasts
Protecting Your Enterprise's Intellectual Property
Strategies for Success with Digital Transformation
More Webcasts
White Papers
The 2020 Duo Security Trusted Access Report
From MFA to Zero Trust
More White Papers
Reports
The State of Threat Detection and Response
How IT Security Organizations are Attacking the Cybersecurity Problem
More Reports