The computer maker has refreshed its line of laptop PCs for mobile pros with ultra-portable notebooks and a line of energy efficient machines. 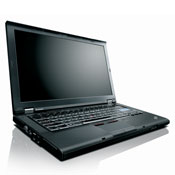 Lenovo on Monday lightened its line of ThinkPad business laptops with the unveiling of an 11.6- and a 13-inch model. In addition, the computer maker refreshed its mainstream ThinkPads with Intel's latest mobile processors.

The 11.6-inch ThinkPad X100e is an "ultra-portable" equipped with the choice of Advanced Micro Devices' Athlon Neo single or dual-core processors and AMD's Turion dual-core chips. The system includes a full-size keyboard, ships with Microsoft Windows 7, and is available in either red or black. The laptop comes with 802.11n Wi-Fi; Bluetooth and 3G wireless support are optional.

The X100e is scheduled to be available Tuesday for a starting price of $449.

The 13-inch model is one of a new line of laptops called the ThinkPad Edge, which also include 14- and 15-inch versions. The line will be available with AMD Turion and Athlon Neo dual-core chips, as well as Intel's Core 2 Duo ultra-low voltage and standard dual core processors.

The Edge systems meet Energy Star 5.0 requirements for energy efficiency and have eight hours of more of battery life. The smallest Edge will be available starting Jan. 5 at a starting price of $549. The larger models are scheduled for release in the second quarter.

Lenovo's latest addition to the mainstream ThinkPad T series include the T410s, T410 and T510 laptops. In addition, Lenovo unveiled the ThinkPad W510 mobile workstation. The laptops will be available with Intel's new 32-nanometer mobile processors, codenamed Arrandale. The chips include the Core i3, Core i5 and Core i7, which is the highest end processor for workstations and gaming machines.

The new Lenovo workstation will be available with a quad-core Core i7, but the company did not say which new Core chips would be offered with each of the new T series line.

The W510 can support up to 16 GB of 1333 MHz DDR3 system memory and includes Nvidia's 1 GB graphics processor. The system also comes with USB 3.0 ports, which are much faster than the USB 2.0 standard.

The T410s is the thinnest and lightest of the new T line. The T410 and T510 are more mainstream systems and, along with the W510, are available with a nine-cell battery that can deliver up to 22 hours of battery life, according to Lenovo.

Lenovo is one of many major computer makers set to show off new laptops sporting Intel's latest processors at CES. The chips, based on Intel's latest 32-nm technology, codenamed Westmere, deliver much faster performance than the previous generation of processors.