iFixit's team has taken apart the iPad Pro to find out what makes it tick. iFixit says there were some surprises hiding under the device's massive display.

Every significant new piece of electronics has to encounter a rite of passage as it reaches the market: the iFixit teardown. When torn asunder, the iPad Pro reveals all sorts of changes to Apple's thinking in assembling the gigantic slate.

The screen is nearly always the first component iFixit removes. In this case, the display is held in place with prodigious amounts of glue. iFixit heated the glue for some time before using a suction cup and several levers to gently lift and remove the screen.

The iPad Pro's screen is somewhat larger than that of the Microsoft Surface Pro 4, at 12.9 inches versus 12.3 inches, respectively. Despite the larger screen, the iPad Pro is thinner (6.9mm versus 8.45mm) and lighter (1.57lbs. versus 1.73lbs.) than the Surface Pro 4.

After lifting the screen, iFixit encountered the first oddity: The logic board is connected to the center of the display, rather than to the edge. This forced iFixit to prop up the screen in order to disconnect the logic board cables. 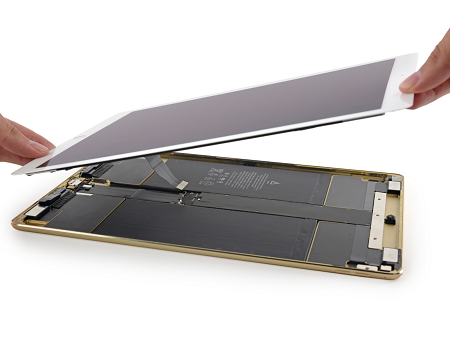 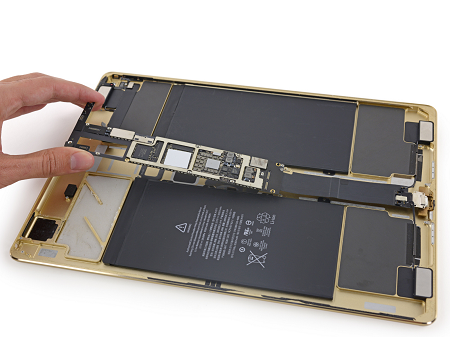 The battery halves are massive, filling a significant portion of the interior cavity. iFixit says the overall battery capacity could have been up to 50% bigger had Apple not concerned itself with the stereo speakers.

The iPad Pro is the first iPad to have more than a single speaker. Apple gave the tablet four speakers, one in each corner of the top and bottom edges. The speakers and their enclosures occupy about half as much interior space as the battery. The speakers have individual drivers and resonance chambers for creating sound. Interestingly, the speakers adjust output as the tablet is moved around: The top two speakers are always pushing high frequencies, while the lower two speakers always transmit low frequencies.

Clearly, Apple could have used some of the space given to the speakers for additional battery capacity. However, more battery would have increased the weight of the tablet significantly. Many early reviews pointed out that the iPad Pro is more difficult to hold and use than the smaller iPad Air and iPad Mini, due to its size and weight. The good news? The batteries are not soldered to the chassis and have pull-tabs to aid in their removal.

iFixit is relatively certain the FaceTime and iSight cameras are recycled from the iPad Air 2. They capture 8-megapixel and 1.2-megapixel images, respectively. 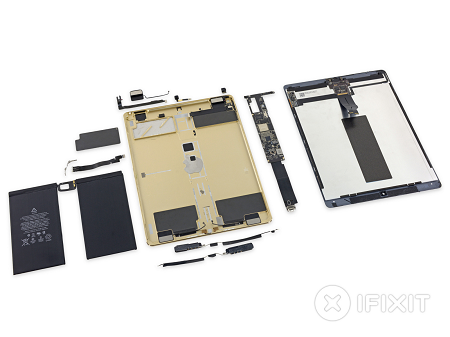 The iPad Pro earns a repairability rating of 3 out of 10, meaning it is very difficult to fix at home. iFixit says the Smart Connector port is practically impossible to replace, and the LCD and front-panel glass are fused together -- increasing the likelihood of damage when opening the iPad Pro. Moreover, Apple used an insane amount of adhesive to hold everything together, which ups the difficulty level measurably.

Eric is a freelance writer for InformationWeek specializing in mobile technologies. View Full Bio
We welcome your comments on this topic on our social media channels, or [contact us directly] with questions about the site.
Comment  |
Email This  |
Print  |
RSS
More Insights
Webcasts
Cybersecurity's Next Wave - What Every Enterprise Should Know
Strategies for Success with Digital Transformation
More Webcasts
White Papers
A Technical Deep Dive on Software Exploits
Centralized Security Policy Management Across Hybrid Cloud Environments Should be an Obvious Strategy
More White Papers
Reports
The State of Cloud Computing - Fall 2020
The Drive for Shift-Left Performance Testing
More Reports