HP introduced its newest premium laptop, the 13.3-inch Spectre, calling it the thinnest laptop in the world. It debuted alongside exclusive designs by Tord Boontje and Jess Hannah, as well as updated Envy models. Here's an up-close look at the new offerings. 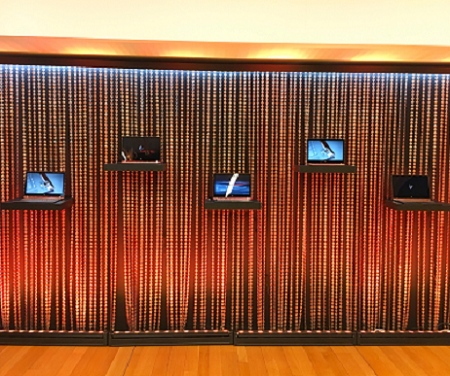 Hewlett-Packard used the occasion of The New York Times Luxury Conference in Versailles, France, April 5, to introduce a number of new devices. These included limited-edition laptops made in collaboration with designers Tord Boontje and Jess Hannah, and -- for the CEO who likes just a bit of bling -- the Spectre 13.3, now the world's thinnest laptop, according to HP. (A spokesperson offered: "Believe me, we made sure.")

The Spectre x360, which was met with a number of positive reviews, offered HP a few lessons, said Michael L. Nash, HP vice president of customer experience and portfolio strategy.

"We noticed there was a customer who was very interested in having a superthin, superlight device. And frankly, it's someone who wants more of a precious piece of jewelry, almost," he explained.

The Spectre 13.3 attempts to speak to that desire. It has a CNC aluminum top, a carbon fiber bottom, and is, in HP's parlance, "Ash Silver"  with copper finishes. It's reflective and bright -- and looks, indeed, to be made from jewelry.

Two Envy designs, with the option of a 15.6- or 17.3-inch display (on the diagonal), feature a new hinge design that's invisible on the front, and that, when opened, tucks itself down and beneath the bottom of the laptop, nudging the machine up to an angle that HP says makes for more ergonomic typing and creates a better viewing experience.

HP also slimmed down the Envy physique by bonding the display to the glass (which has the option of touch capabilities) instead of leaving an air gap, as it has in the past.

Additionally, it introduced a 15.6-inch Envy x360 -- which, as the name suggests, folds back 360 degrees on geared hinges. It weighs 4.5 pounds and measures 1.88 cm (18.8 mm). HP says its battery lasts up to 11 hours. Like the other new Envy machines, it offers the latest sixth-generation Intel Core i processors up to an i7 and features audio by Bang & Olufsen, also with HP's Audio Boost technology.

In partnership with industrial product designer Tord Boontje, HP will also be offering for auction -- with proceeds going to the Nelson Mandela Foundation -- a Boontje-designed version of the new Spectre.

Its lid and keyboard are covered in 18-carat gold and then a midnight-blue coating; 40 hours of CNC milling work then etches an intricate Boontje design into blue, revealing the gold. If that weren't enough, approximately 800 Swarovski crystals are then hand-glued to the laptop.

If something simpler, but no less glamorous, is more your style, there will also be a limited-edition Spectre designed by Jess Hannah, a Los Angeles jewelry designer who gained Instagram fame (and then regular old fame) for her fine, clean, clever aesthetic.

Hannah went for a gold-and-pavé-diamonds approach, and treated the keyboard to her signature Allegra typeface -- perhaps even more striking than the HP logo in raised diamonds. While a diamond-dotted power button isn't for everyone, many may be wishing that the Allegra typeface is here to stay.

The Spectre, which runs Microsoft's Windows 10 operating system, will be available for preorder April 25 at HP.com and BBY.com, starting at $1,169. On May 29, it will arrive in Best Buy stores, starting at $1,250. A limited number of the Boontje and Hannah versions will be auctioned during the Cannes Film Festival in May.

Take a closer look and let us know what you think of HP's latest offerings in the comments section below.

(All images taken at an HP press event in New York City by Michelle Maisto/InformationWeek.)

Michelle Maisto is a writer, a reader, a plotter, a cook, and a thinker whose career has revolved around food and technology. She has been, among other things, the editor-in-chief of Mobile Enterprise Magazine, a reporter on consumer mobile products and wireless networks for ... View Full Bio
We welcome your comments on this topic on our social media channels, or [contact us directly] with questions about the site.