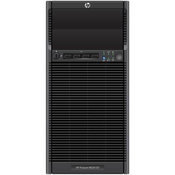 The ProLiant ML110 G7 server is intended for smaller firms with limited IT resources and everyday office needs, while the ProLiant DL120 G7 is a step up for growing SMBs with heavier application requirements. The DL120 features two PCI Express slots for expandability. Both units run on Intel Xeon processors.

On the storage front, HP has added VMware vStorage APIs for Array Integration (VAAI) support to the P2000 G3 Modular Smart Array (MSA); previously VAAI integration was only available with HP's enterprise storage products. According to Britt Terry, worldwide marketing manager for P2000, the addition enables administrators to clone virtual machines 64% faster. HP also touts a 73% improvement in the time to deploy VMs by shifting the initialization tasks to the MSA controller instead of the storage area network and VMware server.

"All indicators we have, virtualization is a big trend," Terry said in an interview. "There's so much advantage in being able to manage machines as a pool with golden copies, rather than as a whole bunch of individual machines."

The P2000 has also added a 3-TB SAS drive, bringing the maximum configurable capacity to 288 TB. Terry said that the P2000 has found particular traction with SMBs distributed across multiple remote or branch offices.

Jim Ganthier, VP of marketing for industry-standard servers and software, called the SMB market "very important to HP" in an interview. "It's growing very, very quickly compared to other markets," Ganthier said.

The HP rollout continues the wave of Goliath vendors launching server and storage products for David-size businesses. Last week, Lenovo added a $499 first-server unit to its ThinkServer line. Earlier in the year, Dell produced two entry-level servers and has likewise made a big SMB storage push, largely through acquisitions.

Recent IDC research on 2011 IT spending by SMBs showed a trend among small businesses, in particular, of stepping up to a first server earlier in the company lifecycle than in years past. The adoption point traditionally came around the 50-employee mark, according to IDC analyst Justin Jaffe, but lately it's occurring with as few as 10 people on staff. That's in part due to the increasing number of budget-conscious servers available. Pricing for the HP ProLiant ML110 G7 starts at $710, while the DL120 G7 unit begins at $793.

We welcome your comments on this topic on our social media channels, or [contact us directly] with questions about the site.
Comment  |
Email This  |
Print  |
RSS
More Insights
Webcasts
What We Can Learn from Sports Analytics
Protecting Your Enterprise's Intellectual Property
More Webcasts
White Papers
The State of Threat Detection and Response
Frost Radar: Global Threat Intelligence Platform Market
More White Papers
Reports
Are Unprotected Cloud Databases Leaking Your Data?
The ROI Of SD-WAN: Not Just A Numbers Game
More Reports