Apple's iPad is less expensive than the $799 Windows 7 tablet with an 8.9-inch display, 2 cameras and Intel Atom processor. 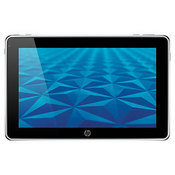 HP Slate 500
Hewlett-Packard on Friday introduced its Slate 500, a Windows 7-powered touch screen tablet PC for $799, billing it as "the ideal PC for professionals who don't work at a traditional desk, yet need to stay productive in a secure, familiar Windows environment."

The Slate 500 is higher than the price of category leader iPad, which ranges in price between $499 and $829. It has an 8.9 inch LED-backlit display and a 1,024 x 600 pixel resolution, weighs 1.5 pounds and unlike the iPad, it has two cameras, a VGA webcam for video conferencing and a 3MP camera. The screen size of the iPad is 9.7 inches. The Slate 500 also comes with 64 gigabytes of storage, five hours of battery life and a digital stylus pen. It has an Intel Atom Z540 Processor, which is typically found on lower-end notebook computers; 2 GB of memory; Bluetooth; and 802.11b/g/n Wi-Fi connectivity, although it does not have a built-in feature to connect to high-speed wireless networks.

Accessories including a keyboard, mouse and printer can be connected with the built-in USB 2.9 port. Photos and other files can be imported with an SD card. It also comes with Evernote software for writing emails and taking notes, as well as pre-installed HP Support Assistant, for help with maintenance and trouble-shooting, Adobe Reader and Adobe PDF. The computer maker said the tablet, available now online, is being launched first in the U.S.

Besides the iPad, the Slate 500 will compete against the Android-powered 7-inch Samsung Galaxy Tablet, which will retail for $599.99 at Verizon Wireless in November; the 5-inch Dell Streak from AT&T, for $550, and a 7-inch BlackBerry PlayBook tablet that Research in Motion announced in September. Since Apple launched the iPad last April, it has sold more than seven million units. Apple has marketed the iPad as mainly a consumer device.

We welcome your comments on this topic on our social media channels, or [contact us directly] with questions about the site.
Comment  |
Email This  |
Print  |
RSS
More Insights
Webcasts
Take DevOps to the Next Level
Cybersecurity Risk Management
More Webcasts
White Papers
SANS 2021 Cyber Threat Intelligence Survey
The Promise of XDR for Effective Threat Detection and Response
More White Papers
Reports
Protection Strategies for a Cyber-Resilient Organization
Building the SOC of the Future
More Reports

Does Identity Hinder Hybrid-Cloud and Multi-Cloud Adoption? Joao-Pierre S. Ruth, Senior Writer,  4/1/2021
White Papers
Cloud Threats Are Different, Your Security Should Be Too
The Impact of the SolarWinds Breach on Cybersecurity
Protect Cloud Workloads Against Dangerous Cyberattacks
The Need for Speed: Second Generation EDR
Take Control of Security Operations with Consolidation and XDR