Facebook plans to widen the reach of the Internet thanks to a pair of new WiFi initiatives under development -- Project ARIES and Terragraph. Both look to increase Internet access in hard-to-cover areas.

Facebook's mission to bring wireless Internet to all just got larger with the company's announcement of Project ARIES (Antenna Radio Integration for Efficiency in Spectrum) and Terragraph -- two terrestrial systems focused on improving the speed, efficiency, and quality of Internet connectivity around the world.

Terragraph is a 60 GHz multi-node wireless system focused on bringing high-speed Internet connectivity to dense urban areas, while ARIES is a proof-of-concept effort to build a test platform for more efficient usage of spectrum and energy.

Utilizing commercial, off-the-shelf components, and leveraging the cloud for intensive data processing, the Terragraph system implements a phase array antenna, which can retain the highly directional signal required for 60 GHz, and make it steerable to communicate over a wide area. 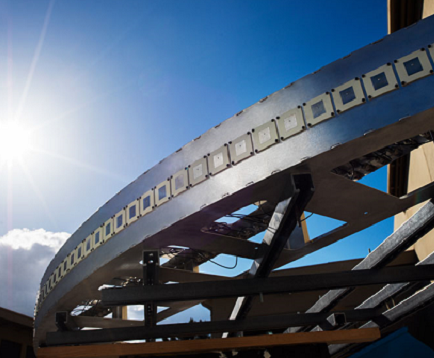 The system can be attached to a building externally and connected to an internal Ethernet data network for customers in multi-unit residences or businesses in high-rises.

"While access to high-speed Internet varies across the globe, both developing and developed economies can suffer from insufficient data rates," Facebook's Ali Yazdan Panah and Neeraj Choubey wrote in an April 13 blog post detailing the two projects. "Slow Internet speed is especially prevalent in developing economies where mobile networks are often unable to achieve data rates better than 2G."

The company is currently testing Terragraph at Facebook's headquarters in Menlo Park, Calif. It's preparing a broader trial in San Jose, and has plans to build large-scale trial networks in many markets around the world.

The Project ARIES concept is part of an effort build a base station with 96 antennas. The configuration can support 24 streams simultaneously over the same radio spectrum.

ARIES is part of Facebook's effort to provide higher throughput in the smallest bandwidths and improve energy efficiency by allowing for extended coverage ranges.

Project ARIES is an embodiment of such a technology -- massive multiple input, multiple output (MIMO) architecture currently used by 4G cellular and WLAN systems. At Facebook, the focus is on developing this technology to harness the gains in providing communications to rural communities from city centers.

According to Facebook's recent population distribution study across 20 countries, nearly 97% of the global population lives within 25 miles of a major city.

"Providing backhaul to rural environments can be prohibitively expensive, but the hope with systems such as these is that costly rural infrastructure can be avoided while still providing high-speed connectivity," the post stated.

Facebook also has more high-altitude plans in the works.

Its Aquila drone fleet is designed to provide limited Internet service to the estimated 10% of the world without reliable network access.

The company has some high-flying competition, however.

Google is expanding its ambitions for WiFi in the sky with Project SkyBender, which aims to deliver 5G wireless Internet from solar-powered drones, according to a January report in The Guardian.

Nathan Eddy is a freelance writer for InformationWeek. He has written for Popular Mechanics, Sales & Marketing Management Magazine, FierceMarkets, and CRN, among others. In 2012 he made his first documentary film, The Absent Column. He currently lives in Berlin. View Full Bio
We welcome your comments on this topic on our social media channels, or [contact us directly] with questions about the site.
Comment  |
Email This  |
Print  |
RSS
More Insights
Webcasts
Unifying Your Endpoint Security Strategy
Monitoring Critical Cloud Workloads
More Webcasts
White Papers
Ransomware, the Exploding Cyber Threat
The Tessian Human Layer Security Platform Architecture
More White Papers
Reports
Proven Success Factors for Endpoint Security
Cortex XDR Rides the Forrester Wave as a Leader
More Reports