The 8- and 12-bay iSCSI SANs include automated thin provisioning and management dashboards. 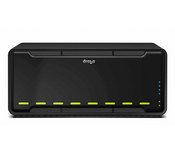 Founded in 2005, Drobo started out as a consumer play, with a goal of offering large storage capacity in a small device that didn't require a ton of technical know-how. Now it finds itself in the small and midsize business (SMB) segment almost by accident. The company conducted a survey of its current customers with research firm TechValidate last year. Among the findings: "Thousands" of its roughly 150,000 deployed devices had been purchased by SMB staffers for business use, with a particular lean toward the company's DroboElite product, an 8-bay iSCSI SAN unit.

"Our customers are dragging us in," said Kevin Epstein, Drobo's vice president of marketing. "Their point to us was: Why don't you sell an 'official' business product?"

Drobo's research found that the DroboElite and other devices were most commonly used to support server virtualization, email, file sharing, and backup. Once it realized it was in the B2B space by default, it asked current customers what else they would want in a business-oriented family of products.

As a result, Drobo on Tuesday announced its initial business lineup: An 8-bay file-sharing device with remote backup and an 8-bay iSCSI SAN -- both available immediately -- and a 12-bay iSCSI SAN that will be released in Q2. The new lineup features automated thin provisioning aimed at taking the guesswork out of capacity planning. Also included is a new management dashboard built for business users and capable of managing multiple devices, as well as available 24-7 support and same-day-ship replacement. Drobo updated the look-and-feel of the devices to produce a more industrial appearance, based on feedback from current business customers. Pricing starts around $2,200. The 12-bay Drobo will be expandable up to 36 raw TB.

Drobo is targeting firms with 250 or fewer employees with its new lineup, though it found in its survey that it also had devices installed inside departments of Fortune 500 companies -- bought on a corporate purchase order. Like other IT vendors in the broader SMB universe, Epstein believes there is a chasm between low-end "cheap storage" and high-end "big-block storage" that can cost tens of thousands of dollars.

"There's nothing in the middle -- the midmarket is barren," Epstein said, who added that while Drobo will stick with its consumer business, the company is "all in" on the SMB segment. "We've heard you: We're here."

The company intends to stick with simplicity for users as a fundamental product development approach to the SMB segment, something it set out to do in the consumer market.

"If you open up your iPhone 4, it's actually remarkably hardcore tech," Epstein said. "But for the average person who picks it up, it's extremely accessible, right? It's a phone with some cool apps."

Storage might lack the star power of top-shelf smartphones, but Drobo believed in a parallel opportunity when it began building its consumer line and the company's patented BeyondRAID technology.

"You didn't need to see the complexity," Epstein said. "It was there to take care of you, but hidden behind elegant design."

Drobo essentially eschews the cloud -- at a time when competition in the market continues to grow -- for local applications and data storage, albeit in smaller physical devices than some legacy options. It does offer automated synchronization between two Drobo devices in different physical locations for additional redundancy. Epstein noted that the typical data capacity that Drobo deals in -- usually in TB increments -- can create headaches for online backup and synchronization.

The company is confident in its strengths -- Epstein returned to virtualization, email, file-sharing, and back as core applications -- and does not put on the airs of a be-all, end-all storage vendor for businesses. Epstein even pointed to some complaints the company has received from past clients, such as a customer that tried to run its credit card transaction server against a Drobo device and was unhappy with the performance -- "Please, let us refund your money," Esptein said, because Drobo was not designed for that use case.

"The notable storage failures in the SMB market are big companies that have the equivalent of the 18-wheeler semi; they chop off half the back and put in a smaller engine and say: 'Look, it's for small business.' We're not going to do that," Epstein said. "We're building a small truck."

We welcome your comments on this topic on our social media channels, or [contact us directly] with questions about the site.
Comment  |
Email This  |
Print  |
RSS
More Insights
Webcasts
Protecting Your Enterprise's Intellectual Property
How Elite Analyst Teams are Transforming Security with Cyber Reconnaissance
More Webcasts
White Papers
Transforming the Corporate WAN: Enterprise Network Insights
Threat Intelligence Solutions: A SANS Review of Anomali ThreatStream
More White Papers
Reports
Special Report: Edge Computing: An IT Platform for the New Enterprise
How IT Security Organizations are Attacking the Cybersecurity Problem
More Reports