Sales of traditional slates continue to slip as the more productive detachable form factor finds favor with business users, according to an IDC report.

Android slates dominated tablet shipments during the second quarter, but IDC expressed concerns about the platform's future in the enterprise. Apple's iOS scored well with consumers and mobile pros, while Microsoft's Windows platform brought up the rear.

The overall market contracted some 12.3% year-over-year, with shipments totaling 38.7 million during the three month period ending in June, according to IDC. In a report released Monday, IDC said Android accounted for 65% of shipments. iOS followed with 26% and Windows scored only 9%.

These platform percentages aren't too different from previous quarters, but IDC said there is some softness in sales of Android slates. Notably, companies that have historically made Android devices are beginning to offer Windows products.

Samsung and Huawei are two examples. Both companies delivered Windows-based products during the first half of the year. Previously, both concentrated their efforts on Android devices. 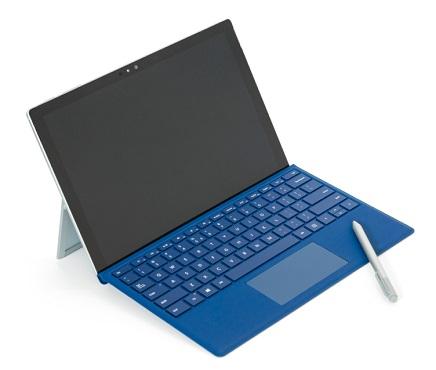 "The market has spoken as consumers and enterprises seek more productive form factors and operating systems -- it's the reason we're seeing continued growth in detachables," Jitesh Ubrani, senior research analyst with IDC's Worldwide Quarterly Mobile Device Trackers, said in a statement. "At present, it's difficult for Android to compete with iOS or Windows detachable products" in the enterprise.

iOS and Windows are better at multitasking, a key factor in aiding productivity. Microsoft's Surface-branded devices fall into the detachable category, as do the large and small iPad Pro tablets from Apple (since Apple sells a case/keyboard accessory).

Slates still account for more than three-quarters of tablet shipments, so the form factor isn't ready to die quite yet. IDC says we can thank Amazon for the slate's success, as its Fire-branded tablets continue to score points with consumers.

"Vendors like Amazon, with a very focused approach to positioning, price, and purpose, managed to capture a considerable share of the market. Slate sales are declining, but they still serve a purpose and will do so for a long time to come," said Jean Philippe Bouchard, research director for tablets at IDC, in a statement.

Looking at individual hardware makers, Apple claimed the top spot again with shipments of 10 million. iPad sales have been in the decline for some time, but the more costly iPad Pros have helped raise the average selling price.

Samsung is playing second fiddle to Apple with shipments of 6 million devices. IDC says its strategy of covering all price points and form factors helped Samsung keep Lenovo at bay, which primarily shows strength across Asia/Pacific, Europe, and the Middle East.

Lenovo shipped about 2.5 million tablets. Huawei's Windows-based Matebook and its Android-based offerings together kept the company in fourth place with shipments of 2.2 million. Amazon rounded out the top five with shipments of 1.6 million.

Microsoft can be found under the "other" category. IDC didn't offer a breakdown of Windows versions in its analysis. It would be interesting to know the number of Windows devices shipping with Windows 10, compared to other variants, especially considering the OS's lack of favor within many enterprises.

Eric is a freelance writer for InformationWeek specializing in mobile technologies. View Full Bio
We welcome your comments on this topic on our social media channels, or [contact us directly] with questions about the site.
Comment  |
Email This  |
Print  |
RSS
More Insights
Webcasts
The Failures of Static DLP and How to Protect Against Tomorrow's Email Breaches
Protecting Your Enterprise's Intellectual Property
More Webcasts
White Papers
The Insecure State of Microsoft Teams Security
Cloud Connectivity -- Your Guide to the Network
More White Papers
Reports
The State of Cloud Computing - Fall 2020
Special Report: Edge Computing: An IT Platform for the New Enterprise
More Reports

The Lumia 950 is the phone that I refer to as "almost there".  It's not quite a full desktop experience even with Continuum.  It gets just close enough for us to see what is possible, get a taste for what could be but then stops dead.  I kept hoping that the Surface phone rumors would be a phone running a full desktop version of Win10 that runs in tablet mode on the phone but with MHL or a small dock will expand out to a full desktop experience.  I use my surface display for my calendar and notifications with a larger monitor as a desktop display.  I would love to do this which something like a 5" phone but we're just a couple small steps away from making that happen.  I can use my Android phone this way via MHL cables and Andronium but it won't run any of the Microsoft Office apps.  If it could do that I might put my Surface away forever.
Reply  |  Post Message  |  Messages List  |  Start a Board

"Microsoft has already accomplished the OS across all devices. "

I'm going to argue this one with you, Windows 8 Phone is not Win 8 or Win 10.  I have yet to see a phone that runs a desktop OS reliably.  Conical has tried it with Ubuntu but that is still struggling and I run Andromium on my phone but the level of development means only about half of the apps I need work in desktop mode.   I really thought that we would see iOS and OSX merge right around now and that Win Mobile would merge with Windows desktop versions shortly afterward.  Instead we got an almost usable kludge from Microsoft https://www.microsoft.com/en-us/windows/Continuum

I have no doubt that we'll get there, I just wonder who will get there first since at least two of the biggest OS players have almost there options now.

One OS for all devices would be the best and easiest and cheapest to maintain for LEs and SMBs. But, as you say, >> So far Microsoft has done well bringing that experience down to the tablet format but stalled there.

Microsoft has already accomplished the OS across all devices.  However the Surface Pro 4 consolidates desktop, laptop, and tablet into one device using a docking station with dual monitors, particularly applicable to the mobile worker with an office (home or business).  The primary drawback is price.  The price point for a business class Surface Pro 4 (iSeries processor, max ram, max disk) is not acceptable to the average consumer.  Both Lenovo and Acer now offer favorable Surface Pro alternatives at a somewhat better price point while HP and Dell are just as costly as Microsoft. At the business level these detachable tablets are going to be more and more popular.  The consumer market will be a harder market to crack for such Windows devices for most of the same reasons as in the past.  The Windows Store and Windows Apps still suck.
Reply  |  Post Message  |  Messages List  |  Start a Board

I've been a big fan of the shrinking laptop that we are now calling detachable tablets and from Win 8 on was hopeful that Microsoft and Apple would bring the full desktop experience to every device.  So far Microsoft has done well bringing that experience down to the tablet format but stalled there.  I don't mind if the answer is dumbing down the desktop experience a bit but one OS across all devices would make me so happy.  There are a few flavors of Android trying to bring it to the desktop but they ignore the mobile market. Eventually I think we'll get there and I really expected Apple to get there first but if Microsoft can keep some momentum up with the tablet market they might be the first ones to get the mobile form factor right.
Reply  |  Post Message  |  Messages List  |  Start a Board
Editors' Choice
Hot Topics