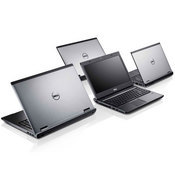 (click image for larger view)
Dell Vostro 3000 Laptops
Dell on Thursday introduced the 3000 series of laptops and a new all-in-one desktop to its Vostro line for small businesses.

There are four Vostro 3000 series laptops: 13-, 14-, 15-, and 17-inch models. Dell's primary market for the Vostro family is smaller companies with little or no internal IT support. The newest members will ship with Intel's recently corrected Core i3, i5, or i7 processors, also known by their codename Sandy Bridge. Dell had suspended delivery of Sandy Bridge-based PCs until Intel fixed a flaw in the chipset.

"We were the first ones to be shipping Sandy Bridge again after we needed to get the fix in place," said Alison Gardner, marketing director for the consumer and SMB product group at Dell, in an interview. "We're very quickly, as we refresh across all of our different brands and lines, introducing Sandy Bridge ASAP. So, we're totally on track."

In the collaboration and video conferencing department, Dell is touting the addition of SRS Premium Voice Pro, software that detects the user's voice and adjusts the volume on the PC accordingly. All but the smallest Vostro 3350 model also offer built-in high-definition webcams.

The 3000 series includes fingerprint scan security. Optional 8-cell and 9-cell batteries run for around 12 hours, according to Dell. The 13-inch 3350 comes with a 4-cell battery; the larger models ship standard with 6-cell batteries. The laptops are offered in three worldly colors: "Brisbane Bronze," "Lucerne Red," and "Aberdeen Silver." Pricing starts between $499 and $599 across the four models.

New to the 3000 series is a backlit chiclet-style keyboard. "It was well-received on a number of Inspiron products," Gardner said. "We did additional tests, after we brought the last generation, on industrial design, keyboard, etc., and it was really clear that chiclet keyboard was preferred."

Gardner said that Dell added emphasis on exterior design with its new Vostro 330 all-in-one desktop, noting that the form is commonly deployed in areas of the business where appearance matters. "Typically with all-in-ones, you are using it in front office or at least in front of customers, so you really care about having a design that looks nice from every single angle," Gardner said.

"The whole touch ecosystem and our experiences with touch have grown exponentially over the past number of years," Gardner said. "Now you've got kids who are growing up with that functionality, who didn't know a world before iPhone and iPad and different tablet functions. In this form factor, it just lends itself well."

We welcome your comments on this topic on our social media channels, or [contact us directly] with questions about the site.
Comment  |
Email This  |
Print  |
RSS
More Insights
Webcasts
How Cyber Attackers Will Use & Abuse AI, ML Against the Enterprise
5 Ways to Jumpstart AI
More Webcasts
White Papers
Getting The Right Cloud Management
Commitment to Innovation Secures Longtime Customer
More White Papers
Reports
CyberSecurity Trends 2020
Collective Offense Calls for Collective Defense
More Reports