0 comments
Comment Now
Tweet
Blade servers can be a cost-effective alternative to rack-based IT gear, according to HP's John Gromala, and offer a growth path from towers. 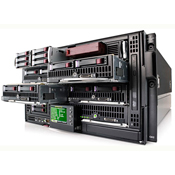 HP c3000 Blade Server
If your company is outgrowing or ready to refresh a collection of tower servers, but is offset by the price and the management complexities of moving to a rack, there's another option, according to John Gromala, director of product marketing, HP Industry Standard Servers and Software at HP: blade-based solutions.

For small to midsize businesses, on-premises IT infrastructure -- servers, networking, and storage -- must balance current cost with room and flexibility to handle more employees, applications, and business activity. Traditional tower servers are straightforward and highly affordable, but won't grow or scale well; rack-based IT gear can grow, but can be expensive, and can require IT time to add new servers.

According to John Gromala, director of product marketing, HP Industry Standard Servers and Software at HP, depending on the size and scope of a company's IT requirements, there's a third option which can be most affordable and flexible: blade-based solutions.

According to Gromala, blade solutions can offer IT and business benefits important to SMBs including:

-- Easy to install, easy to upgrade capacity as IT requirements grow

"A blade system can provide an 'IT infrastructure in a box,'" said Gromala. "It can be more easily deployed than a rack, and can grow easily -- you just buy and insert another blade module. The modular infrastructure of a blade system lets customers pick what they need to match their requirements."

For example, according to Gromala, a company could start with a chassis containing two, three or four server blades to handle existing server applications like Exchange, SharePoint, Active Directory, file and print serving, CRM, and an intranet.

Server Technology Hits A Crossroads
Subsequently, if more processing or storage is needed, to support additional users, a higher workload, or additional applications, such as medical or dental office environments, additional server blades can simply be slid into the available slots, versus bringing in an additional tower, or having to connect a new rack server to power, storage, networking, and management components.

According to Jed Scaramella, research manager, Enterprise Servers at IDC in an August 2010 report, "Blade adoption continued to gain momentum in the second quarter of 2010, as blades accounted for its largest portion of total server revenue since the form-factor came to market."

Blades are also well suited to server virtualization, said Gromala. Virtualization lets one server blade act like it is several physical servers each dedicated to a specific application. "Virtualization needs a balanced architecture of I/O and memory. Blades' I/O capability is well-suited for virtualization. And blades are good for SAN storage, which many medium size businesses use, consolidating the storage and processing.

HP's c3000 can use "low-line" outlets (like 110 volts), and can be used in rooms with limited air conditioning. This makes it a good match for SMBs that do not have a data center or dedicated computer room.

"There aren't any applications that can be run on rack servers that can't be run on blade servers," stated Gromala. "From a compute density perspective -- more of interest to high-end enterprises than to SMBs -- I can get more density from blades than racks. We crossed that recently with server blades that can have up to one terabyte of memory. Some of the more rich compute configurations can be deployed on blades as well."

Blade solutions can be significantly less expensive than rack solutions, according to HP. "The basic cost for blade servers and rack servers are about the same," said Gromala. "The big difference is in the infrastructure. Many people just compare the cost of servers, and don't consider the rest of the costs."

Server Technology Hits A Crossroads
Infrastructure costs for a rack solution, according to Gromala, start with the physical racks, and networking switches. "Plus you have to allocate a room, and typically need specialized power brought in, possibly including a PDU (Power Distribution Unit), and specialized cooling."

Also, according to Gromala, blade environments are less complicated. For a system with 16 servers to support a typical virtualized environment, the networking for a rack solution would require around 215 adapters, switches and cables and other components, while a blade solution from HP could be done with a pair of HP Virtual Connect Flex modules.

For example, a c3000 chassis with 1GB networking and a single server costs a few thousand to deploy, according to Gromala. In general, Gromala said, factoring in all the pieces required to deploy a rack, including some of the power savings, HP blade-and-chasses solutions cost roughly 40% less than a rack solution.

Another advantage that blade solutions can offer over rack solutions -- depending on the computing workload and the company's office environment -- is not requiring special facilities. A c3000 enclosure can run with regular office power and air conditioning -- however, Gromala noted, under heavier workloads, the system might be too noisy.

Overall, according to HP, blade enclosures reduce the cost to run and maintain an IT hardware infrastructure; let upgrades and additions be done much more quickly and easily -- which makes it easier for IT to provision for new requirements or opportunities; and use less power and cooling, which controls cost and also reduces the likelihood of needing more power than a site has available.

According to the IDC report, "HP maintained the number 1 spot in the server blade market in 2Q10, with 55.8% revenue share, and IBM finished with 24.2% revenue share."

For a small-to-midsize business, where IT money, time and space are always at a premium, but where the ability to increase IT server and storage capabilities quickly and easily is valuable, that makes blades, and blade enclosures, well worth looking into.

We welcome your comments on this topic on our social media channels, or [contact us directly] with questions about the site.
Comment  |
Email This  |
Print  |
RSS
More Insights
Webcasts
Now That Ransomware Has Gone Nuclear, How Can You Avoid Becoming the Next Victim?
Securing Active Directory the Way it Deserves
More Webcasts
White Papers
DevOps for the Database
2020 State of Malware Report
More White Papers
Reports
Online Threats -- and What Your Org Can Do About Them
[Special Report] Remote Network Management
More Reports
Copyright © 2020 UBM Electronics, A UBM company, All rights reserved. Privacy Policy | Terms of Service