50%
Tweet
NASA's Curiosity Mars rover has a toolbox to make any gadget-lover jealous. Check out our drill-down on the instruments helping determine whether microbial life ever existed on the red planet. 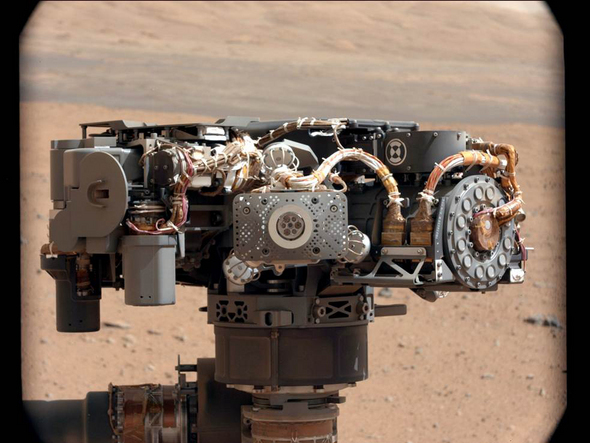 As it rolls along the surface of Mars, NASA's Curiosity rover has begun putting its Swiss Army knife of scientific instruments to work. The six-wheeled vehicle is using nearly a dozen high-tech instruments to touch, scoop, sift, clean, and analyze rocks and dirt on its mission.

NASA recently said Curiosity had found "surprises" in the chemical makeup of a rock--dubbed Jake Matijevic by NASA scientists--that it probed. The rock's chemical composition resembled that of igneous rocks from the Earth's interior.

The high-flying lab has been exploring and snapping pictures of the Gale Crater since landing on the Red Planet on Aug. 6. It's also checking in on Foursquare, making it easier for observers to track its progress.

Curiosity is about to begin conducting sample analyses of its surroundings. In about two weeks, the rover will start depositing first soil samples into its analytical instruments, according to the space agency.

Curiosity carries 10 scientific instruments--or 11 if you count its atmospheric sensors, MEDLI. It's the most advanced scientific gear ever used on Mars. The tools are being used to assess the habitability of the planet.

Curiosity recently stretched out its robotic arm and touched the football-sized rock Jake, then used its Alpha Particle X-Ray Spectrometer (APXS), located on a turret at the end of its arm, to determine its chemical elements. The Mars Hand Lens Imager (MAHLI) and ChemCam instrument, which shoots laser pulses at targets, were also used in the close-up inspection. APXS is pictured above.

NASA is using 17 onboard cameras as Curiosity rolls along. In late September, the rover's Mast Camera captured evidence of a stream that once ran across the north rim of Gale Crater and the base of Mount Sharp, located inside the crater. It was the first such evidence of water on Mars, according to NASA.

Now Curiosity is in position at Rocknest, a site where it collected an initial scoop of soil on Oct. 7. The rover will take three more scoops before it delivers a fourth scoop of sand and powdery material to be analyzed by two of its instruments: Chemistry and Mineralogy (CheMin) and Sample Analysis at Mars (SAM). "We are being very careful with this first time using the scoop on Mars," said Daniel Limonadi, lead systems engineer for Curiosity's surface sampling and science system, in a statement.

The rover is powered by sophisticated software that helps control its instruments. Shortly after Curiosity landed on Mars, NASA engineers at the Jet Propulsion Laboratory upgraded its software, providing better control over its robotic arm, drill, and other instruments. Within the next 12 months, NASA plans to deploy software on Curiosity that can be used to target subjects and take pictures on the go. Image credit: NASA

Just wait until they send the second rover up to Mars with all the upgrades and changes the discovered form the first trials. With as many cameras as Curiosity has it is sure to monitor some better uses for the tools they currently , plus some new ideas for the next trip and future tools. The capabilities of these cameras is amazing from chemical analyzing to communicating images back to us for our viewing pleasure, so they also work almost like a phone home.This machine is truly state of the art, and although grabbing a rock to analyze might not seem like a big deal, when the rock that was selected was selected due to the Alpha Particle Xray feature, then grabbing rocks becomes pretty interesting topic