50%
Tweet
The latest version of Explorer, now available in public beta, is the company's attempt to get back into the web browser race and its success will determine if users look to Microsoft or elsewhere for their window to the web. Peek in on the beta launch event and the new features in this slideshow. 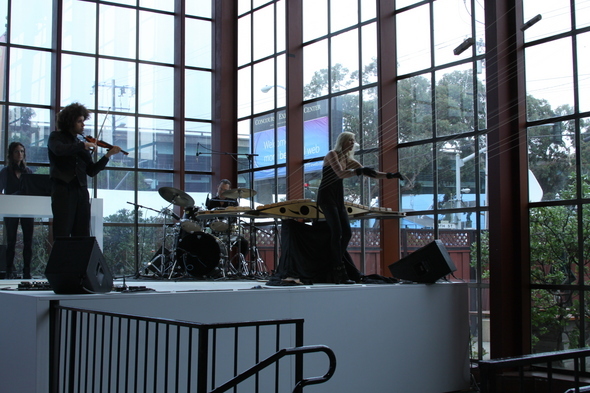 While journalists and Microsoft partners waited to enter the IE9 keynote area, we were entertained thus. The band was actually quite good.

Microsoft on Wednesday announced the availability of the Windows Internet Explorer 9 Beta, the company's attempt to get back into the web browser race for real. In some respects, IE9 puts Microsoft in the lead, thanks to its support for hardware accelerated HTML5 graphics. It's a lead that won't last: Both Mozilla Firefox and Google Chrome will have hardware acceleration in mainstream releases before too long.

In fact, Mozilla's Aza Dotzler says that Firefox uses the same Windows APIs for its hardware acceleration and that Firefox accelerates Windows XP, which IE9 doesn't do since it doesn't run on Windows XP. "We are faster and we were first," declared Dotzler last week.

IE9 may not settle the debate about which browser is better but it does put Microsoft back in the race. After years of steadily losing browser market share, Windows 7 and IE9 have proven that Microsoft can still compete.

Dean Hachamovitch, corporate VP at Microsoft, argues that the focus should be on the website rather than the web browser. That makes sense in a way, but Microsoft itself has clearly spent a lot of time focused on IE9. And as much as Microsoft might wish that users ignore the browser and think only of Windows, IE9 is sure to be compared to Chrome, Firefox, Opera, and Safari.

What matters in the end is whether Windows users look to Microsoft or elsewhere for their window to the web.

Review: IE9 May Be Best Version Yet