Can Waze Save Apple Maps? - InformationWeek

Incorporating Waze navigation and local search into Apple's Maps app and service would address many of the problems that have earned Apple its poor mapping reputation. Unfortunately for Android users, Apple would probably pull the plug on Waze use, or at least relegate them to second-class status.

[UPDATE: There will be no Apple/Waze deal. TechCrunch, who originally reported the story, now reports that there will be no such deal. The column below still makes for interesting speculation.]

Numerous sources are reporting rumors that Apple is taking a long hard look at buying Waze, a crowd-sourced, GPS app developer for both iOS and Android. The idea has merit, but includes a couple of problems. Let's take a quick look and run through them.

As a quick reminder, I listed Waze as an honorable mention in the 2012 version of Byte's Top 5 GPS Apps For The iPhone. I've got a 2013 version currently cooking; but let's get to the pros and cons of an Apple acquisition of Waze. 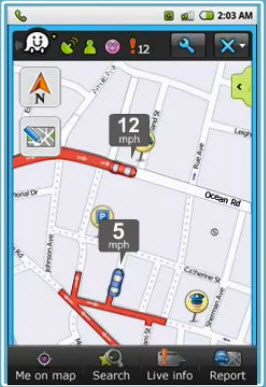 Based on passive user reports, Waze shows you the speed of traffic on alternative routes
Pros

Waze shows how their app and service work.

In one step, Apple could go a long way to resolving two of its biggest map based criticisms by acquiring Waze. It wants to vindicate Tim Cook's public apology for Apple Maps and it wants to be a serious player in mobile search. Waze does this well and would likely be an acquisition that would increase its competitive edge with Google. From this perspective, it's a winning move from a number of different angles.

This is likely going to be a serious negotiation point for both Waze and Apple as getting map validation from ALL users, regardless of platform, is likely the biggest point of value for Apple. Post-acquisition, ending Android support of Waze would likely reduce its value.

Acquiring Waze could be a very good thing for Apple. How Waze would fare post acquisition is unknown; but it's very likely the app would be chopped up and cannibalized for its back end data gathering and validation services. Android support would likely also need to be discussed, post acquisition.

I'm not entirely certain how the company would view all of this, but it's very possible that it wouldn't matter so much if Apple waved enough of their hoarded cash at them. What do you think? I'd love to hear your thoughts in the discussion below.