Go inside a FIRST Robotics regional competition in Ft. Lauderdale, where tomorrow's tech leaders put robot creations to the test. 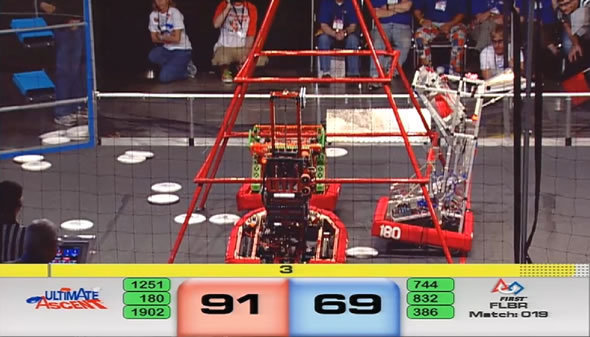 As the 2013 South Florida FIRST Robotics Competition entered its final rounds, the roar from the crowd was intense.

After watching and hoping for the first 15 seconds of autonomous play, the high school students who had built these robots took control, aggressively piloting them around the field, pushing and blocking each other's machines while playing a sort of robotic Ultimate Frisbee game that required them to launch flying discs into goals at either end of the playing area. Finally, the robots converged on red and blue pyramids built of pipes, and they began to climb.

The three teams from the Red Alliance didn't make it beyond the first rung, but, when the buzzer sounded, the umpires verified that all three were off the floor, earning 10 bonus points each in addition to all the goals they had scored. At the end of the best two out of three rounds, the Red Alliance, comprising three Florida teams -- 2012 world champions S.P.A.M. of Stuart, Exploding Bacon of Winter Park and the Tech Tigers of Coconut Creek -- emerged victorious.

The event at the Greater Fort Lauderdale Convention Center on Saturday was one of dozens taking place around the country during this qualifying season. The victors of the South Florida competition will be going on to the championship scheduled for April 24-27 in St. Louis.

Although the competitions are exciting, victory has as much to do with decisions the competitors make long before they step onto the playing field.

There are ongoing rules of conduct and fair competition, but the challenge is different every year. Competitors spend the off season studying the basics of robot engineering and working on other critical functions such as fundraising. Once this year's Ultimate Ascent challenge was announced in January, teams had six weeks to complete the entire design and build of a robot that could accomplish a specific list of tasks: maneuvering, throwing and climbing. The build season includes everything from the initial sketches to machine shop work and component assembly, plus writing thousands of lines of software code. When the six weeks are up, teams are required to go "hands off" on the robots except during a competition, when their pit crews can do additional tinkering and fine tuning.

The FIRST (For Inspiration and Recognition of Science and Technology) program started in 1992 with a 28-team event in a New Hampshire high school gym. This year's FIRST Robotics Competition (FRC) event for high school students has about 2,700 teams jousting in regional competitions leading up to this year's championship in St. Louis. Although FRC is the major event, the program has expanded over the years to also include the FTC (First Tech Challenge) program for grades 7-12, FLL (First Lego League) for grades 4-8, and Jr. FLL for grades K-3.

FIRST founder Dean Kamen is best known as the inventor of the Segway but also of the Independence robotic wheelchair and other medical devices. Kamen conceived of the competition as a way to give students practical exposure to engineering challenges by pairing them with professional engineers as mentors. Teams can be organized within schools or community groups. Exploding Bacon, one of the winning teams at the South Florida competition, is a 4H Club.

Sponsors include NASA and major aerospace and technology firms, as well as community groups and companies of all sorts that support their local teams.