What CIOs Think About Online Holiday Shopping At Work - InformationWeek

In the next few weeks workers will be tempted to peruse the Internet for killer discounts on four of the busiest online single-day shopping events of the holidays. A recent survey reveals the likelihood of whether your boss will be a Grinch or offer good cheer if you're caught.

Starting this week, workers will feel the increasing pull to peruse the Internet for killer discounts on holiday gifts. After all, retailers are already touting deals to be found on Thanksgiving Day, Black Friday, Cyber Monday, and Green Monday.

But if you're at work when the shopping bug hits, what are the odds your boss will be cool with this extracurricular activity?

Only 25% of CIOs surveyed said their companies allow unrestricted access to shopping sites, while nearly half, 48%, said they allow access, but monitor employees for excessive time spent on the sites.

"Many professionals appreciate the ability to get some quick online shopping done at work during the busy holiday season," said John Reed, senior executive director of Robert Half Technology, in a statement. "But employees should recognize that most companies keep tabs on their online activity. Professionals should follow safe and secure browsing practices, and keep distractions at work to a minimum." 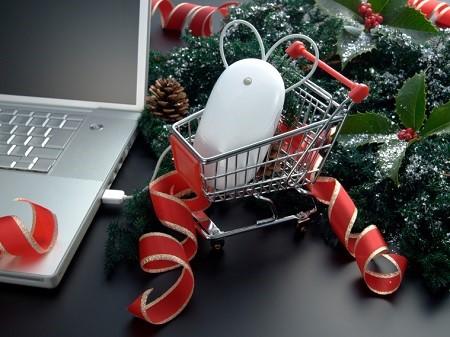 According to a Robert Half Technology survey of more than 1,000 US adult office workers, 24% have been caught shopping online by their boss. Of this group, 15% received a reprimand for shopping instead of working, while a far higher number, 31%, had a favorable outcome of "talking shop" with their manager.

The takeaway from these stats? Holiday cheer beats the Grinch.

Ones co-workers, however, get increased scrutiny. The survey found that 28% of employees said they believed their co-workers weren't pulling their weight when they scanned shopping sites on the company dime. Interestingly, though, a similar percentage of co-workers who shop online while at work, 30%, felt guilty about their activities.

The co-workers who feel other employees aren't carrying their weight when shopping online may have a difficult time swallowing the theory, held by 19% of workers surveyed, that their productively actually goes up when they shop online, because they don't have to leave the office.

These employees will be joining a huge pool of online shoppers sitting at their desktop computers and executing orders on the following four single-day events, which last year generated a total of approximately $6.2 billion in sales, according to comScore:

Although employees and other consumers threw far more money at Cyber Monday sales, its growth rate pales in comparison to Thanksgiving Day and is less impressive than Black Friday.

"Thanksgiving's recent growth is likely occurring because traditionally, it was more of a hassle to go online during the holiday when you're spending time with family," said Adam Lella, senior analyst of comScore's Marketing Insights. "Now, as people are more connected online than ever before due to smartphones and tablets, and as Internet speeds are faster, it's easier to quickly do some online shopping in between or while hanging out with family."

He added there is no reason to believe that Cyber Monday will lose ground to another single-day sales event in the near future. Since 2009, Cyber Monday has been ranked as the No. 1 online shopping day, having taken the title from the previous top dog Green Monday, according to comScore. Green Monday got its name from being thought of as the best sales day in December. It is typically held on the second Monday of December, which is this year is December 14.

"Cyber Monday built a strong reputation for being one of the heaviest online spending days, which in turn caused retailers to push their biggest promotions on that day, which only then made it the top ranked online spending day," said Lella.

Dawn Kawamoto is an Associate Editor for Dark Reading, where she covers cybersecurity news and trends. She is an award-winning journalist who has written and edited technology, management, leadership, career, finance, and innovation stories for such publications as CNET's ... View Full Bio
We welcome your comments on this topic on our social media channels, or [contact us directly] with questions about the site.
Comment  |
Email This  |
Print  |
RSS
More Insights
Webcasts
People Are The Most Important Part of Autonomous SOC
Nip Ransomware in the FUD: Detecting Attacks Pre-Encryption
More Webcasts
White Papers
Supercharge Incident Response with DDI Visibility
Improving Security by Moving Beyond VPN
More White Papers
Reports
Building the SOC of the Future
2021 Top Enterprise IT Trends - Network Computing
More Reports

I agree. Has anybody here lead a team and saw their subordinates surfing the web during work hours?.  I wouldn't mind as long as they are able to do their work on time on schedule.
Reply  |  Post Message  |  Messages List  |  Start a Board

Correct, and thus those employees can better focus on the task at hand
Reply  |  Post Message  |  Messages List  |  Start a Board

shakeeb you make an excellent point when employees feel watched they don't feel trusted and it leads to overall job dissatisfaction. Much more costly than some time spent on the web holiday shopping.
Reply  |  Post Message  |  Messages List  |  Start a Board

Employees spending some time shopping could atually make them more productive becasue they won't be worried about gettng their holiday obligations met.
Reply  |  Post Message  |  Messages List  |  Start a Board

Thank you so much for sharing.

I think the work environment has a big impact. In some areas doing some personal web browsing/shopping is simply seen when someone needs a 5 min distraction after spending 2+ hours in a given task (I know I do). In other others you can barely get away at glazing at your phone screen.

i agree with your statement, by allowing employees a little freedom (as long as it's not abussed) leads to more productivity, since folks are able to get one or two errands done online that was occupying there thoughts, and are then better abe focus (again, I know I do)
Reply  |  Post Message  |  Messages List  |  Start a Board

@shamika – you could probably allow access to these sites during a specific time frame. I.e. The employees will have access to these pages during their break hours.
Reply  |  Post Message  |  Messages List  |  Start a Board

@ Whoopty – I agree with you on this. Employees need some motivation and time they could spend online. Restricting this access itself could be a demotivating factor.
Reply  |  Post Message  |  Messages List  |  Start a Board

@SunitaT0 – I think Facebook is one reason why you see employees online when they have to concentrate on work. If we have a look at the time they spend on Facebook it's immense.
Reply  |  Post Message  |  Messages List  |  Start a Board

I don't think employee monitoring is required as they are mature enough to understand their responsibilities and work accordingly.
Reply  |  Post Message  |  Messages List  |  Start a Board

I think employees should have freedom to access general internet sites at work, but it's their duty to ensure that the work is not compromised by accessing internet.

Communications & Collaboration: 2024 (March 9-10)The Future of Authentication - Interop Digital April 29Network Security for 2021 and Beyond (April 29)