Verizon Buys AOL For $4.4B To Bolster Video - InformationWeek

Verizon moves into the mobile advertising space with the $4.4 billion acquisition of AOL, which also gives the company a stronger foothold in OTT video.

20 Great Ideas To Steal In 2015
(Click image for larger view and slideshow.)

Communications giant Verizon announced it is snapping up Internet and media company AOL for $4.4 billion as part of its plan to further build digital and video platforms.

Tim Armstrong, AOL's chairman and CEO, will continue to lead AOL operations after the deal closes. The transaction will take the form of a tender offer followed by a merger, with AOL becoming a wholly owned subsidiary of Verizon upon completion.

The deal is yet another strange twist of fate for AOL, which once dominated and Internet through its dial-up service. A company once powerful enough to buy Time Warner, AOL fell on hard times after the deal, while the Web changed in dramatic ways thanks to broadband and the emergence of Silicon Valley giants such as Google.

Try as it might to re-invent itself through various projects and media assets, the halcyon days of the 1990s never returned. 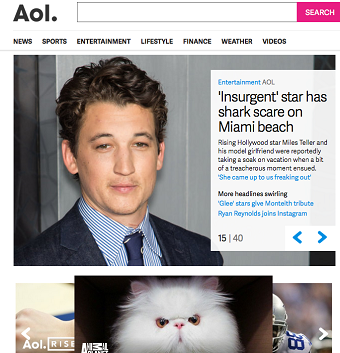 Still, AOL had enough assets and IP to attract a buyer, especially one hungry enough for more customers who want to keep expanding their mobile experience, especially through ubiquitous video, and those advertisers who are desperate to reach them.

"AOL has once again become a digital trailblazer, and we are excited at the prospect of charting a new course together in the digitally connected world," Lowell McAdam, Verizon chairman and CEO, wrote in a statement, after the two companies formally announced the deal on Tuesday, May 12.

"This acquisition supports our strategy to provide a cross-screen connection for consumers, creators and advertisers to deliver that premium customer experience," McAdam added.

It's All About Video

In addition to Verizon's mobile video and Over-The-Top (OTT) plans, the merger will also support and connect to the company's Internet of Things (IoT) platforms.

The concept of OTT refers to the consumer preference for watching video content on mobile devices instead of (over the top of) their home television sets.

AOL's OTT assets -- largely aimed at mobile-content hungry Millennials -- are one of the key points of the acquisition, according to report in the UK edition of Business Insider.

"Verizon is zigging while the rest of the industry is zagging. They're trying to abound the commoditization of wireless by creating something truly differentiated around video," Craig Moffett, an analyst with MoffettNathanson, told Investor's Business Daily. "It's a smart strategy."

In a 2014 survey of 23,500 executives and consumers across 43 countries, research firm IDG Global Solutions revealed a dramatic increase in mobile video consumption, with nearly three-quarters (74%) of consumers using a smartphone to watch online videos, compared with 61% in 2012.

A February study by IT research firm Gartner suggests the trend toward mobile video is only accelerating -- the company expects mobile video traffic to grow 59% this year, and predicted video streaming would account for over 60% of mobile data traffic in 2018 as consumers increase the number of videos they watch and upload.

[Read about the latest development in net neutrality.]

"They want to integrate advertising and content programming with their wireless network," Roger Entner, an analyst with Recon Analytics told Bloomberg in response to the deal. "It's an ambitious plan, the mobile advertising market is dramatically dominated by Google."

The deal also brings AOL's story full circle -- albeit a circle with a much smaller diameter than when the company was able to pluck up media giant Time Warner for $164 billion in 2000.

Made on the eve of the dot-com bubble, the partnership, which was supposed to leverage AOL's Internet expertise to launch the lethargic media company, was dissolved in 2009 when Time Warner spun AOL off into a separate business entity.

In a Telegraph article in 2010, the disastrous deal was called "the biggest mistake in corporate history," by Time Warner's then-chief Jeff Bewkes.

Incredibly, AOL recently reported that 2.1 million Americans are still using its dial-up service, a nostalgia-inducing thought for many who still remember the scratchy, electronic connection noises and "You've got mail" catchphrase.

AOL's first quarter report also revealed third-party ads are continuing to boost revenues for the company, with that division growing by 19% year-over-year to $231.6 million.

Nathan Eddy is a freelance writer for InformationWeek. He has written for Popular Mechanics, Sales & Marketing Management Magazine, FierceMarkets, and CRN, among others. In 2012 he made his first documentary film, The Absent Column. He currently lives in Berlin. View Full Bio
We welcome your comments on this topic on our social media channels, or [contact us directly] with questions about the site.
Comment  |
Email This  |
Print  |
RSS
More Insights
Webcasts
What We Can Learn from Sports Analytics
Protecting Your Enterprise's Intellectual Property
More Webcasts
White Papers
Passwordless: The Future of Authentication
The 2020 Duo Security Trusted Access Report
More White Papers
Reports
The Malware Threat Landscape
Special Report: Understanding Your Cyber Attackers
More Reports

While I can appreciate what Verizon is trying to do - I am not completely sold that wireless based video will be the wave of the future.  Maybe some of the 4Bil should have been used to work on extending battery life - that is the real issue.
Reply  |  Post Message  |  Messages List  |  Start a Board

What do you do when you have an extra 4Bil to spend ?

I really could not believe this headline when I first heard it - really 4B for AOL ?    PT Barnum was right  about there is an sucker born every minute ....
Reply  |  Post Message  |  Messages List  |  Start a Board

the choke hold seems to be on " mobile-content hungry Millennials "


It will be interesting to see how Verizon streams this acquisition into their portfolio. As noted AOL has a lot of diversity in their offering and some costly customers (all those dial up clients) getting the two companies aligned and focused for long term profitability will be interesting.

That's what worries me the most with this move though, that Verizon now has a choke hold on some of the biggest tech publications in the world. It will be a space we need to watch to make sure it doesn't trickle down orders for propaganda regarding net neutrality to filter through to those various news sites.
Reply  |  Post Message  |  Messages List  |  Start a Board

Some people are giving AOL's executive staff some applause for, essentially, seeing the company through to a happy end and giving it new value at the 11th hour, and I'll agree to that. Every once in a while I still find myself directed to an AOL site for a piece of news or a funny video - I suppose that's good marketing at work. Compare them to the current state of contemporaries like Yahoo!, and they're really not doing too bad at all. As for 'Over The Top' video, I read the explanation in pretty much every attached article, and I still don't get it. How is it coming 'Over The Top' of my television set? That's not how I think of mobile content at all. Isn't it more like it's 'Cutting In Under' it? Sounds like some honk-worthy buzzword usage at it's finest.

I see what Verizon is thinking in regards to using their own pipes to deliver their own content to their subscribers (it seems 'value added' to use another buzzword), but I wonder if this is really where the future lies. Customers seem to complain about the cost and quality of service, not a lack of content or extra services from their providers. One analyst noted that AOL has built a strong network of 'programmatic [targeted] advertising', so one could see how Verizon fancies themselves getting in ahead of the game by buying that up. I wonder what will become of those 2.1 million existing AOL subscribers? You mentioned AOL will maintain some autonomy, so maybe they won't even notice a difference when they come online to find out they've got mail...
Reply  |  Post Message  |  Messages List  |  Start a Board

If the internal controls are in-place of AOL then, hopefully AOL will manage to maintain the independence of its news sites. However, now that you have mentioned it, a parent company is a parent company in the eyes of its employees and a subsidiary might have a conflict of interest.
Reply  |  Post Message  |  Messages List  |  Start a Board

I wasn't even aware that AOL had valuable video assets that a company like Verizon would want to purchase. I know AOL owns TechCrunch and Huffington Post, but I always thought those companies were focused on news. Hopefully this turns out to be a good bet for Verizon.
Reply  |  Post Message  |  Messages List  |  Start a Board
Page 1 / 2   >   >>
Editors' Choice
Hot Topics