Now that they can power everything from cars to data centers, Chevy Volt batteries show they do more than your average Energizer.

General Motors may not be the first company you think of when you hear the world recycling, but the auto giant has done just that by taking used batteries from its Chevy Volt electric vehicles and deploying them to power an enterprise data center at its Milford Proving Ground in Michigan.

The company is tapping into the energy left in batteries from first-generation Volt models by employing five of them at the data center, which feed the administration building's circuit breaker panel, working in parallel with a new solar array and two wind turbines.

Together, the renewable energy sources generate approximately 100 megawatts per hour (Mwh) of energy annually, roughly equivalent to the energy used by 12 average households.

The solar array and twin wind turbines generate enough power to meet all the needs of the office building and also power the lighting in the adjacent parking lot.

The five batteries can also provide backup power to the building for up to four hours in case of a power outage. They can store that energy when it is not needed. 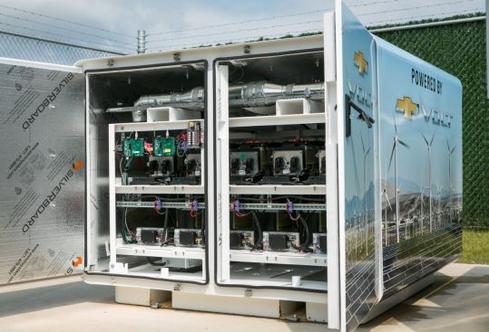 GM is not the only car company that's looking for different ways to use its battery technology for projects other than automobiles. Recently Tesla Motors, producer of ultra-cool electric cars, announced that it would enter the home market. A few months later, Daimler AG -- maker of Mercedes-- detailed a similar program.

In the case of GM, the combination of green energy sources delivers net-zero energy consumption on an annual basis. The reuse of Volt batteries also helped the data center administration building attain LEED Gold certification from the US Green Building Council.

"Even after the battery has reached the end of its useful life in a Chevrolet Volt, up to 80% of its storage capacity remains," Pablo Valencia, senior manager of battery life cycle management at GM, said in a statement. "This secondary use application extends its life while delivering waste reduction and economic benefits on an industrial scale."

Valencia also noted the system is ideal for commercial purposes because a business can derive full functionality from an existing battery while reducing upfront costs through reuse.

The company is also working on secondary applications for the used batteries, working with partners to test other potential commercial and non-commercial functions.

This isn't the first time GM has found practical, environmentally friendly uses for parts of its vehicles. Last year, the company revealed that an adhesive employed in the production of the 2015 Corvette Stingray could help prevent white-nose syndrome, a deadly fungus appearing on the muzzle and other parts of hibernating bats.

When processed, the adhesive can serve as a stalactite in artificial bat caves, which gives hibernating bats more surface area from which to hang, thus spreading them out around the cave.

The company also creates bat houses out of scrap Volt battery covers that can hold up to 150 little brown bats each. So far 232 of these bat houses have been installed on its properties and other places in the US.

Nathan Eddy is a freelance writer for InformationWeek. He has written for Popular Mechanics, Sales & Marketing Management Magazine, FierceMarkets, and CRN, among others. In 2012 he made his first documentary film, The Absent Column. He currently lives in Berlin. View Full Bio
We welcome your comments on this topic on our social media channels, or [contact us directly] with questions about the site.
Comment  |
Email This  |
Print  |
RSS
More Insights
Webcasts
Building the SOC of the Future: Next-Generation Security Operations
ROI and Beyond for the Cloud
More Webcasts
White Papers
A Technical Deep Dive on Software Exploits
IDC Workbook: Best Practices for Cloud Security
More White Papers
Reports
Evolution of Ransomware Gangs
2020 State of DevOps Report
More Reports

A great idea. Just because the battery can no longer perform up to the level required in a moving vehicle doesn't mean it won't fit in just fine in a less space-critical environment. But this all may be short lived. Billions are being poured into Lithium-ion battery research all over the world, and the present generation may soon be relegated to antique status.
Reply  |  Post Message  |  Messages List  |  Start a Board

This is awesome. I hope more and more awareness of such things can be created so that we start recycling things rather than marking them as useless.
Reply  |  Post Message  |  Messages List  |  Start a Board

"Just because the battery can no longer perform up to the level required in a moving vehicle doesn't mean it won't fit in just fine in a less space-critical environment."

@Gary: I think the more batteries are recycled, the friendlier it will be for the environment. You're right that a battery never becomes completely useless and that it can perform equally well in a less critical environment. Unfortunately, the idea of battery recycling is still not very common and needs more focus.
Reply  |  Post Message  |  Messages List  |  Start a Board

"The company is also working on secondary applications for the used batteries, working with partners to test other potential commercial and non-commercial functions"

I think all the companies who use these batteries should be part of the process whereby they accept the old batteries from their consumers. I remember Nokia taking that initiative sometime ago and setting up recycling centers to collect them. Other companies must be made to follow a similar practice.
Reply  |  Post Message  |  Messages List  |  Start a Board

I'll be honest; as I was reading the article, I was looking closely for any hint that this was more of a PR stunt by GM and less of a real application. There has to be a catch, right? The numbers provided, the LEED certification, and the interest in similar applications from other companies all point towards this being pretty legit, though. Good for GM - good for all of us. The announcements from Tesla and Daimler AG specify that they're going to be offering home batteries that are new products based on their car batteries - not just repurposed car batteries. I wonder if GM will be developing a new, specialized battery for this purpose to sell to other companies? Perhaps one whose lifecycle is based around industrial use, and can switch more smartly?

Am I the only one who's interested in knowing a little more about the bat preservation thing? The article from GM actually specifies that it's actually the waste that's cleaned off of the adhesive-applying machines every so often that are the 'perfect shape' to make artificial stalactites - these must be some pretty big machines, then! It also mentions that they do outreach programs to involve local kids in the building of these bat houses, which is great - I wish I'd done more stuff like that as a kid. Seems like a great way to get them involved in putting technology and environmentalism together. At a certain point you have to set your knowledge that a lot of this is targetted PR aside, and lay down your cynicism in favor of all the great work being done. Good job, GM!
Reply  |  Post Message  |  Messages List  |  Start a Board
Editors' Choice
Hot Topics