50%
Tweet
As part of iPhone and Apple Watch launch hoopla, 500 million iTunes subscribers get U2's "Songs of Innocence" for free. But what do Apple and U2 hope to gain?

Perhaps the biggest announcement (unless you like overpriced watches) at Apple's event Tuesday was that U2's new album, "Songs of Innocence," is being given away free to Apple's 500 million iTunes subscribers. The announcement sent shockwaves through U2's fan community and sent them scrambling to iTunes to download the album. As a U2 fan, I can tell you Apple's site and iTunes' ability to play the album were briefly down right after the announcement, but quickly came back in time for fans to be thrilled.

The business case for U2 to do this is clear. Album sales are down worldwide and even a powerhouse like U2 could be unlikely to sell more than a million or so copies. Their last album, admittedly a bit of a commercial failure, sold 1.1 million copies in the US. Music sales are in a bigger decline since that album was released in 2009. U2, like most bands these days, makes its money playing live; it's expected to make hundreds of millions from LiveNation for the next tour. With record sales in decline, getting the album distributed to a potential audience of half a billion people is the best way to make sure the tour is a success. 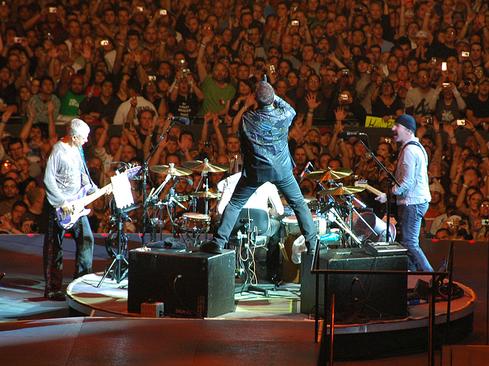 The harder part to figure out is what is in it for Apple. Apple will be using the music as part of a $100 million marketing campaign for the new iPhone and iWatch. But clearly, Apple could have simply bought the songs if that's all it wanted.

One possibility is to get back some users to iTunes. Many Android users (such as me) abandoned iTunes when they replaced their iPods with Android devices. Live streaming services such as Spotify are also cutting into the iTunes market share. Despite the robust user base, iTunes has a lower market share than it has had since 2006.

If this is the strategy, there are problems with it, however. For one, the deal is only for five weeks. After those five weeks, it is assumed that it will be available for streaming or download on non-Apple devices. At that point, users like me, who downloaded iTunes to hear the new album, will likely delete the app.

There's also this problem of reduced sales for music. If there are fewer people interested in albums (as opposed to digital singles), how many people will actually flock to iTunes even if the album is free? Even if you assume the free tag leads to 10 or 20 million people (instead of the 1 million who bought the last album), how many of those users are non-iTunes users? Even half (or all) would be a drop in the bucket with 500 million existing users. And how long will they stay?

Another reason Apple may have chosen to do it is to simply add cache and "cool factor" to the new products. After all, Apple did this with a special U2 iPod which is widely given credit for launching the iPod from early adopter status to mainstream icon. Again, the problem with that is that U2 is not quite as cool now as it was then. As a giant fan it pains me to say it, but their long held title of "biggest band in the world" carries less weight as the band ages. Wouldn't new Apple partner Dr. Dre have produced more of a cool factor at this point?

Exactly what Apple was thinking is unclear. But it provides a fantastic test for the current health of the freemium model and the use of content to bolster platforms. U2's impact on the announcements of yesterday bears watching for this reason alone. In the meantime, enjoy U2's new album. I've only gotten to play it twice, but it is very good.

David has been writing on business and technology for over 10 years and was most recently Managing Editor at Enterpriseefficiency.com. Before that he was an Assistant Editor at MIT Sloan Management Review, where he covered a wide range of business topics including IT, ... View Full Bio
We welcome your comments on this topic on our social media channels, or [contact us directly] with questions about the site.
Comment  |
Email This  |
Print  |
RSS
More Insights
Webcasts
Enterprise Database Strategies for 2020
DevOps: Innovating with Speed, Security, and Quality
More Webcasts
White Papers
Container Security Best Practices: A How-To Guide
A Guide to the Iranian Threat Landscape
More White Papers
Reports
The Threat from the Internet--and What Your Organization Can Do About It
The New Face of IT Automation
More Reports

Good point @SFTechReader. Buying the rights to U2's album was a ploy to get a quick rush of credit cards into iTunes. It doesn't matter that U2 isn't cool anymore; what they are is extremely popular. That's why it was worth the investment for Apple. Just for sheer numbers, U2 is the perfect band for a ploy like this.

But everything still rests on quality. The whole gimmick backfires if the album is lame. No one has the patience for another mediocre U2 album and if the album leaves people cold word will get around fast. We shall see. I've only listened to a few songs, and none have fired me up. I need to give it a full listen. But if it's anything like their last hot mess of an album (2009's No Line On The Horizon), Apple definitely won't find what it's looking for in this partnership (I couldn't resist).
Reply  |  Post Message  |  Messages List  |  Start a Board

I have never used mobile payments before but I could certainly see myself using ApplePay. Apple already has my credit card info and I like that they won't track my purchases. Also, I like being able to buy stuff online through ApplePay, without having to give my credit card info to little online stores with poor security. I think they packaged everything for ApplePay smartly and it will actually take off. Also, it is much safer than the other mobile payment solutions on the market right now since they won't even keep my credit card numbers on my iPhone and they will scan my fingerprint through TouchID. I trust Apple more than Google since they aren't trying to gather all possible data about me like Google does.
Reply  |  Post Message  |  Messages List  |  Start a Board

@SFTechReader: You've nailed it. music has been a loss leader for Apple from the very beginning, makes perfect sense that they would use the U2 giveaway to pave the way for ApplePay.

@SFTechReader- That's a very astute observation. I was bugged by having to give them my credit card info for a free album. I almost stopped because they haven't done a great job protecting people's private stuff lately. But, you know, U2.

Anyway, that is certainly part of the equation and one I had not considered. Thanks.
Reply  |  Post Message  |  Messages List  |  Start a Board

I believe Apple is doing this to boost the number of credit cards they have on file before they launch ApplePay. Notice that the free album is only available through the first week in October, and ApplePay will launch the second week in October. Apple is trying to get anyone who doesn't have an iTunes account to sign up now to get the free U2 album. To sign up for iTunes, you have to give a valid credit card number. So Apple is simply trying to get even more people signed up to iTunes so that they will be ready to start using ApplePay without having to enter credit card information later. It will be easier to get people to use ApplePay is they can use it without having to enter credit card info at the cash register. That's my take.

@whoopty- Not only the same tactics but the same playbook. I think the closed ecosystem is still working for them from a profit perspective. But Apple must realize that the hot bar in town can't stay the hot bar forever. People leave to find the new one. So what is surprising to me about this one is they seem to be content to just ride it out trying the same stuff.
Reply  |  Post Message  |  Messages List  |  Start a Board

@Doug- Now see, if Apple really made a time machine, I'd be an Apple customer again. :)

Seriously, I think you are right that it is an attmept to be cool again. But can't they see that cool changes? I mean, they bought Beatz, presumably because they see cool there. They've got Dre and Jay-Z to tell them what is cool now.

As a serious U2 fan, if the best Apple can do to figure out what is cool is to go back a decade, they're in real trouble.
Reply  |  Post Message  |  Messages List  |  Start a Board

While I don't necessarily think Apple's move is a bad plan, it smells of typical old tactics of circling the wagons, working for the close ecosystem which is proving increasingly less viable as the more open mediums take the lead in the smartphone, tablet and many other tech markets.

It's probably an attempt to draw people back to itunes, as well as get people to think about using Apple hardware around the time of a new product launch. "Oh I don't have an iPhone any more, maybe I'll get the new one and download a free album."

Perhaps not, but Apple's traditional tactic isn't to innovate, so pushing hard for a download platform isn't too surprising.
Reply  |  Post Message  |  Messages List  |  Start a Board

Apple's angle is a desperate attempt to say, "Hey, we're still cool." And maybe U2 needs to turn the "we're still here" crank, too. Cool-in-the-1990's-and-2000's birds of a feather flock together. Mind you this is coming from a guy who owns two iPads, three iPods, an iMac, a Macbook and a Time Machine.
Reply  |  Post Message  |  Messages List  |  Start a Board
Editors' Choice
Hot Topics