50%
Tweet
The partial opening of Tesla's Gigafactory will give the electric car manufacturer the ability to make the majority of components under one roof, including lithium ion batteries.

Tesla Motors has opened a part of its massive Gigafactory, where the electric carmaker plans to house most of its manufacturing process under one roof, while reducing costs and allowing the company to vastly increase production.

The factory, located outside Sparks, Nev., is where Tesla expects to begin cell production in 2017. By 2020, the facility will reach full capacity and produce more lithium ion batteries annually than were produced worldwide in 2013.

The Associated Press reported July 26 that the facility, while open, is only 14% complete. When it's finished the massive building will be one of the largest in the world, with an area of about 10 million square feet.

Tesla says centralizing operations will drive down the per kilowatt hour (kWh) cost of the company's battery pack by more than 30%, an important cost savings for a company that has not yet turned a yearly profit. 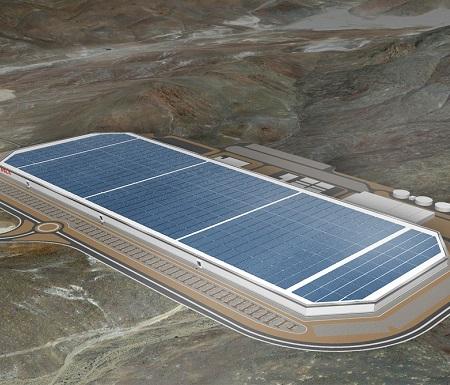 The Gigafactory will be managed by Tesla, with Panasonic as the principal partner responsible for lithium-ion battery cells. The Japanese electronics firm will occupy approximately half of the planned manufacturing space.

In addition to the cutting-edge technology inside, Tesla is also using the Gigafactory to demonstrate its commitment to sustainability at all levels of production. The facility will be powered, at least in part, by solar panels on the roof.

Getting the facility up and running will also be integral to the success of the latest production vehicle, the Model 3, which debuted to much fanfare earlier this year and led to a crush of pre-sales orders, which some analysts doubt the company will be able to fill.

At the same time, some analysts see the risk in producing a massive amount of batteries at once: A dearth of actual sales or production delays could leave Tesla exposed.

"They could be left with a lot of excess capacity in the near term," Navigant Research's Sam Abuelsamid told the AP.

The opening of the Gigafactory follows the publication of CEO Elon Musk's broader vision for the company. That plan includes proposals to move his company beyond electric cars and batteries, including ones for heavy-duty trucks and for high-passenger-density urban transport, which is something luxury carmaker Daimler is currently developing.

In other Tesla news, The Wall Street Journal reported Wednesday that the carmaker has parted ways with Israeli company Mobileye, a key supplier of its Autopilot system, which was responsible for handling the ADAS and semi-autonomous driving components of the system.

"I think in a partnership, we need to be there on all aspects of how the technology is being used, and not simply providing technology and not being in control of how it is being used," the paper quoted Mobileye's chief technical officer Amnon Shashua as saying during an earnings call.

The decision comes in the wake of a fatal crash involving a Tesla vehicle, which was in autopilot mode at the time of the accident. The collision raised fresh concerns over the safety of self-driving vehicles.

Nathan Eddy is a freelance writer for InformationWeek. He has written for Popular Mechanics, Sales & Marketing Management Magazine, FierceMarkets, and CRN, among others. In 2012 he made his first documentary film, The Absent Column. He currently lives in Berlin. View Full Bio
We welcome your comments on this topic on our social media channels, or [contact us directly] with questions about the site.
Comment  |
Email This  |
Print  |
RSS
More Insights
Webcasts
Building a Strategy for Detection and Response
5 Steps to Integrate SAST into the DevSecOps Pipeline
More Webcasts
White Papers
Cybersecurity Research: 2019 AWS Cloud Security Report
Securing Real-Time Communications for Dummies Book
More White Papers
Reports
AI-Augmented Attacks and the Battle of the Algorithms
Cyber AI: An Immune System for Email
More Reports

Tesla has me really excited for the future. Musk recently unveiled that it had hit all the points in his master plan he laid out 10 years ago. If the plans he has for the next 10 years come to fruition, we're in for some really exciting developments over the next decade.

That gigafactory is crazy though. I can't believe how big it is.
Reply  |  Post Message  |  Messages List  |  Start a Board
Editors' Choice
Hot Topics