23 comments
Comment Now
When it comes to digital devices, a little cleanliness – both inside and out – goes a long way. 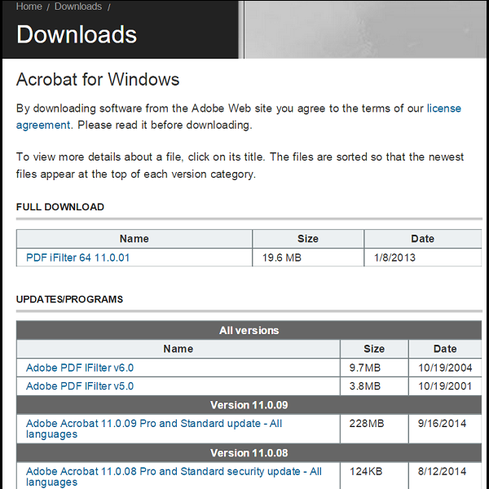 Ignoring software updates
Nobody likes to install software updates -- they always seem to demand our attention at the wrong time (which is always). Update messages are easy to ignore, but doing so is a big mistake. Cyber criminals love to exploit vulnerable apps, of course, particularly Oracle Java. Security vendor Kaspersky reports that in 2013 more than 90% of attempts to exploit vulnerabilities that it detected targeted Java. Windows components, Adobe Acrobat Reader and Flash Player, Android, and Internet Explorer are popular targets as well, though on a much smaller scale.

One caveat: Security researchers recently warned of a shady group known as "DarkHotel" that targets WiFi users in upscale hotels. The attackers send hotel guests bogus pop-up alerts to download Adobe software updates. But those who do so get a dose of malware instead, Wired reports. The solution: When you're away from a trusted network, manually download updates and new versions from the official Adobe Acrobat website. (The same advice applies to update messages from other vendors, too.)

If the phone is 'dirtier' than the toilet, shouldn't the toilet be 'less than' the phone?
Reply  |  Post Message  |  Messages List  |  Start a Board

"workers in the enterprise are often guilty of hygienic gaffes such as spilling lattes and muffin crumbs all over their laptops and desktop keyboards."

This is one of the reasons that around every corner in the office we have wipes and small hand vaccum cleaners (because they're under powered, the don't make much noise when someone uses them)

I know at least once every couple of weeks all clean up my entire area only because I can't concentrate.... other collegues aren't so disciplined (you should see there cars...OMG)
Reply  |  Post Message  |  Messages List  |  Start a Board

Maybe it's a flow chart arrow rather than a greater than / less than sign. You touch the toilet. You touch your phone. Your phone ends up with the bacteria from the toilet.
Reply  |  Post Message  |  Messages List  |  Start a Board

Many folks I work with don't clean regularly either. I know of a desktop support tech who carries nitrile gloves with him to cubical/office house calls. Probably smart, now that I think about it.
Reply  |  Post Message  |  Messages List  |  Start a Board

Great tips.  I think cleaning and maintaining a computer is one of the things all consumers should remember.  When I went to school, I saw students eating while using the computer.  Some people think their computers are their dinning table.
Reply  |  Post Message  |  Messages List  |  Start a Board

@jagibbons: Nitrile gloves. That is hilarious. and smart. My husband once dropped his phone in a public toilet AT A GAS STATION! And despite my horror, he continued to use it after letting it dry out in a bowl of rice. (I made sure the rise was disposed of before he decided to cook it and serve it in our next meal). I woudln't go near the thing with a hazmat suit but as far as I know he never got sick from it.
Reply  |  Post Message  |  Messages List  |  Start a Board

I'm guilty as charged when it comes to bad habits no. 1 and no. 3. I scatter my files around my desktop the same way I scatter my shoes around my house. Terrible habit. and I am an unrepentant eater and drinker at my desk.

One question for the hivemind, though: Most antibacterial wipes have alocohol in them. Isn't that a no-no when cleaning smartphone and laptop screens?
Reply  |  Post Message  |  Messages List  |  Start a Board

Don't know what I'd do with a phone in the toilet. Hopefully, I never use it or drop it there.
Reply  |  Post Message  |  Messages List  |  Start a Board

>Most antibacterial wipes have alocohol in them. Isn't that a no-no when cleaning smartphone and laptop screens?

But given that the company's suppliers have been accused to using toxic chemicals like benzene for screen cleaning, I have to wonder.
Reply  |  Post Message  |  Messages List  |  Start a Board

I know the slideshow properly defines me, but most people aren't that refined. ALthough I do clean my computer and phone on a regular basis, and I also organize my desktop in the best possible way, but I have multiple passwords though I use the same on facebook and gmail and other sites except net banking sites.
Reply  |  Post Message  |  Messages List  |  Start a Board
Page 1 / 3   >   >>
Editors' Choice
Hot Topics