on intermittent or unreliable connections, he said, but here the key thing is that "we're integrated at the network layer" into the simulations.

"I use it more as an alternative to text and SMS -- and I tend to do more texting -- but it is nice to hear my mom's voice and my friends' voices," Wilson said.

According to Lenio, having voice communications arrive as voicemail also tends to be better for scheduling so that tasks not be interrupted. She didn't reply to my first message right away, because she received it at about 7:00 a.m. Hawaii time, and in the cramped crew quarters it would have been rude to talk into her phone when others weren't yet awake. Then she went out on extravehicular activity (EVA) before calling me back.

Once started, our conversation proceeded as a staggered stream of one-way messages (with a certain amount of "Um, yeah" verbal clutter thrown in to make up for the lack of an immediate response).

I asked if they were getting a sense of how lonely a Mars mission would be. John Young, the astronaut whose career stretched from Gemini to the Space Shuttle, with two Apollo missions in between, once said that travel to Mars would be a whole different kind of lonely. I'm paraphrasing from memory; he spoke to a Society of Professional Journalists event I attended more than 20 years ago, but the phrase stuck with me. Young had experienced the loneliness of manning an Apollo command module, stuck in orbit while two colleagues explored the surface of the noon. (He later got his chance as a Lunar Excursion Module pilot.)

If it's realistic to suppose an expedition to Mars would consist of something like six people on the surface, the HI-SEAS crew doesn't see loneliness as the biggest challenge.

"This is probably the most intense social thing I've ever done," Wilson said. "We're around each other 24/7. We have a tiny little bedroom and don't spend much time in that. I probably have more interaction here with people in a day than I did in a week in my cubicle job.

"We're not lonely; we're isolated," he said. "Those are two fairly different things in this circumstance."

"It's a little like being on a camping trip," Lenio said. "We're isolated from society, I guess, and it's hard communicating. But at the same time, you're with people all the time, and you're never alone." 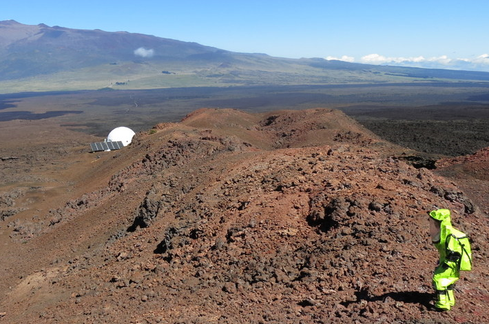 Wilson said the harder part is being isolated from nature. "Only being able to go outside in a hazmat suit is tough. There's no wind on your face, no fresh air -- it's not the same at all." (He has also blogged about that aspect of the experience).

Though Voxer and email work pretty well through the communications loop, Lenio said, accessing the limited set of whitelisted Internet applications available to the crew can be awkward. Sometimes it simply doesn't work; communications are garbled by the message-delay software.

The mission also has to operate on a limited supply of solar power, and on occasion an overcast day will make that difficult, she said. Even on a normal day, it's important to finish cooking supper before the sun goes down, or there may not be enough power for the stove.

The highly scripted nature of a NASA mission, real or simulated, can be an irritant. The HI-SEAS crew complaints are not so different from the picture of life in orbit aboard the International Space Station as described in Charles Fishman's article in the current issue of The Atlantic Monthly.

"Unless something breaks down, we pretty much know what we're going to be doing for the day," Lenio said.

"Yeah, we don't have too many good surprises here," Wilson said. Most of the time, boredom is the bigger enemy.

That makes it all the more important that team members tend to get along with each other. "We're in really good company here, so we don't feel that isolated," Lenio said. "I think they did a really good job picking the crew."