0%
Tweet
Pebble, the Kickstarter success story, continues its upward climb through the wearables market thanks to a deal with Best Buy, which has exclusive preorder rights for its Time smartwatch.

Another day, another smartwatch enters an increasingly crowded marketplace. This time, it's Pebble Technology, with the company announcing preorder sales for its Time smartwatch through Best Buy retail stores.

The Pebble Time smartwatch lists for $199.99 and includes free shipping. It is currently available in black, white, and red, with expected delivery around the middle of July.

The Pebble Time preorder announcement this week follows Apple's highly publicized and closely watched Apple Watch, which has met with mixed reviews even as it raises consumer awareness of smartwatches in general. Earlier this month, Apple began expanding the sales of the Watch with online preorder and in-store pickup.

Outside of Apple's massive media splash, a slew of consumer electronics companies are making investments in the market, including LG, Huawei, HP, Samsung, and even traditional watchmakers like TAG Heuer, which is targeting the same luxury market as Apple. 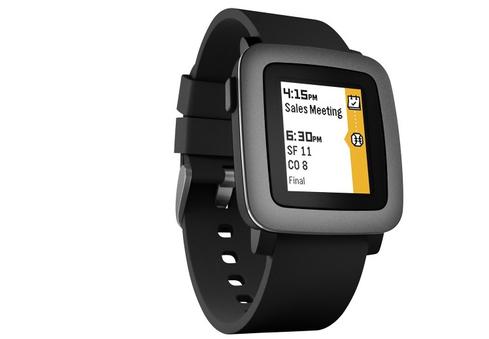 According to IT research specialist NPD Group's Connected Intelligence Wearables report, released in April, smartwatch ownership in America is forecast to reach 9% of the adult population by 2016.

Similar research from CCS Insight indicated that while awareness of smartwatches and fitness devices is high, the consumer electronics industry had better articulate the benefits of wearable devices if it is to survive the hype surrounding wearable technology.

In the UK and the US, 75% of respondents said they are aware of smartwatches, compared with 63% in the company's 2013 survey, but just 3% of those surveyed own and use one, while 2% own one but no longer use it.

Smartwatch display unit shipments are expected to grow 250% year-over-year, reaching a record 34 million units in 2015, led by demand for the Apple Watch, according to a recent report from IHS.

With Pebble, the company is hoping that lot of features and the device's flexibility make the Time smartwatch stand out.

Featuring a color E-Paper display and up to seven days of battery life, the Pebble Time device also features a new timeline interface which turns information, as well as updates like notifications, calendar events, weather, sports scores, breaking news, and missed calls, into pins that let users see what's ahead or catch up on what's already happened.

The Time, which connects to both Google Android and Apple's iPhone smartphones, is water resistant up to 100 feet and is compatible with activity tracking apps from Jawbone, Fitocracy, Runkeeper, and Misfit.

[Read more about the market for wearables.]

If you want to keep to the beat while working out, Pebble smartwatches also work with Pandora, iHeartRadio, and other music streaming services.

With a warehouse of more than 8,000 applications available on the Pebble app store, plus thousands of independent apps, hundreds of watch faces, swappable covers from GadgetWraps, and watch bands, options for customization are extensive.

On the hardware side, the Time features a built-in microphone for voice notes and quick replies, and a Marine-grade stainless steel bezel with physical vapor deposition (PVD) coating in either matte finish or polished finish.

The smartwatch also features an array of sensors, including a 3D accelerometer, a compass, an ambient light sensor, and a microphone.

Users can charge the device using a magnetic USB cable. A vibrating motor allows for discreet alerts and alarms.

Nathan Eddy is a freelance writer for InformationWeek. He has written for Popular Mechanics, Sales & Marketing Management Magazine, FierceMarkets, and CRN, among others. In 2012 he made his first documentary film, The Absent Column. He currently lives in Berlin. View Full Bio
We welcome your comments on this topic on our social media channels, or [contact us directly] with questions about the site.
Comment  |
Email This  |
Print  |
RSS
More Insights
Webcasts
DevOps: Innovating with Speed, Security, and Quality
Securing Active Directory the Way it Deserves
More Webcasts
White Papers
CyberSecurity Trends 2020
A Guide to the Iranian Threat Landscape
More White Papers
Reports
The Threat from the Internet--and What Your Organization Can Do About It
The Definitive Guide to Managed Detection and Response (MDR)
More Reports

Its indeed a great article and worthy knowledge. I have my opinion that we have a smart watch already available for comparison and lets wait and see its future as compared to the previous one.
Reply  |  Post Message  |  Messages List  |  Start a Board
Editors' Choice
Hot Topics