Google researchers have compared the security practices of experts to non-experts, and identified several ways that typical Internet users can improve their online security.

In the 1976 thriller Marathon Man, Nazi war criminal Dr. Christian Szell tortures runner "Babe" Levy to find out whether it's safe for him to retrieve diamonds stored in a bank deposit box.

It isn't safe online, but many people try to achieve some measure of security by keeping their passwords safe in their heads.

"No one can hack my mind," explained one person responding to Google researchers about security practices.

Someone could beat you about the head, a technique euphemistically known as "rubber-hose cryptanalysis," to obtain your secrets. It didn't work in Marathon Man, but it can.

Fortunately, that's not a scenario likely to concern most Internet users. But it demonstrates one of several vulnerabilities that come with trying to remember passwords. There's another issue that may be more relevant: Memory doesn't scale. Trying to remember multiple passwords, if they're as complex as they should be, is a recipe for failure.

Google software engineer Iulia Ion, research scientist Rob Reeder, and user experience researcher Sunny Consolvo set out to explore the difference between security experts and the rest of us. They detailed their findings in the paper "Comparing Expert and Non-Expert Security Practices," which they presented at last week's Symposium on Usable Privacy and Security.

[ Are we our own worst enemies when it comes to security? Read Google: Your Password Security Questions Are Terrible. ]

The difference in security practices between the two groups is striking. The researchers conducted two surveys -- one polling 231 security experts and the other polling 294 Internet users who are not security experts. The latter group was recruited from Amazon's Mechanical Turk crowdsourcing platform.

Among respondents who are not security experts, 42% consider the use of antivirus software to be among the top three things one can do to stay safe online. Only 7% of the security experts polled believe that. Instead, experts prefer keeping software updated. "AV is simple to use, but less effective than installing updates," said one. 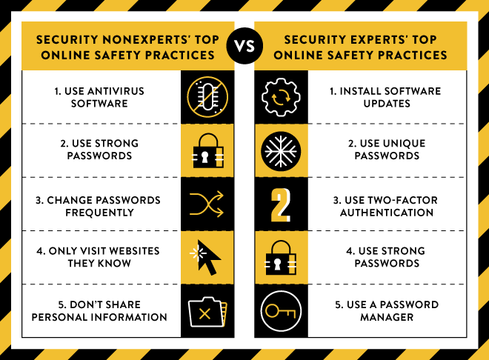 When it comes to passwords, only 24% of non-experts polled said they used password managers for at least some of their accounts, compared to 73% of experts. The research paper suggested that non-experts don't trust password management companies. That may not be an entirely unreasonable stance, given the recently reported breach of LastPass. However, experts observed that using a password manager allows people to have passwords that are both strong and unique.

Non-unique passwords present a risk, because attackers will often try passwords they obtain at other websites to find accounts they can hijack. If they're successful, further compromises may follow.

Security experts don't always follow their own advice – the report noted that 38% of security experts admitted to clicking on links in email messages from unknown senders, compared to only 12% of non-experts -- so perhaps each group can learn from the other.

The report's major shortcoming, beyond limitations identified in the study, is the absence of data on the results of these security practices. Is it safe if we patch, use a password manager, and employ two-factor authentication? We may think we know, but it's difficult to be certain.

Thomas Claburn has been writing about business and technology since 1996, for publications such as New Architect, PC Computing, InformationWeek, Salon, Wired, and Ziff Davis Smart Business. Before that, he worked in film and television, having earned a not particularly useful ... View Full Bio
We welcome your comments on this topic on our social media channels, or [contact us directly] with questions about the site.
Comment  |
Email This  |
Print  |
RSS
More Insights
Webcasts
People Are The Most Important Part of Autonomous SOC
Don't Miss This Cybersecurity Virtual Event
More Webcasts
White Papers
A Business Case for Vulnerability Remediation Orchestration
The Infoblox Q4 2020 Cyberthreat Intelligence Report
More White Papers
Reports
Key Strategies for Managing New Risks in Cybersecurity
Are Unprotected Cloud Databases Leaking Your Data?
More Reports


I know it would be useful as I constantly forget infrequently used passwords. I just can't bring myself to trust the password safe technology it just seems very risky. In the interim I wish there was a password standard in place the constant changing requirements for differing sites is a big problem. It makes remembering passwords close to impossible.

I've been using a password manager for a while and it's proved the only way to up my security across the board. Now everything has a unique, impossible to remember password, so I have upwards of 40 different ones. There's no way I could have recalled all of those and reuse would certainly have happened without it.
Reply  |  Post Message  |  Messages List  |  Start a Board

I think I know part of the answer on antivirus. To the non-expert, antivirus is often inaccurately seen as that single biggest component of computer safety. In their defense, it was 10-15 years ago. Today, however, it is just one piece of a very complex security portfolio. The security expert is going to be aware of all the other pieces that need to be in place.
Reply  |  Post Message  |  Messages List  |  Start a Board

Surprising information some of it I would've expected the clicking on links in emails I was completely surprised by I never do that! also very surprised that so many people do not know what multilevel authentication was? Maybe it was the way the question was asked. I would like to know more about why they felt antivirus software was not as important as so many of us feel it is .
Reply  |  Post Message  |  Messages List  |  Start a Board

This is interesting information, but agree that it isn't terribly useful without details supporting the premise that the experts are safer because of these practices.
Reply  |  Post Message  |  Messages List  |  Start a Board
Editors' Choice
Hot Topics