Netflix's slightly tongue-in-cheek invention shows that the Internet of Things is way too complicated for consumers.

You've heard of the Staples Easy Button? Netflix has invented the lazy button. The Netflix Switch is a button that will dim your lights, turn on your TV, and automatically start your Netflix queue for you. Netflix calls it "the switch," but the Internet seems to have settled on "Netflix and Chill" Button.

It tells us a lot about the current state of the Internet of Things (IoT).

Netflix is not selling the button. It's giving you directions on how to make your own. Think of it as half Amazon Button and half viral-marketing ploy. You get to build something and tinker with electronics, which should be relatively easy for an IT professional. And then you get to connect it to an IoT environment, including whatever smart hub you have controlling your lights.

Really, by the time you're done making this thing, you deserve to binge-watch a little Orange is the New Black. Check out the video:

One of the obvious missed opportunities in the video is it suggests you order food with your phone before pushing the button. Bah! There's no reason you can't rig the button to order the food, too. We've seen pizza and coffee ordering buttons. And recently, Dominos pizza has made it possible for you to order pizza by sending an emoji. I'm pretty sure we can rig this thing to send an emoji. Netflix suggests this as an option in its instructions, but I'm saying this is a must.

Netflix and Chill simultaneously taps into what is awesome and what is silly about IoT from a consumer perspective. It is clearly poking a little fun at the Amazon Dash button that can be used for ordering detergent or toilet paper or any number of individual household supplies. On the other hand, it is also making fun of the complexity of most smart hubs these days. Setting "moods" for lighting is one thing. Smart hubs all do that. And setting enough rules to create a "Netflix and Chill" button is probably possible with some hubs if you're an expert. But Netflix is basically saying that, right now, it is easier to make your own button (using its deliberately funny and slightly vague zillion-step process) than to try to work with existing IoT tools. 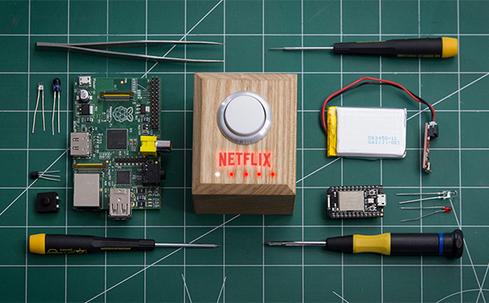 In other words, the company is capitalizing nicely on the idea that we want technology to interact with us like we're people and not machines. Netflix positions itself as human-based technology company (your mileage may vary). Its analytics are aimed at our habits as watchers. IoT technology, on the other hand, tends to emphasize the data over the human. Netflix, not being born from the IoT, doesn't think that way."

Whether this sells more Netflix subscriptions or gets people to make their own buttons or not (and it probably won't), it provides some thoughtful lessons in the way IoT needs to be humanized. It needs to be interconnected, and it needs to work the way we live.

[ What else is standing in the way of IoT? Read Internet of Things: What's Holding Us Back. ]

We don't come home from work and only order a pizza or only dim the lights or only watch a movie. We come home and live a life. We need to integrate IoT into one seamless experience, rather than having buttons all over the house that control different things. It's the lack of integration (despite some efforts) that is probably holding back the IoT from a consumer perspective. What Netflix is basically saying is that the IoT's user experience is bad. And it is hard to argue that point.

What do you think? Will you make a Netflix button? Does it give you the idea for other buttons? Do you think a lack of lifestyle integration is what is holding back the IoT? Tell me in the comments section below.

David has been writing on business and technology for over 10 years and was most recently Managing Editor at Enterpriseefficiency.com. Before that he was an Assistant Editor at MIT Sloan Management Review, where he covered a wide range of business topics including IT, ... View Full Bio
We welcome your comments on this topic on our social media channels, or [contact us directly] with questions about the site.
Comment  |
Email This  |
Print  |
RSS
More Insights
Webcasts
People Are The Most Important Part of Autonomous SOC
Nip Ransomware in the FUD: Detecting Attacks Pre-Encryption
More Webcasts
White Papers
Why Add Security to Your Skill Set and How to Do It
Intelligent Outcomes Are Key to Business Resilience
More White Papers
Reports
The Infoblox Q4 2020 Cyberthreat Intelligence Report
2021 Top Enterprise IT Trends - Network Computing
More Reports

@tzubair, I agree one hundred percent. I do not believe what advertisements say at face value EVER! I am definitely not gullable. I also think that Androids are user friendly, and I personally own one right now. I base whether something is easy and user friendly based on trying it out for myself and asking others that had or have such devices. I do not run out and buy the latest device immediately, because of my reservations in buying a device strictly off of advertisements.
Reply  |  Post Message  |  Messages List  |  Start a Board

@Dave, I would always worry what if... as nothing private anymore... plus easy way to do create need for customer... pizza and netflix... or it just a message in the brain ??? now we never know for sure???
Reply  |  Post Message  |  Messages List  |  Start a Board

I actually have a friend who went all-in on smartening up his home with an Amazon Echo and Hue lightbulbs. While it is amazingly cool, the bulbs were not cheap and not without headaches to set up. Now, that's execusable, if the long term convenience outweighs it, but the jury's still out on that one. Hearing him say 'Alexa, turn on the bedroom lights' is incredibly sci-fii, but when he's just going in there to grab his keys and then has to say it again to turn them off five seconds later instead of just turning them on himself, it's a bit silly. One time I went to turn them off myself and he said 'don't do that. You'll de-sync them.' Are you kidding me? This embodies your point exactly, Dave. Would we want that smart button to order food every time we sit down to watch TV (well, maybe some would)? It's all a bit cumbersome for now. I also want the record to show that I love 'Netflix and Chill' memes.
Reply  |  Post Message  |  Messages List  |  Start a Board

"It is tons of buttons, unintegrated buttons that don't work together I have a problem with."

@David: Tons of buttons can rightly be a big nuisance, but who's there to integrate it? In other words, who's there to "talk" to Netflix, Some Pizza Service and Some Popcorn Service to invent one button or a set of similar buttons which the user can use together. I don't think any company is working on this at the moment.
Reply  |  Post Message  |  Messages List  |  Start a Board

"Eventually we will get to the point where the things we do everyday, can be facilitated a bit better by the IoT. Until then we can tinker with funny little buttons."

@Kstarton: That's what I was also thinking while reading through it. If every company starts inventing their own "button", pretty soon we might have a huge collection of buttons all around and be utterly confused and cluttered. What you need is consolidation amongst the IoT services so that one common interface controls multiple applications.
Reply  |  Post Message  |  Messages List  |  Start a Board

"From this point on, I only want to buy products that are convenient, user friendly, and super easy. Other than that, it's not worth my time, energy, or money"

@AngelFuego: At times, the products may seem to be very intiuitive and user-friendly because of the way they are marketed. In reality, that may not always be the case. Users may be led into beleiving that something is very user-friendly because of the way people perceive it to be. Take the example of Apple - in actual iPhones are not very different from let's say Android when it comes to the interface but they are marketed to be super user-friendly.
Reply  |  Post Message  |  Messages List  |  Start a Board

There is a certain draw to being able to hit a button to get your pizza ordered , dim your lights and put on your queued up Netflix show after a long day. (and whether Netflix and chill is a code word for more than just sinking into the couch and vegetating is up to you.) I'm not going to make a button, but I can see why some might. Eventually we will get to the point where the things we do everyday, can be facilitated a bit better by the IoT. Until then we can tinker with funny little buttons.
Reply  |  Post Message  |  Messages List  |  Start a Board

Whoopty and Dave: Yes. I like that idea. is the buttons are in sync, it does make the experience more convenient and seamless. From this point on, I only want to buy products that are convenient, user friendly, and super easy. Other than that, it's not worth my time, energy, or money.
Reply  |  Post Message  |  Messages List  |  Start a Board

Dave, I agree. I find it frustrating to have many different devices, so I would definitely not want to have different remotes for devices with buttons for separate things. A universal button pad would suit me best. I think consolidating haven't been to one space would work better for me. I am the type of person who gets frustrated by all the different charging cord they have each of my different devices. I think that there should be a universal cord for all devices. it may seem like I'm getting off topic, but to me it's the same concept.
Reply  |  Post Message  |  Messages List  |  Start a Board
Page 1 / 2   >   >>
Editors' Choice
Hot Topics