The decision to reclassify ISPs under FCC regulations represents a triumph for open Internet activists.

Handing a significant victory to supporters of net neutrality, the Federal Communications Commission voted on Thursday to adopt rules that reclassify suppliers of broadband Internet access as telecommunications services under Title II of the Communications Act.

The 3-2 vote was hailed by President Obama, who has supported net neutrality, which is the principle that network traffic should be treated in a non-discriminatory manner.

In a letter posted on the White House website, President Obama observed that an overwhelming majority of the 4 million people who wrote to the FCC about the issue expressed support for a free and open Internet.

FCC Chairman Tom Wheeler also emphasized the role of the millions of citizens who made their wishes known to the agency, underscoring the political power of the connected public. "We listened," he said in a statement. "We learned. And we adjusted our approach based on the public record. In the process we saw a graphic example of why open and unfettered communications are essential to freedom of expression in the 21st century." 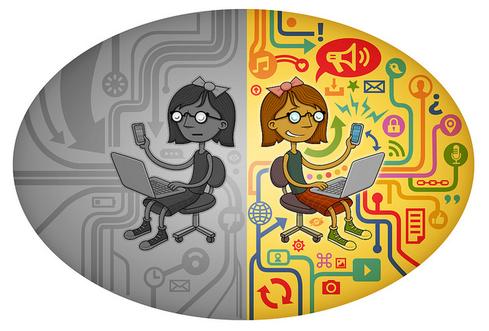 Verizon, one of the telecommunications companies that have been fighting the FCC's efforts to regulate broadband access for years, called the FCC's ruling a throwback to 1930s rules, as if the age of a law somehow determines its relevance. To impugn the FCC decision by association, Verizon issued its statement in Morse code and, for the sake of actually having anyone read its objections, in a font designed to look like the blurred type from a Remington Riviera typewriter.

"Today's decision by the FCC to encumber broadband Internet services with badly antiquated regulations is a radical step that presages a time of uncertainty for consumers, innovators and investors," said Verizon in its statement.

In November 2014, Verizon General Counsel Randal Milch said in a blog post that Title II reclassification, as well as a weaker hybrid approach, "fairly guarantees litigation." And AT&T, another opponent of the FCC's reclassification plan, has already put forth potential legal arguments opposing the changes in filings submitted to the agency.

Outside of the telecom industry, academics and advocacy groups celebrated. Stanford Law Professor Barbara van Schewick said in a blog post: "Today's vote is among the greatest public interest victories in U.S. history," and predicted the FCC's rules will hold up in court.

American Library Association president Courtney Young called the decision "a win for students, creators, researchers, and learners of all ages."

The Electronic Frontier Foundation voiced similar approval, mixed with wariness about possibility of government overreach: "[N]ow we face the really hard part: making sure the FCC doesn't abuse its authority."

Thomas Claburn has been writing about business and technology since 1996, for publications such as New Architect, PC Computing, InformationWeek, Salon, Wired, and Ziff Davis Smart Business. Before that, he worked in film and television, having earned a not particularly useful ... View Full Bio
We welcome your comments on this topic on our social media channels, or [contact us directly] with questions about the site.
Comment  |
Email This  |
Print  |
RSS
More Insights
Webcasts
How Elite Analyst Teams are Transforming Security with Cyber Reconnaissance
ROI and Beyond for the Cloud
More Webcasts
White Papers
A Technical Deep Dive on Software Exploits
Five Reasons to Protect your VPN with Multi-Factor Authentication
More White Papers
Reports
Email Security Threat Report 2020
DNS Network Traffic Volumes During the 2020 Pandemic
More Reports

@mak63, it all depends on the point of view and also long term planning ahead... but in my books you never know untill you see it...
Reply  |  Post Message  |  Messages List  |  Start a Board

@Tony A at Canada we have simular problems but one of the biggest players Bell have the same ideas.... sad reality of corporate greed
Reply  |  Post Message  |  Messages List  |  Start a Board

Our government needs to stop looking at things as an ideology. We need to stop looking at things as one siding with the other and look at things in a logical perspective of how to achieve a certain goal. All this utopia of net neutrality is going to fade quickly once we see what it really is I suspect. All this purist ideology on the other side is missing points about the relationship of law to technology.
Reply  |  Post Message  |  Messages List  |  Start a Board

I concur. We need to rid the intersection of the law and technology from ideology. This was an ideological move that was not transparent. All ideologies need to take a step back and stop fighting to usurp transparency and discussion because they are so religious about their ideology.
Reply  |  Post Message  |  Messages List  |  Start a Board

Without transparency, without releasing the regulations prior, without testifying to Congress as requested, on a partisan vote, the internet becomes more like a public utility. And this is praised? I am shocked that some would praise this and not understand its true implications. Most of all I am shocked and dismay at those who praise but warn we now have to be wary of government overreach. Those who ask that must know no history. History is of the world is one of government overreach when they can. That is why there is a  Constitution. Schmidt it was I believe who once called the internet an experiment in anarchy; but now I wonder if it is under control of aristocracy.
Reply  |  Post Message  |  Messages List  |  Start a Board

@Broadway0474- I think you have them right. It saddens me that technology is a battleground for political ideaology. It is best when it is above that, but sadly nothing is anymore. We can't even agree on basic science as truth anymore. It is all about "belief."
Reply  |  Post Message  |  Messages List  |  Start a Board

kstaron, didn't the 3-2 vote go along partisan lines? And isn't this issue always along partisan lines, with Republicans siding with Comcast, AT&T and other big players, and Dems siding with Big Tech and net neutrality? The Republicans would have scuttled it in Congress if they could have, but they knew they couldn't get the Dems to act on anything in time. Or are my facts not straight?
Reply  |  Post Message  |  Messages List  |  Start a Board

Hmmm, Verizon and AT&T. I don't know why but this sounds an awful lot like the voice of Ma Bell. It sounds like she's all broken up and trying to pull it together. And this ruling just hurts. The sense of entitlement, to profit from the sale of bandwidth on a public network... it is all ruined by this ruling. Why not try something new - perhaps some honest ways to make money rather than monopolizing basic infrastructure components? Or is that too radical? Well something tells me that these beheamoths won't be pulling out of the ISP business any time soon. Too bad their coffee only came with milk and sugar and no whipped cream.
Reply  |  Post Message  |  Messages List  |  Start a Board

OOH, The internet companies are mad because they can't hike rates for a "fast lane' creating a class system in internet speeds. I love how the FCC said that they listened and moved forward according to the public when it was a 3-2 vote. Did 40% of the FCC not get the message or are they shills for Verizon? Unfortunately this doesn't look like this is over. I expect Verizon and AT&T will make this stink with long term litigation.
Reply  |  Post Message  |  Messages List  |  Start a Board
Page 1 / 2   >   >>
Editors' Choice
Hot Topics