Following several days of rumors, Microsoft agreed on Monday to buy Mojang, the Swedish developer that created Minecraft, for $2.5 billion. Given Microsoft's past gaming successes, such as Halo, an investment in Minecraft might seem a departure. Whereas Halo features cinematic flair, cutting-edge graphics, and lots of action, Minecraft lets gamers use Lego-like bricks to build digital universes and relies on graphics that might have seemed impressive a decade ago. Why did Microsoft decide to purchase Mojang, and what other details are simmering behind the scenes? Here are six reasons Microsoft's new acquisition is turning heads.

1. This isn't a risky investment for Microsoft.
Two-and-a-half billion dollars sounds like a like a lot of money, but Minecraft is both profitable and growing. According to The Wall Street Journal, privately held Mojang earned $360 million in revenue last year, up 38% from the previous year. In a video announcing the deal, Xbox head Phil Spencer noted that Minecraft is the best-selling online game ever on the Xbox 360.

Microsoft said in a statement that it expects the deal to break even during its fiscal 2015. Though reportedly not a motivating factor in the deal, Microsoft will pay for Mojang with funds held overseas. Because these funds would have been subject to taxes if brought back to the US, this move further ensures that the deal will be profitable.

2. People create amazing things with Minecraft.
An open-world game with few rules, Minecraft has attracted a dedicated community of gamers who build incredible things. The Dutch government recreated the entire country using Minecraft, for example, and if you're a Lord of the Rings fan, check out this amazingly detailed rendering of Minas Tirith: 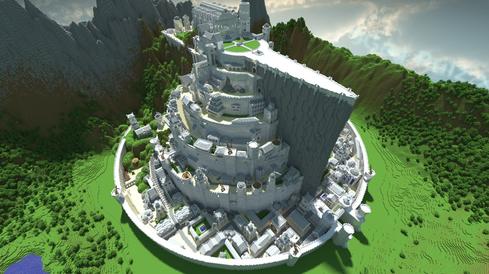 3. Minecraft's creator was ready to hand over the reins.
In a blog post, Minecraft creator Markus "Notch" Persson expressed relief following the deal. He said the game's popularity had turned him into a "symbol," but that he just wants to be a "nerdy computer programmer who likes to have opinions on Twitter. It's not about the money. It's about the sanity."

Mojang spokesman Owen Hill said in a statement that Persson and the company's two other founders plan to depart as part of the deal. Although this change in leadership might be distressing to some Minecraft fans, Hill emphasized Microsoft was among "only a handful of potential buyers with the resources to grow Minecraft on the scale that it deserves."

4. Microsoft will keep supporting Minecraft on other platforms.
As products such as Office for iPad demonstrate, Microsoft CEO Satya Nadella believes in cross-platform strategies. Minecraft reportedly will follow

It's a privately-held company, and the figure refers only to highest disclosed revenue, and that's from 2013 to boot-- so our insight into the company's current financials are limited. But I see your point. Given Microsoft's aggressive break-even estimate, I suspect they're factoring in more than pure Minecraft revenue--i.e. they might also be anticipating certain ecosystem benefits, such as the article's suggestion that they might use Minecraft to drive device sales.
Reply  |  Post Message  |  Messages List  |  Start a Board

Azure cloud services and Microsoft's hosted game engine are running on the same Azure infrastructure. This is a Nadella move to broaden Microsoft's appeal and collect a new group of users -- typical of the moves he's trying to make and probably quite good for Microsoft in the long run.
Reply  |  Post Message  |  Messages List  |  Start a Board

Not sure how involved OneDrive will be, but I expect Azure will be running everything in the background. What that implies, aside from a potentially infinite digital canvas for gamers, I'm not as sure. What do reader think?
Reply  |  Post Message  |  Messages List  |  Start a Board

Do you think Microsoft will encourage Azure or SkyDrive usage to store Minecraft assets and power Minecraft in-game capabilities?
Reply  |  Post Message  |  Messages List  |  Start a Board
InformationWeek Is Getting an Upgrade!