Digital media, smartphones, and social networks are shortening our attention spans. But our brains are adapting nicely, according to research from Microsoft Canada.

The main culprits are social media, smartphones and other mobile devices, and digital streaming. In fact, at the average rate of the human attention span, and human reading speed, you moved on to something else as soon as you read that first sentence.

A few of you hung on for the second. Here's the most interesting part (if you stuck around): According to a study by Microsoft Canada, this is the result of our brains adapting to our environment, and it is a good thing.

Look, that was a lot to take in all at once. To reward you, let me give your brain something else to watch for a second. Here is a cat riding a Roomba:

I bet you enjoyed that for a couple of seconds, and then about 8 seconds in, you were ready to move onto something else.

That's because 8 seconds is the current average human attention span. After that, we usually go looking for another stimulus. You got your tiny dopamine fix at the beginning, probably smiled at the cat and then thought (or felt), "OK, I've seen this. What's next?"

Social media, multi-screening (using a phone or tablet while watching TV or using another device), and having instant access to our phones has created the need to keep feeding our brains. The next fix is just seconds away. 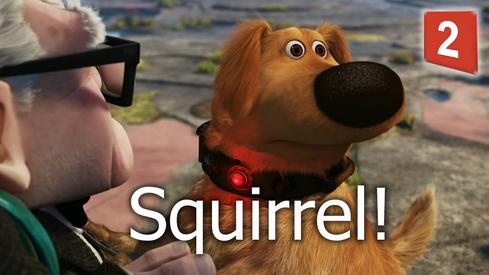 This is a behavior that is known and has been criticized in the past. This is part of the whole Google is making us stupid argument of Nicholas Carr, who said having information at our fingertips means we don't reason anymore. Back in March, I covered a study that showed that smartphones don't make us dumb so much as they make us lazy.

According to the Microsoft study, being lazy makes us smarter. Before I tell you how, your brain has been working very hard. Let me give you a new distraction. Here's a baby singing "Let it Go":

Was it hard to get through it all without looking at something else? That's because digital media and technology have trained you to "frontload" your attention span. You also concentrate in small, focused bursts.

Microsoft Canada's report is based on the results of a gamified survey of 2,000 Canadians conducted in the fourth quarter of 2014, plus field work conducted in December 2014 on 112 subjects using portable EEG and video. The 2,000 respondents to the online survey were divided into three equal-sized groups: low, medium, and high attention, each representing one third of the sample.

It also looked at the change in attention spans when people engaged with only one form of media at a time versus multiple screens simultaneously. The researchers found that study participants who were simultaneously engaging with multiple screens retained more information, were more engaged, and paid more attention than when those who were watching a single medium, like TV.

[ You think mobile devices are everywhere now? Check out what babies are doing with them. Read Meet Your IT Workers of the Future. ]

We've adapted our brains to certain auditory cues that basically say, "OK, you need to pay attention here," like a laugh in a sitcom.

In other words, we're not necessarily paying less attention throughout the day than we did before. We're getting

@PedroG You're better off. All diet guidelines say to stay focused on your food while while eating. Those who watch TV, check devices, or whatever don't really register the food that much and are more likely to overeat.
Reply  |  Post Message  |  Messages List  |  Start a Board

Sometimes (well, most of the time) I prefer task-switching, especially when my to-do list is long. If I focus too long on one project, I start to worry about all the other things I'm not doing. Breaking up each activity into chunks seems more productive, even if I'm only doing a little at a time.
Reply  |  Post Message  |  Messages List  |  Start a Board

@Broadway0474- Yes, true multi-tasking as I think we define it is still dificult to impossible. But task switching quickly is possible. You brain just breaks stuff up into tasks differently than we describe them with language. But I wouldn't try to write a story while juggling knives and singing the Friends theme. There are limits. :)
Reply  |  Post Message  |  Messages List  |  Start a Board

@technocrati- Well, if we're in direct competition with goldfish, I know the solution. Give them smartphones.
Reply  |  Post Message  |  Messages List  |  Start a Board

@Kelly22- Right, the alternative is to reject the technology which is cool. But it clearly isn't currently happening. If we want to go back to books and scrolls, our attention span will go up again, and pretty fast apparently.
Reply  |  Post Message  |  Messages List  |  Start a Board

At first, it seems strange to interpret this as good news. How could we be happy about our attention spans getting shorter? But you make a good point in saying that this is the world we have created. With emails, text messages and news updates popping up every few minutes (/seconds), our attention is being pulled in multiple directions at once - and that technology isn't going away. If we couldn't adapt, that would be a bad sign for the future.
Reply  |  Post Message  |  Messages List  |  Start a Board

@David yes, it's not natural for humans, especially young humans, to sit and stay focused for hours. I saw a video today of a school that is very successful at reaching its students, in part, by encouraging them to move and dance around in the class. See the video on Ron Clark Academy here

@ariella- I think doodling is a good analogy. Also fidgeting. There's been some evidence that fidgeting or even getting up and walking around helps us learn rather than sitting still.
Reply  |  Post Message  |  Messages List  |  Start a Board

@ariella- yeah, what I did was look into ADHD research. There are some studies on fruit flies among and other low attention span creatures designed to help with ADHD research. They are somehow able to image the brains of small creatures. i just don't understand the method. The important thing actually isn't the goldfish stat though. the far more important part of the stat is lowering the attention span 25% in just 13 years. That is amazing. And it shows we are adapting to something. The environment of a goldfish is fairly static.
Reply  |  Post Message  |  Messages List  |  Start a Board

<So when the study showed that multi-screening allowed us to remember more, it is because what we were doing is actually making better use of somehting that is already a part of us.>

@David I think that is rather like the effect of doodling during class. Some teachers take offense because they see it as a sign of the kid paying attention. But really it helps one stay more tuned in if occupied in that way. I think students who don't do anything are much more likely to totally space out and absorb less in the class.
Reply  |  Post Message  |  Messages List  |  Start a Board
Page 1 / 3   >   >>
InformationWeek Is Getting an Upgrade!

How to Submit a Column to InformationWeek InformationWeek Staff 4/9/2021
White Papers
SANS Institute Survey: The State of Cloud Security
A New Take on Cloud Shared Responsibility
The Impact of the SolarWinds Breach on Cybersecurity
ITSM for the Enterprise - What Makes it Work?
The Five Major Security Pitfalls of WFH and How to Solve Them