Microsoft has spent a fortune on product placement, often with hilarious results.

To tech companies, product placement has become increasingly mandatory, especially as BYOD and other recent consumer-centric trends have begun to influence enterprise IT spending and policies. Unfortunately for Microsoft, Google, and most of the others, many of us roll our eyes when we see real-world products unabashedly touted in TV shows and movies.

But product placement has its virtues -- and some tech companies could learn from the positive examples. Suppose Microsoft were to work with a filmmaker who thinks advertising is a threat to artistic integrity. What better way to accommodate this challenge than to make fun of product placement itself? That's the approach Wayne's World and 30 Rock took, allowing creatives to skewer the capitalist hands that feed them while still offering positive placement of sponsors' products.

This sort of postmodern subversion doesn't fit all stories, of course, but there are other humorous tactics tech companies could follow. Remember Demolition Man, in which all future restaurants have become Taco Bells because it was the only chain to survive the "franchise wars"? Actually pretty funny. Microsoft's Internet Explorer team has shown a flare for this kind of humor, but unfortunately, they're not the ones running the company's product placement strategy.

If self-deprecation doesn't work, a handful of movies have managed to integrate product placement so gracefully the advertising disappears into the story but somehow retains lingering subliminal power when the show ends. For this group, 1982's E.T. might be the standard-bearer. After watching a boy and his alien bond over Reese's Pieces, audiences rushed out to buy the candy, sending sales up 65%.

Unfortunately, the above examples tend to be the exceptions, not the rule. How bad can product placement get? Just watch this clip.

Back to tech companies. Thankfully, none of them has promoted itself quite as shamelessly as McDonald's did in the above clip from 1988's Mac and Me, a film whose creative bankruptcy is so staggering, it makes Twilight seem like Shakespeare. But that doesn't mean tech product placements are particularly effective. Apple's a clear exception. Its iPhones are so ubiquitous in movies and TV, it feels weird when a character pulls out any other kind of smartphone. But Google's efforts are somewhat harder to praise. Did you see The Internship?

Then there's Microsoft, poor, hapless Microsoft. Over the last few years, the company has poured a fortune into product placement efforts. The result? Windows 8's reputation is still in the gutter, IE is still widely (if unfairly) seen as a malware-attracting mess, and almost no one is using Windows Phone. In fact, I can recall only one instance when peers responded positively to a Microsoft movie appearance -- and that's the scene in 1999's South Park: Bigger, Longer & Uncut in which an Army general, enraged over apparent bugs in Windows 98, summarily executes Bill Gates. Given Gates's subsequent philanthropic heroics, I doubt the scene would draw the same cheers if it were released today -- but as you can see, Microsoft has an image problem. 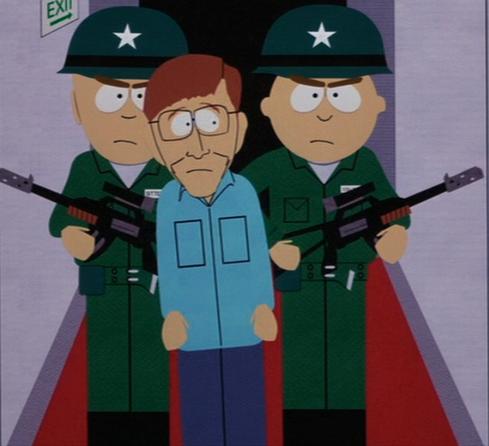 One of Microsoft's major struggles is simply that its product placement feels so forced. No one thinks of it as advertising when a character says, "Let's Google it," because, well, that's what people actually say in real life. But have you ever actually heard someone earnestly suggest, "Let's Bing it"?

Microsoft CEO Satya Nadella wants to recast Microsoft in the likeness of fast-moving cloud startups, which could help the company project some edge and cool. But until then, the company's TV and movie cameos need work. Here are four of Microsoft's most awkward product placement attempts. Let us know in the comments if we've missed any notable examples, and if you've noticed any other tech companies battling similar challenges.

1. The Island
Microsoft isn't the only company whose products show up in this 2005 sci-fi thriller -- far from it. At one point, director Michael Bay dollies in on a bottle of Michelob Light with the kind of fetishistic intensity that he otherwise lavishes only on star Scarlett Johansson. Apple's iMac also

While Microsoft's product placement strategy is still easy to make fun of, I have to give them credit for their straight-ahead ads and commercials, which have gotten a lot better in the last year. Early Surface ads were a mess; they didn't communicate anything about how the device is used or why someone might want one. But the Surface Pro 3 spot is actually pretty slick. And Microsoft's Super Bowl commercial was pretty inspired-- up there with some of the better Apple and Google ones.
Reply  |  Post Message  |  Messages List  |  Start a Board

Nice example,  Number 6. We could probably do another list of products that were scrapped shortly after appearing in TV shows and movies.

I don't watch that show, but have seen quite a few Windows phones -- on TV programs at least!

This has nothing to do with tech, but I caught a few (awful) minutes of Rizzoli and Isles, and one of them came hope, took off her heels, and put in a Dr. Scholl's gel. Ridiculousness squared. I think she was about to start talking about the gel, but I turned the channel.
Reply  |  Post Message  |  Messages List  |  Start a Board

I noticed the Surface placement in Elementary, the only show/movie you mention that I've seen (other than that long, dull Google commercial, 'The Internship' -- hey, we were on vacation, it was raining, and we had about eight TV channels, five of which were sports!). In Elementary, the product placement was really awkward, jarring, and awful; I realize brands have a tougher time these days, given more people watch shows via DVR, thereby skipping commercials, but surely there's a cleverer way to integrate a tablet's capabilities into a detective show? You'd think they could watch a surveillance video and zoom in on a clue, video-chat with a witness, or take their own photo or video of a crime scene or something. Heck, I don't know. I write about tech, not crime, but I think most tech writers could do a better job of coming up with realistic dialog than we've seen surrounding these products in recent entertainment offerings! I'm game to give it a try! :)
Reply  |  Post Message  |  Messages List  |  Start a Board
InformationWeek Is Getting an Upgrade!