Scott Kelly and Mikhail Kornienko, two astronauts working on the International Space Station, explain how they use Microsoft's HoloLens in space.

Microsoft's HoloLens can offer out-of-this-world experiences to users. Now it's taken its own journey -- to space. Scott Kelly and Mikhail Kornienko, two astronauts aboard the International Space Station (ISS), are set to put the augmented reality headset to use.

A couple of HoloLens devices arrived on the ISS this week, along with over 7,700 pounds of supplies including food and science experiments, reported Popular Science.

The publication had the chance to interview Kelly and Kornienko, who are spending over a year on the ISS as part of a larger experiment to discover how long periods of time in outer space affect the human body. As of the interview's publication, they had been in orbit 257 days.

[Have an idea for a HoloLens app? Microsoft wants to hear it.]

The use of HoloLens aboard the ISS is part of a partnership between Microsoft and NASA, which was announced earlier this year. The two initially teamed up in January to develop software called OnSight, with the goal of enabling scientists to virtually work on Mars with HoloLens.

Toward the end of June, the partnership took on a new initiative called Sidekick. This project is intended to use HoloLens to provide virtual aid to astronauts aboard the ISS.

"The goal of Sidekick is to enable station crews with assistance when and where they need it," said NASA. "This new capability could reduce crew training requirements and increase the efficiency at which astronauts can work in space."

Kelly, who had the opportunity to test HoloLens before his space mission began, explained two situations in which HoloLens would be useful in outer space: interacting with equipment and going through a list of procedures. The team currently uses a computer or an iPad to view procedures.

"And if you could have a procedure right in your field-of-view, something that was command-able with your voice, you know where you could scroll through the different steps, that would be helpful," Kelly told Popular Science.

He also noted how if he's wearing HoloLens, people on Earth can see what he sees and write in his field of vision.

"So let's say we're working on a piece of hardware, and we're not that familiar with it, but we have an expert on the ground," he said. The ground-based experts, he continued, could "make annotations, point to things, and kind of lead us through a particular activity." 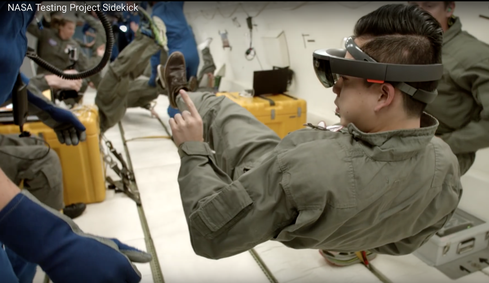 Remote Expert Mode uses Skype to let ground-based employees see what the space crew sees. Prior to HoloLens, the team has relied on written and vocal communications to conduct experiments or do complex repairs.

In Procedure Mode, the crew can view standalone procedures with animated holography displayed on top of the objects they are using. This would cut back on the necessary training for future space crews, and prove invaluable when teams eventually venture deeper into the solar system and encounter communication delays.

Microsoft's HoloLens has been evolving since it was first announced in Jan. 2015. A dev kit for the headset, which displays interactive holograms overlaid on physical objects, will be available in early 2016 for $3,000.

Kelly Sheridan is the Staff Editor at Dark Reading, where she focuses on cybersecurity news and analysis. She is a business technology journalist who previously reported for InformationWeek, where she covered Microsoft, and Insurance & Technology, where she covered financial ... View Full Bio
We welcome your comments on this topic on our social media channels, or [contact us directly] with questions about the site.
Comment  |
Email This  |
Print  |
RSS
More Insights
Webcasts
Fact or Fiction? The Truth About Cloud Native Security
Leveraging Infrastructure as Code to Streamline Security & Operations
More Webcasts
White Papers
The Buyer's Guide to Next Generation Cloud Security Posture Management
The New Risk Equation: Motives, Means, Opportunity
More White Papers
Reports
State of the Intelligent Information Management Industry in 2021
Why You're Wrong About Operationalizing AI
More Reports