Kids And Tech: How Much Is Enough? - InformationWeek

On the question of kids and screen time, educators and cognitive scientists still have more questions than answers.

Cue holiday shopping music. A camera pans around a typical suburban living room strewn with wrapping paper and boxes. It comes to focus on an 18-month-old baby lying on her belly. Her wide, gleeful eyes are lit by the glow of an iPad on the floor in front of her as she stabs at the moving images on its screen with tiny, curious fingers.

As the modern world has embraced computing as a basic life skill, parents have come to view their kids' interaction with electronic devices as an admirable development on the path to becoming a competent adult. And most parents, especially first-time parents, are looking for signs of precociousness in their children.

We've all heard parents brag about their very young kids and technology: "Danny already knows how to unlock Mike's Android. Can you believe it?" Did moms and dads in the 1930s gush to friends when their tykes correctly dialed the knob of the family's Victor Orthophonic Victrola radio?

[Raise your kid the IT way. Read Parenting Tips From IT Pros.]

But educators and cognitive scientists still aren't sure what the long-term impacts are of exposing very young children to smartphones and tablets. Interactive screens -- a relatively new feature -- have largely eliminated the need for typing skills. Remove the keyboard, and you remove the last input barrier for very young children.

The early state of the research hasn't stopped some professionals from issuing scary warnings, such as pediatric occupational therapist Cris Rowan's column, 10 Reasons Why Handheld Devices Should Be Banned for Children Under the Age of 12. But Rowan mixes older research on the negative effects of passive TV watching and violent video games with much newer studies about interactive, computer-mediated experiences.

Instead of banning devices, some experts advise parents to integrate technology into their interactions with their children, creating a shared experience. Screen Sense: Setting the Record Straight -- Research-based Guidelines for Screen Use for Children Under 3 Years Old, a guide released by the nonprofit Zero to Three, offers an example. 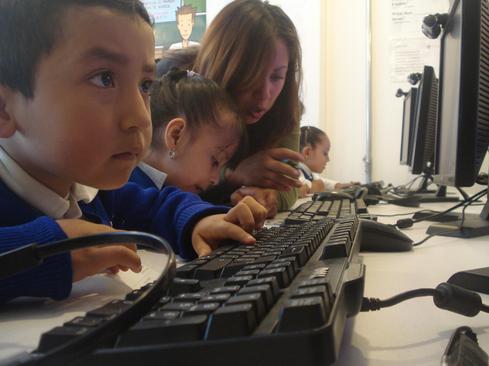 Other early-childhood experts cite potential benefits to being computer-savvy at a young age. For example, some research indicates that hand-eye coordination is faster in kids who use technology -- something you might have witnessed first-hand if you've ever watched a middle schooler navigate Minecraft.

Speaking of speed, does being connected to the Internet create fast, self-sufficient learners? It can be argued that children with different learning styles now have many more options, from e-books to YouTube videos and, on the horizon, virtual-reality headsets.

Nevertheless, experts say the neuroscience simply isn't in yet. While longitudinal studies on the effect of technology on children wind their way through the peer-reviewed journals, here are a few tendencies some educators have observed in their students.

The questions remain: How should we interpret these observations and use them to advise parents and teachers? What will these behavioral and cognitive traits mean in the future workforce, and how should employers prepare for the next generation of workers?

Ellis Booker has held senior editorial posts at a number of A-list IT publications, including UBM's InternetWeek, Mecklermedia's Web Week, and IDG's Computerworld. At Computerworld, he led Internet and electronic commerce coverage in the early days of the web and was ... View Full Bio
We welcome your comments on this topic on our social media channels, or [contact us directly] with questions about the site.
Comment  |
Email This  |
Print  |
RSS
More Insights
Webcasts
What We Can Learn from Sports Analytics
Strategies for Success with Digital Transformation
More Webcasts
White Papers
From MFA to Zero Trust
Two-Factor Evaluation Guide
More White Papers
Reports
Evolution of Ransomware Gangs
2020 State of Cybersecurity Operations and Incident Response
More Reports

I wholly agree the three bullet points will remain an issue. While reading this I decided I didn't want to wait for the results of all the research into screen time (I blame the entire Internet for my impatience).
Reply  |  Post Message  |  Messages List  |  Start a Board
Editors' Choice
Hot Topics